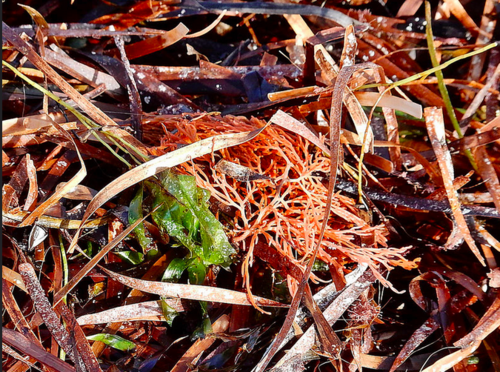 Seaweed tea is a form of liquid fertiliser created from seaweed.

Seaweed contains a variety of over 70 vitamins, minerals and enzymes, along with natural growth hormones, so it's a useful fertiliser for the garden.[1] While chopped seaweed can be added direct to soil, or used as a mulch, seaweed tea can be poured over young plants as a food and booster.[1]

Obtain seaweed. Be sure that it's legal to collect seaweed if you're getting it off the beach. Otherwise, you may need to purchase it from a garden centre. (For a small amount of seaweed tea, it may be possible to use the flat seaweed sheets used to make sushi, but it's not the cheapest option!)

It's probably a good idea to wash off the seaweed before making the tea, to remove excess salt that might not be a useful addition to your garden. This may, or may not be necessary, as the amount of salt residue on seaweed might be insufficient to affect a garden.[1] However, by being cautious, you have less to be concerned about.

Stuff the seaweed into a container such as a barrel, small tank or large bucket. Whatever you use, it must have either a lid or a cover, to stop additional water from getting in and diluting it before you're ready to use it. Be generous with the amount of seaweed. Then fill with water.

Let the soaking seaweed stand for several weeks. The seaweed tea is ready for use when it turns a pale brown colour.[1] It should also no longer smell of ammonium.[2]

Find a porous sack, such as a hessian (burlap) feed sack. Stuff it with seaweed. Place the bag into a barrel of rainwater, with lid firmly placed on top. Allow to soak for a few weeks. To keep it smelling better, you can add a bit of EM liquid.[3]

Once the seaweed tea is ready, you can remove the amount needed for use and add more water and seaweed in for soaking, to keep the tea topped up and ready for the next use.

To use, the seaweed tea must be diluted. Dilute at a ratio of approximately 1 parts to 10. For example, one litre of seaweed tea to 10 litres of water, in a watering can.

Use as a liquid feeding tonic, a starter feed for seedlings just planted and as a leaf booster. It goes well on cucumbers, tomatoes, zucchinis and strawberries.[3] Application at early growth stage is especially beneficial to plants but it can also be helpful pre-flowering or seed setting and just prior to harvesting the plant.

It may also help to prevent the growth of fungi on plants.[1]