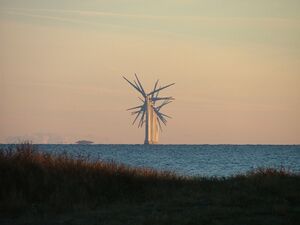 The 140% Renewable Energy Island of Samsø. The small island of Samsø has reduced its carbon footprint by 140%[1] in the past decade. In 1997 the Danish government held a competition. They challenged contestants to convert their energy supply to 100% renewable energy within a 10 year period.

The small island of Samsø, a 20x6 mile islet nestled between the hustle and bustle of Copenhagen's island, Zeeland, and the mainland Jutland won the bid. It is only accessible by ferry and has no original power plants of its own. This combination made Samsø an ideal candidate for Eco-Revolution.[2]

Samsø is 100% self-sufficient with wind-generated electricity.

With renewable energy the island produces 70% of the residents heating needs. The other 30% is met through imported petroleum, 100% of which is compensated for by wind turbine energy.

So much energy is harvested from the wind that Samsø sells the energy back to the neighboring mainland of Denmark.[3]

Wind power is not the only sustainable rout being taken, solar panels, renewable wood pellet and straw furnaces are used to generate hot water for residents.

Typically in Denmark, a home creates its own heat through an oil burning furnace. On the island residents have collectively opted into the district's heating plants to save money and reduce their carbon footprint.[4] 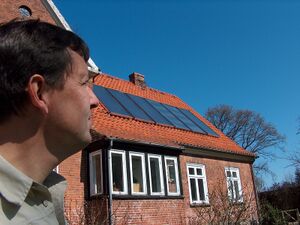 Denmark ranks among world leaders in wind technology generating a total of 20% of their nations electricity through wind turbines. Samsø has managed to produce 100% of its electricity by harvesting the abundant wind.

The island's wind producing fleet is made up of four outcroppings of wind turbines. Eleven turbines are on land and ten are positioned offshore.

Biogas: farmers on the island are working towards a plan to harvest biogas from pig farms' slurry (a viscous mixture of manure). Not only will this produce electricity, but will provide households with home heat.

In the future the transport sector will see its vehicles retrofit with energy efficient modifications such as canola oil, bioethanol, hydrogen or electricity. Such conversions expect to be seen once the technology becomes economically feasible.

The Samsø Energy Academy offers courses and workshops to help residents and scientists prepare for the future. 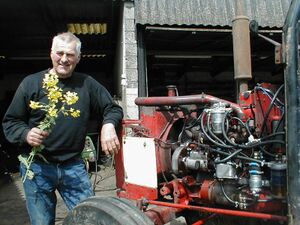