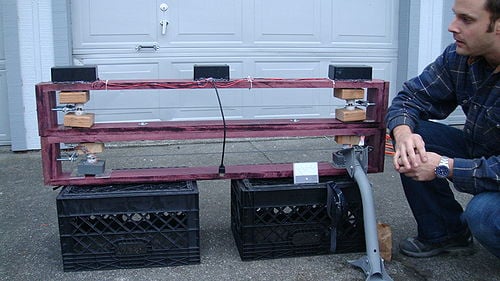 The Humboldt Bay Center for Sustainable Living, in cooperation with Danco Builders, have commissioned several projects to inform hostellers staying above the Samoa cookhouse (the future home of the Hostel at Samoa) about sustainability. One such project is The Buzzards' Windbelt™ system. The Team known as The Buzzards consists of Bob Xuesi, Ryan Dunne, Dustin Wiesner, and Dustin Revel. The Buzzards were given the task to charge USB devices using a Windbelt™ or an array of Windbelts™. The Windbelt™ was invented by Shawn Frayne to provide emergency lighting in third world countries.[1] Shawn was intrigued by the principle of aero-elastic flutter and designed the Windbelt™ to convert the power generated by this principle to usable electricity. This project will inform hostellers about this technology, and demonstrate that it has real world application. The Windbelt™ is not the solution for all of our future energy challenges but it is one of the many technologies that together will someday allow us to live sustainable lives. 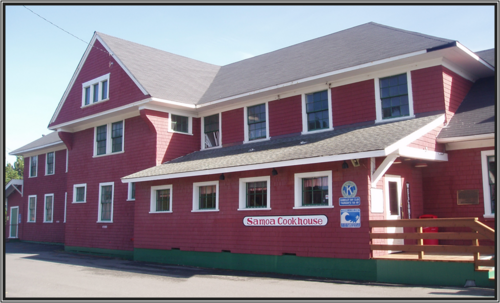 Danco Builders, in cooperation with the Humboldt Bay Center for Sustainable Living, is building a Hostel above the Samoa Cookhouse. The hostel will educate residents about topics related to sustainable living and will utilize several projects built by Engineering 215 students; one of these projects is a Windbelt™.

In 2004, Windbelts™ were invented by Shawn Frayne who founded Humdinger LLC and patented the invention. A Windbelt™ converts wind into electrical energy, like a wind turbine but uses a fluttering belt rather than spinning propellers to create electricity. The Buzzard's double-mounted Windbelt™ design is based on Humdinger's "Medium" Windbelt™ and is capable of charging USB devices brought by hostellers.

The objective of this project is to create an array of wind belts that will charge a cell phone as well as educate and inspire occupants of the Eco-Hostel about alternative wind energy systems.

A list of criteria and constraints were developed to recognize what characteristics and abilities the Windbelt™ must possess or not possess. 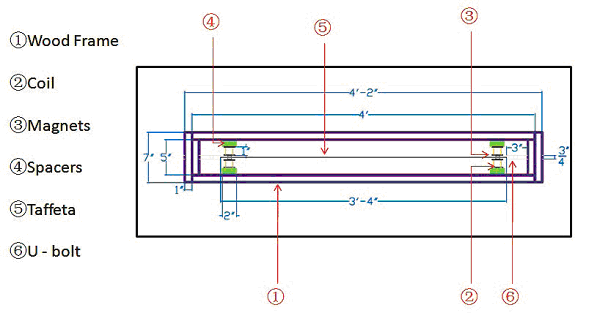 The final solution is two, four foot long Windbelts™. Each Windbelt™ utilizes four 200 ohm coils and eight N52 Neodymium magnets. Two coils are mounted in each corner of the frame and each coil has two corresponding magnets mounted on a Mylar coated taffeta belt. The belt is attached on each end with a custom clamp mounted to a U-bolt, allowing the belt to be tensioned on either end. The frame is built out of Purpleheart, a very hard and weather resistant wood, because there is a large amount of tension exerted on the frame. With average wind, the system is expected to provide between one half to one watt of power to for charging USB devices. 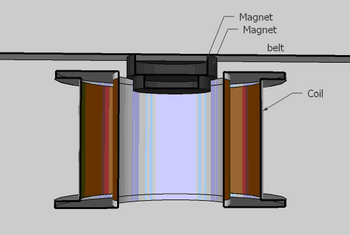 This design will be used at the Hostel located on the second floor of the Samoa cookhouse to charge USB devices, such as cell phones, that hostellers bring. The Windbelts™ will be mounted, using satellite dish mounts, on the roof of the cookhouse facing north. A wire carries the current generated by the Windbelt™ from the roof to a female USB port mounted in the building. An ammeter is mounted above the port that displays the amount of current being delivered to the USB device. 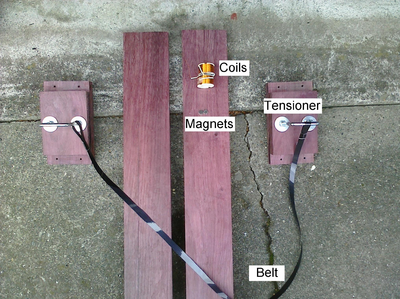 The major components of one of our Windbelts™ from our MultiBelt Windbelt™ are shown. This includes the frame, tensioners, coils, magnets, and the belt. 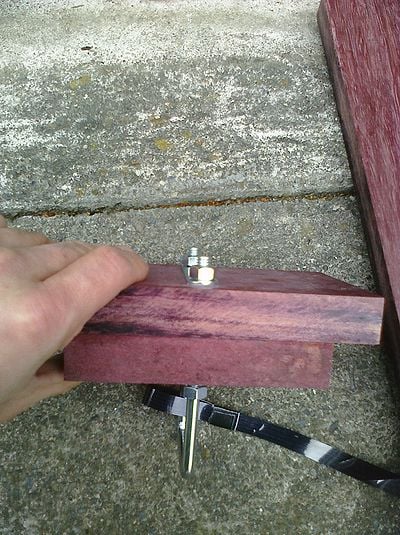 Part of our tensioning system is shown. It allows the belt to be tightened and loosened. These pictures show the first version of the system. The first version tensioned our belt based on how far we tightened the nuts along the U-bolt. However, the belt had to be attached to the U-bolt via sewing and glue. The design was modified so that the U-bolt was put into the frame from the outside, and two washers were added to each U-Bolt (as can be seen in the video below) so the belt could be clamped between two washers - keeping it from sliding and also simplifying temporary adjustments. 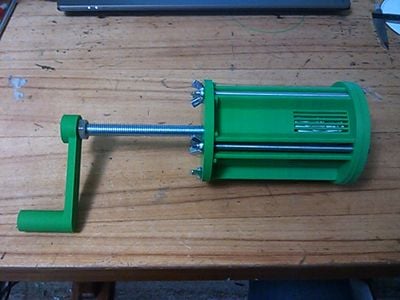 One of the Windbelts™ being drilled for assembly. 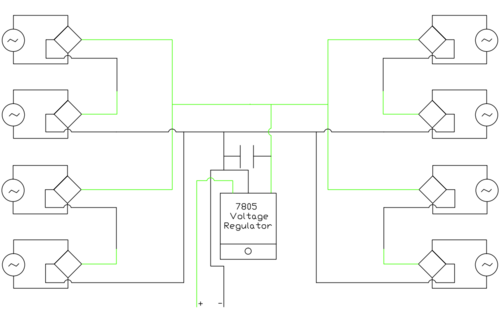 The wiring diagram above shows the systems electronics from the coils (~), through the rectifiers (diamonds) to the voltage regulator. 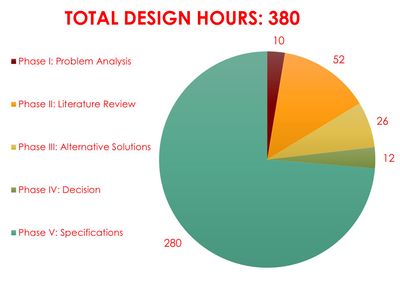 Using a 24" circular fan, the system of two Windbelts™ system produces .64W before the electricity is converted to DC and is regulated to 5V. After losses incurred in these steps the output to USB devices is .4 watts. We expect similar results at the Samoa Hostel on windy days.

Based on our research and testing we have designed the most appropriate Windbelt™ for the Samoa Hostel climate; however, there are a few components that could be improved. 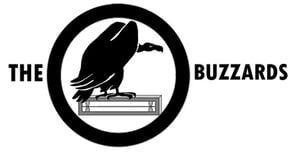 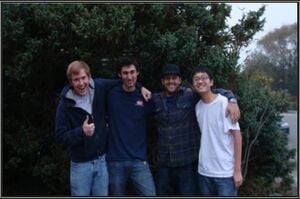 The Buzzards would like to give a special thank you to the following people, and organizations for their invaluable help in planning, designing, and building our Windbelt™ .