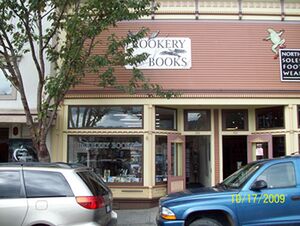 This webpage is an energy retrofit analysis of a local bookstore in Arcata, CA that was completed by Redwood Coast Energy Authority.[1]

Rookery Books, shown in Figure 1, is a small business located on the west end of the Arcata Plaza. Rookery Books is a retail book and magazine dealer that has operated under the same ownership and at the same location for thirteen years. 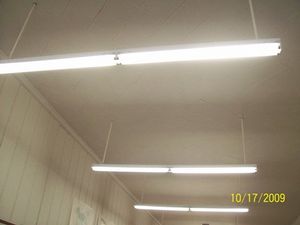 Figure 2: The new light fixtures replaced in Rookery Books by the RCEA(Photo by Jessica Bruce).

Prior to the RCEA's retrofits, Rookery Books used inefficient lighting. The 1,210 square foot area of Rookery Books, with six front windows, uses a mixture of natural and fluorescent light. Before the retrofits were installed, the store lighting consisted of eight foot fluorescent tubes hanging from the ceiling. The new fixtures, shown in Figure 2, were installed by the Redwood Coast Energy Authority.

Current funding given to the RCEA comes from the Pacific Gas and Electric Company and the US Department of Energy (RCEA, 2009).[3] The RCEA uses some of their funding to promote local business and resident reduction of energy usage. Rookery Books is one of many local businesses that underwent retrofitting by changing outdated light fixtures.

The retrofits were completed by the RCEA on October 2, 2007. The new fluorescent fixtures are smaller than the previous lighting fixtures. There are now twice as many lights in Rookery Books but less overall energy consumption. There are nine light fixtures, which contain two pairs of four foot fluorescent tubes, which equates to 36 fluorescent lights in total. The new fluorescent lights have been running for two years and the store owner has not had to replace any tubes, even though the lights are on six days a week, approximately 300 days a year.


Rookery Books is currently not considering other retrofits to improve the energy efficiency of the business.

Rookery Books' environmental impacts have decreased through lowered energy consumption. Reductions in energy also affect CO2 emissions, shown in Table 1, because power plants that create electrical energy release large quantities of CO2 into the atmosphere.
The year before the retrofits, Rookery Books had an average monthly electrical bill of $107.42. The years following the retrofits the store had an average bill of $87.70 per month as shown in Figure 3. The stores savings averaged $19.64 per month throughout the entire year after the retrofits. Energy data from before and after the retrofits is modeled in Figure 3. The annual savings was $235.72 and energy usage was reduced by 1,555 kWh per year. Table 2 compares the RCEA predictions of annual savings for Rookery Books with the measured predictions. The RCEA predicted a $358.11 savings by reducing 2,142 kWh per year, and estimated that the initial investment would take 2.8 years to payback. Using the average reduction found in the monthly billing statements it should take 4.2 years for Rookery Books to payback their initial investment. 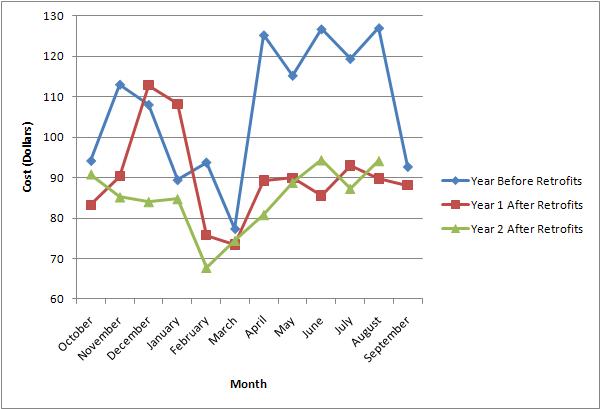 The business owner, Tom Clapp, called the retrofits a "sound business decision." Rookery Books would not have had the retrofitting done without help from RCEA. Clapp commented that using less energy has a positive impact on the health of the environment. Clapp called his RCEA representatives "very professional," and said that the representatives worked hard and accomplished the retrofit efficiently. He made special mention that the installation of the fixtures went smoothly and coincided with the business hours of Rookery Books.

Page data
Retrieved from "https://www.appropedia.org/w/index.php?title=RCEA_energy_audit_reviews/Rookery_Books&oldid=632037"
Cookies help us deliver our services. By using our services, you agree to our use of cookies.
Categories:
Maintenance categories:
Comments
Privacy policy · About Appropedia · Disclaimers · Mobile view · Content is available under CC-BY-SA-4.0 unless otherwise noted.
</html