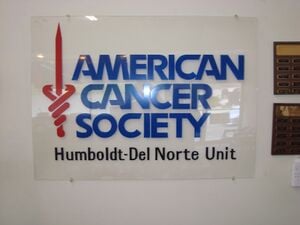 Retrofits Made at the American Cancer Society[edit | edit source]

In June of 2008, Redwood Coast Energy Authority came to the office and upgraded the 1950's incandescent lighting system with 64, five foot long, one inch diameter, 58 watt, florescent tubes as pictured in Figure 1. The reason why the office decided to make the retrofits came from both an environmental and economical standpoint. Because the American Cancer Society is a non-profit organization, RCEA helped them receive state grants which paid for the entire costs of the retrofit which was installed by Kneaper Electric of Eureka, California.

The employees from the American Cancer Society of Humboldt County are satisfied with the retrofit, their favorite part of the retrofit is that the new florescent lights are brighter and don't hum or flicker.[3] The only drawback is the entire lighting system can only be turned on and off by the circuit box in Figure 2. But the workers are not bothered by this and are overall pleased with the retrofit. 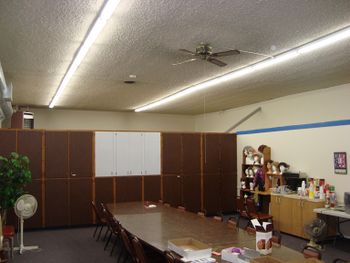 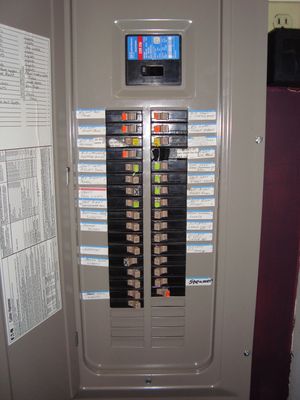 By adding up the all the KWh for the 20 months before June, 2008 (date of retrofit) and then dividing by 20, the average monthly energy use can be calculated, the same process can be used to find the average monthly energy use for the 15 months after the retrofit. The average energy use before the retrofit was 6,092 KWh per month, after the retrofit the average energy use was 3,803 KWh per month, a 2,289 KWh per month savings, and a 37% energy reduction. The retrofit saves an average of $381 dollars a month, and $4,572 dollars per year (Calculations based on average cost of $0.166 per kWh). The installation cost was $7,695 which was paid for by grants, if the American Cancer Society would have had to pay for the installation it would have took 1.6 years for the energy savings to pay for the installation. This means the American Cancer Society Humboldt-Del Norte unit on average saves 27,468 KWh and 13.73 standard tons (27,460 lbs.) of Carbon Dioxide per year (assuming one pound of CO2 per KWh). RCEA estimated the retrofit would save $2,544 per year and reduce the energy use by 15,260 KWh per year, so the retrofit was about 44% more effective than initially estimated.

Figure 4 shows electric use for the 15 months before the retrofit (blue bars), and the 15 months after the retrofit (green bars). As the graph shows the energy retrofit decreased electric consumption. The electric use varies greatly because on some months the American Cancer Society has large donation events such as the Relay for Life and the organizers spend more time in the office. 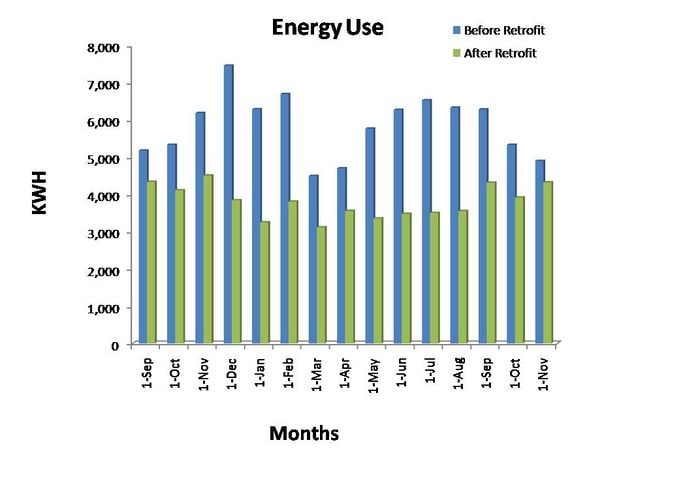