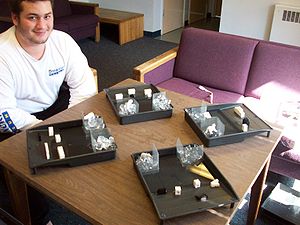 Our most successful solution according to the assigned criteria ended up being "The Seas of Change". This solution involved ice melting in a water container and overflowing a model town just next to the original sea level. As the ice melts in the warmed water the level would rise and destroy/flood the model town along the shoreline created. This idea has been combined with our Polar Bear idea. This solution consisted of a model polar bear drowning in a sea as the ice cube he stands upon melts in the warmed water. Both solutions have warm water as well as ice cubes so the combination of the two solutions was a relatively easy one.

The model has four trays so that more students may be involved in the project. A rotating heat lamp in the middle will represent the sun and provide some heat for the four trays surrounding it. Each tray will have trapped sections of crushed ice in the corners representing the globe's polar ice caps along with a model town along an elevated shore. In addition a polar bear will be sitting on top of one of the ice caps in each tray. Warm water will be poured into each tray up to the shore level to represent normal sea levels. As the warm water melts the ice caps the water level will rise. This will result in the polar bear being submersed in the water as well as the coastal town being flooded. The design will metaphorically yet accurately represent several of the damaging effects of global warming, including rising seas, animal migration habits being altered, and warming sea waters.

Materials and construction costs for the Seas of Change were not big factors in the project. The project's budget must have been kept under $325, which was met successfully, depicted in Table 2.

The team's estimated work in hours for this project is depicted in Figure 2. As of May 5, the total time spend by the Three Mengineers on the Seas of Change is 195 hours. This computes to a little over 65 hours per member.