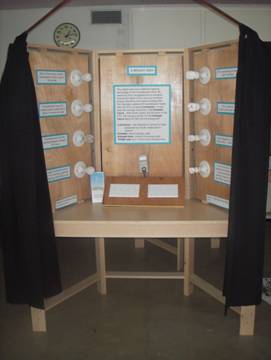 The objective of our design project is to create an interactive, educational display model that demonstrates the importance of energy conservation. The model will be displayed by the Redwood Coast Energy Authority (RCEA) who set forth criteria for the project.

The team presents their project.

A Bright Idea is designed to withstand daily use by customers of the RCEA. We estimate that the incandescent bulbs will need to be changed once every five years and the CFL's will need to be changed once every ten years. These times estimates were taken from the average life of the bulbs. Maintenance cost should not exceed $20 per year for parts replacement and general cleaning applications.

A Bright Idea is designed to show users the benefits by switching from incandescent light bulbs to CFL's. It is a simple, concise design made for the user to experience and manipulate. The user should turn on a single incandescent bulb of their choice and read the respective power use on the wattmeter that is centrally located on the display. Next, the incandescent should be turned off and the lumen equivalent CFL turned on. The user can see the significantly lower power use of the CFL compared to the incandescent. As each light bulb is illuminated, so is an information caption next to the light. These captions present single facts about energy efficient lighting and its importance. Using the power and energy information provided in the display, users can figure out how much of their home energy use is consumed by lighting, and how much could be saved.

The prototype constructed fulfilled the original concepts of the display. Figure 1 shows the finished project as presented to the RCEA. A Bright Idea worked just as expected. The incandescent row of lights is on the leftmost panel and the CFL row of lights is on the rightmost panel as seen in Figure 1. The main switchboard has 2 panels of 4 switches to the respected row of bulbs. Each switch lights up each light and there were minimal problems during assembly. During prototype testing, it occurred to the group that the lights were relatively bright considering they are at eye level and less than three feet away from the users face. Know Watts Up Designs accommodated this problem by writing small warning signs which warned the user of the bright lights before turned on. To be considerate to the area surrounding A Bright Idea and inside the rest of the RCEA building, Know Watts Up Designs constructed a shower-type of curtain around the display to minimize ambient light outside of the display.

Overall, Know Watts Up Designs is satisfied with the complete prototype of A Bright Idea. The time constraint was extremely limiting during construction and the group is happy to have completed the project within the limited amount of time. After presenting the project to the client, faculty, and fellow students, Know Watts Up Designs received some extremely beneficial feedback regarding slight modifications and improvements to A Bright Idea.

Know Watts Up Designs will implement some of these changes and continue to assist the RCEA with the maintenance of the display. Hopefully the RCEA will modify the display to further fit their needs and meet the demands of new criterion as they arise. Know Watts Up Designs is very proud of A Bright Idea, we hope it will inspire the audience use CFL's and therefore increase energy efficiency.