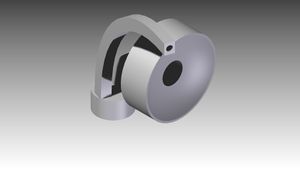 Printable Breast Pump A rendered image from a CAD program. I hope to have a real prototype in the near future! 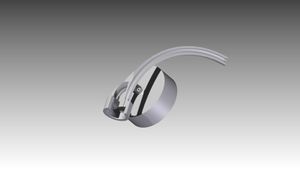 A mother's milk is considered the best food for infants. Not only is it considered the best source of nutrition, but it also gives the child immunity to many infections through the mother's antibodies, passed through the milk. A breast pump can be used to help the mother express milk which can be stored and fed at a later time, allowing the mother the freedom to leave her child in the care of another while still ensuring that the child is fed breast milk. Milk can be stored, unrefrigerated, for up to 8 hours. It can also be frozen for 6 months in a freezer and for 3 days in a fridge.[1] Breast pumps are a quicker and more efficient method of gathering milk when compared to manual expression, where the mother massages the milk from her breast.[2]

Breast pumps can be used to increase the supply of milk from the breast, and also to drain the breast to prevent clogged milk ducts, or uncomfortable swollen breasts.

Breastfeeding can lead to transmission of HIV from an infected mother to an uninfected child (See Breast Milk HIV Shield). However, expressed breast milk can be pasteurized[3][4] by heating it. This effectively kills the virus, eliminating the possibility of transmission to the child. The alternative is to use formula, which is not only a less desirably source of nutrition, but must be made very carefully in order to prevent contamination with bacteria, which could cause the child to become sick.

The Printable Breast Pump is a very simple, inexpensive breast pump that can be manufactured using a 3d printer. It is operated using oral suction from the lactating mother. A nipple shield is pressed over the breast, and is connected to a bottle. The current design accepts a standard "Coke Bottle". However, the design can be easily modified to accept any bottle. A glass bottle with a screw top is preferable, because it will not collapse under suction (which makes an annoying crinkly noise) and because it can be easily sterilized with hot water, or by being left in bright sunlight. The suction in the bottle is produced by the mother sucking through a tube. The mother never comes into contact with the milk. The mother must provide a gentle "pulse" of suction once every few seconds.[5] With practice, a user can breathe through the nose while still providing the suction, making the entire endeavour quite painless.

This is for anybody who wants to try it, and has a 3D printer available. I encourage you to modify it, and update this page with what you have found. Aspects of this design must be changed to suit the breast of the mother in question, so feel free!

The Printable Breast Pump is a work in progress. I hope it will be made simpler and better as 3D printing technology advances. Be careful to properly clean the Breast Pump; it could harbour bacteria in the steps left by the printer. Wash it with sterilized water after each use, and let it dry completely in the open air. If possible, sterilize it in boiling water! I do not make any guarantees about the safety or efficacy of the pump and will not be held responsible if anything bad, at all, happens when using it.

If you want to make and use the Printable Breast Pump: