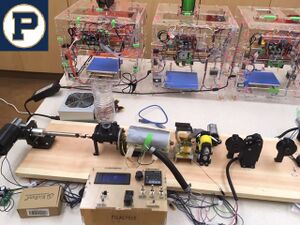 One of the biggest hurdles in developing nations is locating locally sources and affordable parts and expendables, including filament for use at tech labs in rural Africa. To solve this problem, Principia students created a preliminary design and developed a filament extruder that could use recycled plastic bottles (ubiquitous in the waste stream even in rural developing towns) to manufacture usable filament. 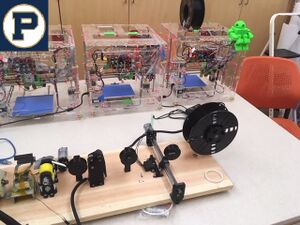 The overall goal of the project was to create an affordable and effective filament extruder that could process recycled plastic bottles that could be used in third-world countries. This overall would promote sustainability while creating accessible manufacturing for those that need it. Another feature of this goal was improving the usage recycle waste PETG plastics that abound in every remote corner of the globe, by transforming it into usable 3D printing filament which can then be used locally to produce sustainable solutions to issues local communities in food production, health services, and other areas.

"Filacycle" as it was known by the design team was based off of the RepRapable Recyclebot as well as several other open source filament extruder designs. The overall design was created by researching all of the existing open source filament extruders, constructing a matrix of advantages, disadvantages, local sourcing of parts, total cost for parts, then combining them with original designs from the team. The existing design we drew most heavily upon was the RepRapable Recyclebot. A Hall Effect sensor for precise measurement of filament diameter with its built in feedback system for fine QC on the accurate and consistent diameter of the extruded filament. The project team developed a recycled bottle shredder and completed training on the CAM machining software necessary for using Principia's new CNC mill to machine parts for the extruder and shredder assemblies. Key improvements to the design include: 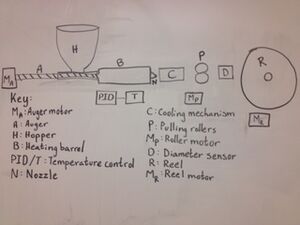 A whiteboard layout of the Principia 2019 Filament Extruder

While these aspects were not completed, improvements in the following areas began implementation:

Elements that were improved upon include the method of cooling the filament quickly just after extrusion and the Hall Effect sensor for precise measurement of filament diameter with its built-in feedback system for fine QC on the accurate and consistent diameter of the extruded filament.

The overall goal of this project was to design a filament extruder that can effectively measure and heat a filament mixture of recycled and purchased plastic pellets. In this task, Principia College finds the improvement on other open-source designs to be successful. Future improvements of the design would focus on improving the consistency and reliability of the design to allow for less monitoring.