A major goal of Potawot is to be sustainable. This includes natural storm water treatment and responsible resource management. Potawot uses swales as a part of the treatment system to manage and treat runoff.

Specifically, Potawot uses bioswales, which include vegetation. Bioswales decrease the speed of water flow, provide a containment area for runoff, and encourage suspended solids to settle out of the water. The plants in a bioswale filter pollutants and contain and decompose them in the soil. [1]

The swales are one part of the larger natural water treatment system at Potawot. The swales treat the runoff by filtering out pollution. Once the water passes through the swales, it empties into the treatment pond.

The swales are one aspect of Potawot’s commitment to sustainable resource usage. Instead of allowing runoff to become a waste, Potawot has a method to utilize runoff to assist another of Potawot's main goals: to preserve the natural habitat. The swales create an ideal area for native plant growth. [2] 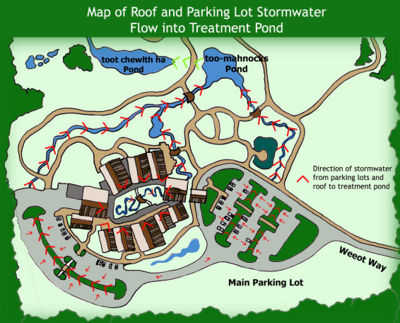 Figure 1: Diagram of Potawot's waterflow. Notice the swales in the parking lots. Image is courtesy of Eric Johnson.

The swales are positioned at the Potawot grounds to collect excess runoff from the parking lots. Designed to use gravity to transport the water, they are connected to each other by culverts and form a system to channel runoff into the treatment pond.

The swales are located near Potawot’s parking lots. In Figure 1, they are represented by the green areas within the parking lots. They are placed there because non-soil surfaces such as concrete generate large amounts of runoff. Water is unable to penetrate these materials and percolate into the ground during rains.[2] Percolation is the movement of a liquid, in this case storm water, through porous materials, such as the soil of the bottom of the swales.

As part of Potawot's storm water treatment system, the swales are designed to maximize the natural treatment of the water. Like all bioswales, the swales have a fairly low grade, in order to slow the water as it travels. This encourages water to collect for extended periods of time, because the longer the water remains, the more percolates into the ground. Much of the water travels in the subsurface, or below the top layer of soil. The soil used swales is permeable, which means fluids easily pass through it, and contains high levels of organic materials. [3] This promotes the filtering of sediments and pollutants such as metals from the storm water [4].

The water levels in the swales are designed to be shallow. They are 1-2 inches deep during an average rainfall and 5-6 inches deep at maximum capacity.

Native plants and shrubs are deliberately planted and encouraged to grow in the swales.

These plants assist the filtering process by breaking down pollutants and help collect the water in the ground through their roots. Some of these plants have rhizomes, which are underground stems that grow roots and shoots. Additionally, the plants support the larger aim of Potawot to encourage native habitat renewal. [2]

The species of plants chosen to grow in the swales are:

The swales require a mild amount of upkeep to remain functional. This consists of ensuring flow by manually unclogging the culverts and maintaining the grade of the swales. Nonnative, invasive, and dead plants are removed to allow the native plants to grow. Soil is replaced if it has worn away. [2]

As of 2013 the Potawat swales have been a success in diverting storm water and recreating a wetland habitat. Issues have occurred however because of too much biomass buildup in some parts preventing water to flow downward to the ponds in times of a storm surge. Swales are very permeable making them attractive around pavement, they allow a reduction in urban runoff and prevent flooding often associated with storm surges.

Map of freshwater wetlands and swales around Potawot.

As of 2014 the Potawat swales have continued to be successful in diverting storm water and recreating a wetland habitat. However the issues of biomass buildup still persist in parts of the swales, during a rainy day water flow downward to the ponds can be slow. Overall, the swales seemed to function well while it was raining on the day of the update, preventing flooding and reducing runoff.

The swales surrounding the village has been redirecting the rainwater/excess runoff water as intended. However, like many overly moist forest, the swales continue to become new homes to invasive plant species. This has been an ongoing issue for the swales located around the village. The land management team has been combating these invasive species manually. However, due to declining team members, the invasive plants have been a little more rampant than usual. 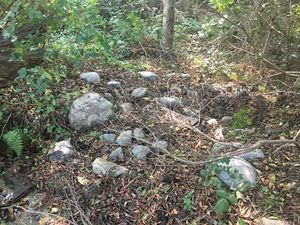 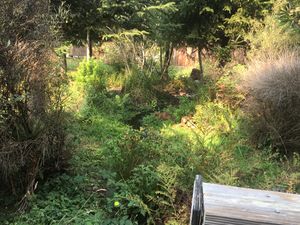 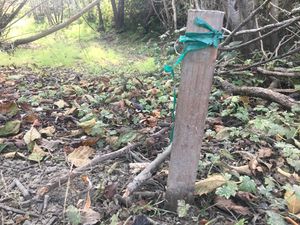 stake by a swale

We were able to tour the grounds, and learn about the history of UIHS. We also discussed the condition of the biomass swales. History: Doors Opened in 2000 Site chosen to address overflow of clients from other health service sites. Our guide informed us of the founding elders setting the standards for any and all conservation projects; including the creation of a home for all members. The main site serves as a place for tribal peoples, and the Ku’wah-dah-wilth ( Wiyot for “Bring It Back to Life”) goals within community wellness; and conservation. With the educational and restoration modeling came the planting of native species, and culturally appropriate plants.

Biomass Swale Update: Vegetation included in the swale are chosen to help absorb pollutants, slow down water flow, and contain water runoff. Design includes dolomite ground cover, vegetation, and 16’ culvert pipes. Our guide mentioned the capacity of the swales as we walked past a marker in case of a “150 Year Storm” impact. _Native Plants, Maintenance, and Harvesting: -Small-fruited Bulrush -Red-twig Dogwood -Juncus -Tuft Hairgrass -Red Alder -Vine Maple Willow -Slough Sedge (Source of plant information from prior update.) Most sections of the swale are managed while other sections are left alone due to a small managing crew. Tule grows along and within the swales which is used for basket weaving. The Arroyo Willows are filling certain sections which impacts the growth of tule.

Page data
Retrieved from "https://www.appropedia.org/w/index.php?title=Potawot_swales&oldid=621780"
Cookies help us deliver our services. By using our services, you agree to our use of cookies.
Categories:
Maintenance categories:
Comments
Privacy policy · About Appropedia · Disclaimers · Mobile view · Content is available under CC-BY-SA-4.0 unless otherwise noted.
</html