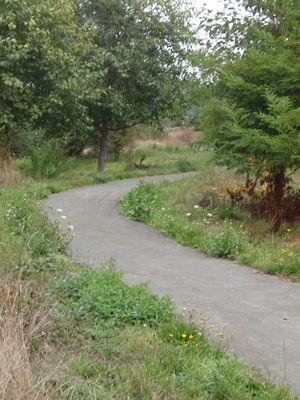 Potawot Health Village is located on 40 acres of land in Arcata, CA. Approximately one and a half miles of paths have been constructed for community enjoyment of the conservation land that surrounds the main facility. Instead of applying conventional asphalt to create walkways, Potawot chose to implement pine resin pavement in order to ease potential impact on the land. Eric Johnson of Potawot said they chose the material because it "is semi-impervious and is not composed of... petroleum (fossil fuel) based contaminate[s] [that will] runoff into our wetlands harming invertebrates and other organisms and groundwater."

The pine resin paths at Potowat, as shown in Figure. 1, are composed of a combination of regular aggregate, or crushed rock, sealed together with pine resin and pitch from pine trees (Product Review, 1999).

This natural alternative to asphalt isn't mixed and poured hot as regular asphalt is, but instead mixed together through a cold process. Water and the pine emulsion are mixed and then laid where it is needed. The mixture is then compacted and set using conventional methods, such as steamrollers in larger areas. Installation in Potawot was done by hiring a local construction company, "Hooven and Co. who then subcontracted with Mercer Frasier to lay the pavement"(Eric, 2008). Instead of the product setting by cooling, it sets through evaporation of water leaving the mixture (Product Review, 1999).

Much of the energy required to lay normal asphalt is avoided because the mixture does not have to be heated up, saving fossil fuel resources. Also, because the adhesive material is made of tree resin rather than normal petroleum based asphalt, the pavement doesn't contain any volitile pertroleum based chemicals (Product Review 1999). The final product is similar in appearance to asphalt in texture and thickness but can vary in color. The pine resin is transparent and takes the color of the aggregate. 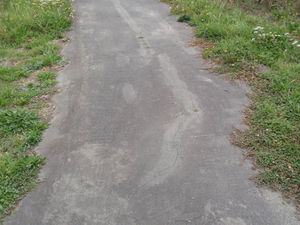 The strength of pine resin pavement varies due to the quality of application, site location and actual pine resin product used. NaturalPave XL, a pine resin distributor uses the Marshall Stability Test to quantify product quality. This test heats up the pavement to 140 F and then observes how the pavement responds when a heavy weight is applied. NaturalPAVE XL withstanded "8,000 to 18,000 pounds" (NaturalPAVE XL, 2008). Typical Marshall Stability results for conventional asphalt are generally 4,000 to 6,000 pounds.

Other studies have claimed that resin pavement has three times the compressive strength (Product Review, 1999). yet there are still issues with any pavement you place on unstable soil. The Potawot paths are constructed on unstable wetland soil which as you can see in Fig. 2 have produced slight cracks in the pavement that had to be fixed.

Asphalt is the most conventional pavement material in our current society and may be cheaper and easier in the short run. Asphalt paving costs $1-5/ sq. foot including installation (Costhelper.com). Many asphalt paving companies exist and it is convienant to schedule a project.

Asphalt may be cost effective in the short term but it also has negative externalities associated with it as well. Since it is a hot mix, it takes energy from fossil fuels to heat it up. Once it is heated it emits harmful air pollutants into the air, such as formaldehyde (EPA, 2003). Asphalt is a impervious material, meaning it does not let water filter through. This diverts rainwater directly into storm drains which lead to runoff of petrochemicals from the pavement to bodies of water, polluting water as well.

Pine resin pavement is an appropriate alternative for asphalt. Pine resin also has benifits and shortcomings and they are listed in the table below.

The pine resin pavement has held up well, it is very impressive and durable. There are some cracks and vegetation growing through the walkway, along with a few small sink holes and one big one. Overall, the pavement is like that of other materials, it does it's job well but can get rundown.

Much of the remaining pine resin paths are still functional and easily accessible as a result of routine maintenance. Some previous cracks were repaired in the past and currently remain intact. Cement was used to replace one section of the trail. A couple new potholes were observed and large amounts of invasive grass vegetation was found breaching a stretch of the pathway adjacent to gardening area's fence line. To prepare damaged areas, a saltwater mixture is applied during Summer as a soil-friendly herbicide, along with manual weed removal. Holes and cracks are then refilled with an Eco-friendly glue similar to trail materials. During our brief interview, it was mentioned that the saltwater herbicide technique is not as successful as hoped for. One major issue mentioned by staff was that the trail becomes very slippery during Winter/ wet seasons. This hazard, along with routine upkeep, etc. has called for reassessment of the trail's materials. Possible future replacement is being planned with different Eco materials.

Since October 2017 other sections of the trail have been replaced by traditional pavement. In certain parts of the remaining trail, cracks, splits, grass, pot holes and dips that are a few inches deep have taken over. The outer edges of the old pavement are crumbling, jagged, fragile and falling apart. Despite some of the trail being in bad shape, other parts of the trail look to be doing great. The portions that seem to be doing great are free of grass sprouting from the middle of the pavement and seem to be the portions closest to where the old pavement meet the new pavement. While speaking to Alme from Potawot community center mentioned that the issues with the pine resin pavement are from the unstable soil.

Page data
Retrieved from "https://www.appropedia.org/w/index.php?title=Potawot_pine_resin_pavement&oldid=647617"
Cookies help us deliver our services. By using our services, you agree to our use of cookies.
Category:
About Appropedia · Policies · Contact · Content is available under CC-BY-SA-4.0 unless otherwise noted.