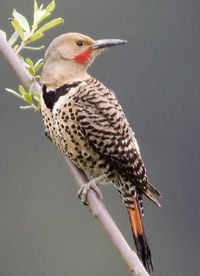 In an attempt to replenish wildlife populations that have been dissolving do to human development, the United Indian Health Services' (UIHS) Potawot Health Village has put much effort into creating suitable habitats for many animal species. To do this, many topographical changes have been made to the land. Once mostly flat land, Potawot Health Village has been transformed into an area with various flat pastures, berms, islands, orchards, and wetlands. 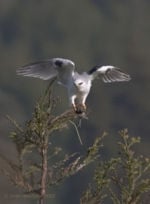 A Kite, a rapter that can be used as an indicator species to monitor the shrew population. Photo courtesy of Eric Johnson.

In an attempt to monitor the wildlife populations, the United Indian Health Services uses birds as indicator species. Indicator species are more easily monitored species who can, by their numbers, help us understand populations of other animals directly related to the indicator species. For example, by noticing increases in raptors, such as Kites, one can deduce that the population of shrews, an important prey of the raptor, must be increasing. Another example might be the increasing number of woodpeckers, such as the northern flicker, which indicates increasing health among insect populations. 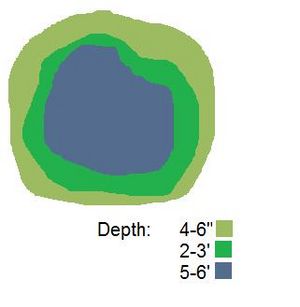 Figure 1. Ponds are deeper towards the middle, to allow for an area for waterfowl to land. Image created by Edward Kier.

The UIHS has put forth effort at Potawot to increase animal populations. Some of these efforts include creating environments that mimic the natural environments of wanted species, such as wetland, meadow, grassland, and upland environments. In the wetland environments, ponds are created with increasing depth towards the center of the pond (see FIG 1). This pond design allows for grasses to grow along the edges, water plants to grow along the more shallow water within the pond, and deeper water in the center too deep for plants to grow. The deeper water allows for water fowl to land in the middle.

Another example of wildlife restoration is the emplacement of six bat boxes on the premises. These bat boxes have seen frequent use, and are effective in restoration of local bat population. Also, the ponds within the grounds of Potawot have been populated with three spined stickleback, which have been effective in lowering mosquito populations. Also, woody debris has been put in place around the ponds. This habitat is ideal for longtail weasels, which have seen significant growth in numbers.

Restoration of various animal species has been successful over the years. There have been increased numbers in the populations of various small mammals such as longtail weasels, bats, gophers, skunks, foxes, and raccoons. Also, there have been various mountain lion sightings over the summer of 2008. Reptile and amphibians have been increasing in numbers as well, notably gardener snakes, red legged Pacific tree frogs, western toads, while undesirable amphibians such as bull frogs are seldom to none in number. Fish population at Potawot, such as the steel head trout, and the three spined stickleback, (which is indigenous to the area) have also flourished in numbers.

Some current concerns that UIHS are having are the rather large numbers of feral cats, as well as the large mosquito populations. While the mosquito problem is being addressed by the number of bats and three spined sticklebacks that inhabit the Health Village, feral cats seem to be a larger problem. To help address the problem of stray animals at Potawot, it is currently not recommended to bring pets onto the Health Village.