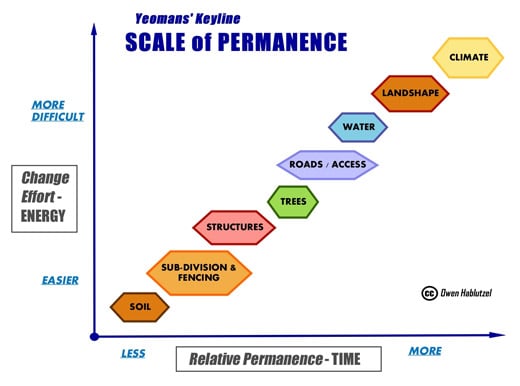 P.A. Yeomans developed what he called "The Keyline scale of the relative permanence of things agricultural, for the planning, development and management of agricultural lands."[1] The scale ranks several characteristics of a design site in decreasing order of how long they persist over time (and therefore the effort needed to modify them). The scale can be used by landscape designers to help analyze the site, and determine the most appropriate responses to prevailing conditions. The scale had a significant influence on the early development of permaculture, and is enjoying renewed interest among permaculture designers. Several prominent permaculture practitioners have made modifications to Yeomans' original scale.

Bill Mollison modified the scale by separating microclimate from macroclimate, and expanding "trees" to "plant systems"

David Jacke's version of the scale is probably the most commonly used at present. It follows Mollison's version, but with more additions and some reordering.

Darren Doherty modified Yeomans' scale slightly into what he calls the "Regen10" permanence scale. He rephrased and conceptually expanded a few of the points and added two points to the bottom of the scale. The order remains the same.

Regarding the additions, Doherty wrote, "9. PolyMarketing is never more impermanent, momentary and so incredibly accessible in this ‘iEra’, and 10. Energy is as fleeting as a photon of light and in human terms electricity generation has never been more accessible."[2]