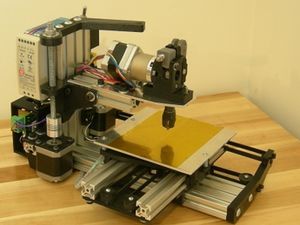 The plans to make this 3D printer are freely available for download.[1] 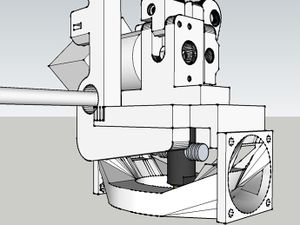 This is an "Extruder Base With Dual Fan Mount", and is also available for download.[2]

Peer-to-peer hardware is about designing physical objects and then distributing the information needed to make them.

This is done using the same Open Source[3] sharing and collaboration techniques which are used to create and distribute non-physical goods such as Wikipedia, Appropedia, or the Linux computer operating system.

The world's physical manufacturing and distribution networks were largely developed using 19th and 20th century pre-Internet technology. Raw Materials are extracted in large quantities at remote locations and shipped to factories where they are assembled and packaged. The finished goods are sent by container ships halfway around the world, and then loaded onto trains or trucks to be sent hundreds or thousands of miles to their final destination. 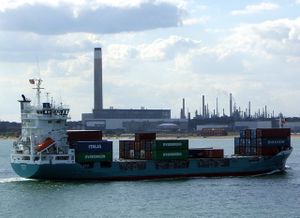 The current distribution system depends upon a global network of ships, trains, and trucks fueled by fossil fuels. In the long term, this system of remote manufacturing is not sustainable, because the fossil fuels needed to sustain it are running out[4]. Also, the actual carrying capacity of the planet itself will be further strained as large segments of the world's 9 billion people attempt to move up from subsistence farming and into the global middle class[5]. Shipping goods halfway around the world for anything above a fraction of the world population is simply not sustainable[6]. 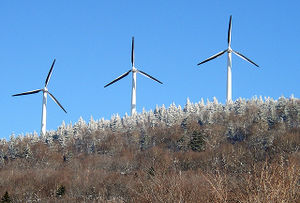 Manufacturing goods right where people live, using renewable energy and locally-available raw materials, would satisfy global demand without the need for a worldwide distribution network. The current price of goods includes markups and profit margins for each segment of the supply chain: raw materials, energy, manufacturing, packaging, transportation/distribution, and retailers. Eliminating the old distribution network would eliminate all of those costs, including the cost to the environment.

Other eliminated costs would include most of the costs associated with advertising and marketing, which are built into the final price of goods. If people manufactured goods locally for local use, then there would be no point in running national or global advertising campaigns to convince people to buy "Brand X". Most of the extra packaging could also be eliminated. Products wouldn't need to be boxed in layers of cardboard and styrofoam for a ten-mile trip[7].

Waste plastic, which comprises around 20% of the garbage in America's landfills[10], can be used as the raw material[11]. Small wind turbines, which can produce enough electricity to power a 3D fabricator, can themselves be made by feeding waste plastic through a 3D fabricator[12]. 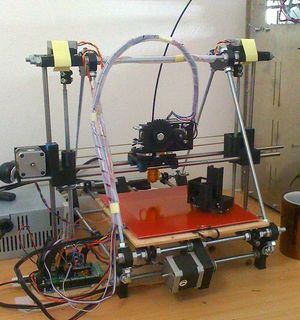 RepRap.org is a nonprofit which was founded in 2005 by Dr. Adrian Bowyer, a professor at the University of Bath. The group "is about making self-replicating machines, and making them freely available for the benefit of everyone"[13], and is organized as an Open Source community project[14].

RepRap currently has the plans for five variants of their 3D printer available for free download, including the Prusa Mendel pictured to the right[15].

Makerbot Industries is a New York for-profit company. It was co-founded by Zach Smith, who previously worked on the RepRap project. The company sells both easy-to-assemble and pre-assembled MakerBot Replicator™ 3D printers[16], which are based on Open Source designs.

The company also runs Thingiverse, where anyone can upload or download Open Source designs for printable objects.