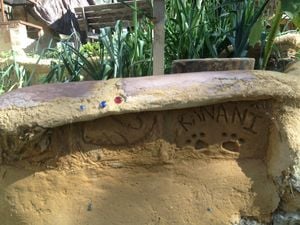 Using local materials such as clay, recycled paper, river sand and straw a series of test brick were made by the Green Building class at CCAT in the spring of 2013. There were multiple different percent combinations of these various materials used. Given that the final bricks where to construct a wall that would retain soil durability was the #1 desired trait in deciding the final brick composition. After they were given a week to dry is was established that too much sand and/or straw made the bricks crumble and that in the most climate of the Pacific north west,water used for mixing was going to want to be kept to a minimum in order for the brick to dry in a reasonable amount of time.

It was decided that the best combination to construct the bricks was 40% paper 30% clay and 30% sand. This mixture was then poured into the molds to dry.

The Adobe mortar was composed of mostly clay with, some manure for a binding agent and straw that served as the fiber to hold the mixture together along with a small amount of cement that was added in at the very end. This was done so that "dancing mixers" feet were not exposed to the cement for the majority of the mixing. The mixing was done by stomping on top of the clay and organic matter with bare feet. During which you would slowly shake out straw out of your hands. The mixing was done on a tarp that was frequently folded over on its self to help with the even combining of materials. If there were any bunches of straw they were pulled apart and mixed in to create as homogeneous of a motor as possible. The cement was also added in to give the wall an extended life span given that the bricks themselves will break down easily in the weather. That being said there was a chicken wire top that was placed on top of the bricks with some overhang to create an awning for the bricks and then the mortar was had rubbed into the wire frame.

The object of the project was to make a two teared terrace wall out of local, natural and affordable materials that could be completed by 7 students over the the cores of the 10 week class. The goal was to work with the slope of the land to make a gardening bed for the organic gardening class to grow vegetables in.

Below is a well detailed link to a project that constructed bricks in a similar way with some detailed pictures of the molding frames. However this design used smaller bricks then the ones used in this current design.