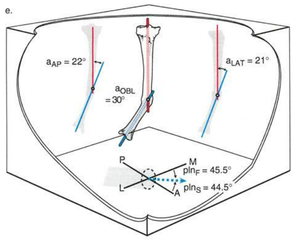 Angular deformity in long bones can occur in any plane. Deformities in which angulation is seen on both AP and LAT x-rays are actually uniapical or multiapical deformities in an oblique plane. They are also known as 'Oblique plane deformities' (Fig. 10a)

To plan an oblique plane deformity case, two important parameters are required. One is the 'angle of the oblique plane' itself w.r.t the AP and LAT direction. Second is the 'magnitude of angulation deformity' which the bone has in this oblique plane. Both these parameters can be calculated by a simple method called 'Graphical method' explained as follows. 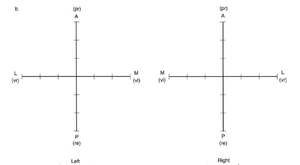 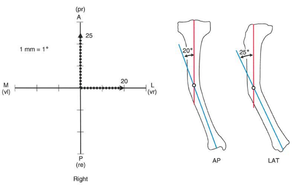 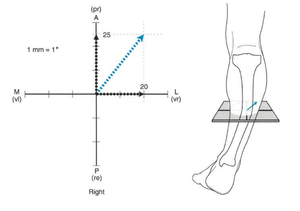 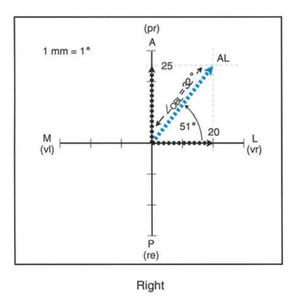 Fig. 10e
Measure the length of this newly drawn oblique line, then that value will become the 'magnitude of angulation' in the oblique plane. Measure the angle between the oblique line and the x-axis (lateral), then that value will become the 'oblique plane angle' from the front (AP) view (Fig. 10e). Now the deformity can be planned in this oblique plane like planning done in normal uniapical deformity in AP or LAT view. The 'magnitude of angulation' is the correction angle for osteotomy in this oblique plane.
Page data
Retrieved from "https://www.appropedia.org/w/index.php?title=Oblique_Plane_Deformity_-_Graphical_method&oldid=638073"
Cookies help us deliver our services. By using our services, you agree to our use of cookies.
Categories:
Comments
Privacy policy · About GSTC · Disclaimers · Mobile view · Content is available under CC-BY-SA-4.0 unless otherwise noted.