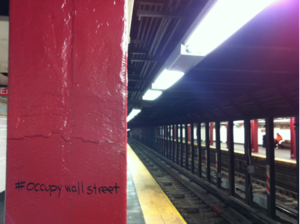 To write a word with a hashtag on the subway today is to create a cyborg communication: it is not (and does not need to be) a self-contained piece of counterculture propaganda, or even an exciting, subversive guerrilla marketing campaign. In isolation it says almost nothing – and does so quietly. This is fine; it doesn't need to advertise 'bigger'; there is not even imagery. Instead, it is a doorway into as huge and as complex a world as anyone might ever imagine venturing, offering a million conversations via open media technology, using that hashtag as a starting point.

So it creates a single beautiful hybrid object, the cyborg communicator, out of a bright red concrete pillar on a subway platform and every networked computer anywhere in the world. Already a large minority of us, perhaps even the majority of humans who'd take an underground train in Brooklyn in 2011, would know instinctively what the combination of hashtag and words means. In 2011 we all learned the new code.

I think it would be fascinating to uncover – or build – a data set to assess whether there is a direct connection between the great fundamental changes currently enveloping the world and our personal, individual ability to accelerate our own growth and change. It certainly feels as if the two are linked and feeding upon one another; although, obviously, that's just experience and guesswork. Hence the longing for data.

It seems to me that the radical acceleration of change in the world in the past year has not just informed and inspired, but is subconsciously triggering our individual will to shift in our seats, even within very co-opted, mainstream lives. This may not be comfortable right now, just as the global changes themselves are not; however, the results will be outstanding. And I propose that this is (although it is also beyond) an unplanned benefit of the tools and the language of open media. The same communication flows that it nurtured into massive social uprising and societal mood-shift in 2011 also nurture us individually to make similar stretches and leaps. I imagine an actual tangible shift in brainwave patterns, or something of the kind, enabling us to smash through walls we previously thought unbreakable.

From midway through the noughties until 2011, I mistakenly allowed myself to lean towards a kind of 'brushing over the bad bits' right-of-centre Libertarianism. It was tied in with how glamorous isolationism can be, and my inability to make phone calls. It was partly because I don't like people as much as I should, making it difficult to continually want for them to have a fair shot when they're so annoying. And it was partly the influence of my punk-folk singer friend Frank, who is a very smart, cogent debater, and who favours a classic right-wing, anti-State (pro-business) interpretation of the word 'freedom'. He went to LSE. Obviously, the prevailing wind of mainstream, post-Left-and-Right politics blows that way too: a socially progressive, yet fiscally neo-liberal norm, that disguises the gigantic decline-shaped hole by spreading the dirt around the place, dropping it bit-by-bit through a cunning device in the bottom of its trousers. It's that same centre-ground now staunchly occupied by the leadership of the three main parties in the UK, sometimes to the dismay of their own back benchers; where old, morally-regressive ideas are suppressed, yet we still bullishly disenfranchise and dehumanise those at the bottom, to justify not giving them their fair share.

Then in 2011, two things helped reboot my small-c 'communism'. The first was my Mum's gentle yet unwavering Quakerly Communism, itself only re-emergent in the past few years, as she lost her faith in God, enabling her to talk me down off the ledge.

The second was a new certainty about technological inevitability, born of repeated exposure to that unique cultural cyborg-ing effect of open media: in a global war for digital access and information control, if our digital identity cannot be protected, then neither can digital wealth. The future is with the hackers and the downloaders, not the Establishment trying to stop them. Ultimately, inevitably, as the arms race spirals and our digital identity becomes far more 'owned' by others – either because they stole it, or because they 'protect' it, 'in our interest', from those who might steal it – individuals get lost in the middle. Once again, we are civilians caught up in a vicious firefight.

In that kind of reality, and it's not even far off, our simple escape will be to make all the digital stuff unimportant. It will have to be. Already so much of the Internet works best of all as a tool to play with. The vast majority of the Internet is that, if you accept porn as play too. Therefore, what is perceived as 'important' will shift and, I believe, return to the purely physical; back in the place the geeks call 'meatspace'. Which will kill money too, now that's all digitised. Imagine, the entire concept of 'money', stuck delightfully on the wrong side of the aisle, switch on-and-off-able at will... How awesome! I know this is optimistic, but in such a scenario, all these fabulous lost good things tumble back into play: like-for-like exchange, real items with real value; personal gifts or exchanges of time and effort; the lived experience of community, replacing the codified, appropriated and devalued use of the word. The earth. Playing. All the stuff we really most love, but forget when we're stuck on a laptop, desperately wading through our non-existent accounts.

2011 became for me a year of taking back control and future-proofing my working life, in a number of ways. I learnt to speak to people about stuff, as well as singing at them. I've always talked a lot during shows, so now I can get booked to speak in public too and not screw it up. I replaced my decade-old terrible website with a robust, useful website, capable of selling my work and maintaining my flow of information. In a slightly pathetic, self-absorbed way, doing that took more courage and action than I'd had for the previous decade.

Most importantly of all, by a long way: for the first time in many years I seriously stopped compromising my creativity for fear of not making enough money. I truly stopped - and it was easy! This change in my creative life reminds me of the Allan Carr 'Stop Smoking' books; or, even better, of J.R. "Bob" Dobbs, figurehead of the Church of Subgenius, the old pseudo-/anti-religious icon from the late 20th century.

In accordance with Dobbs' teachings, of course, my switch of focus away from monetization just made me more money. I see in it an almost spiritual release, a tongue-in-cheek version of Karma to match the sheer silliness of Dobbs. I even made a bunch of cash out of photographs of toilets. Since January 2010, I have taken a photo of each loo I've visited (for whatever reason) and posted them online to Twitter. It was purely a fun thing. In spring 2011, kicking furniture around with unexpected confidence, I made an A3 card print of my 72 favourite loos and sold it via online mail-order, making around £11 profit per print. I sold 250 in six weeks.

Those of a strongly progressive or countercultural bent can be caught out when ideas we love are ushered into the mainstream, ideas that only three or four years ago seemed sexily outlandish, and were viewed from the centre as peripheral, if they were even noticed. This is the Nirvana syndrome: your favourite underground punk band scores a smash hit, and now everybody in the world loves them to death. What's the point of our special secret knowledge if, at some point, we have to hear it parroted by the idiots?

Well, as a touring musician, I spend a lot of time driving up and down the country, and I can tell you something that I noticed in 2011. For the first time, we could stop at a MOTO Service Station at noon on a Wednesday and be guaranteed that the televisions were screening Prime Minister's Questions, rather than some home-improvement reality show. Groups of people from across almost all walks of live, from all classes and cultures, would quieten down in Costa Coffee to watch our current state of affairs unfold live. This was not true in 2010, or 2004, or 1997.

In such moments, the challenge is to avoid 'I told you so', and the neglect of continued responsibility that goes with it. Time doesn't just stop. We are crossing borders, from being intransigent transients, to being acknowledged by every armchair current affairs buff as ahead of the curve. Yet the Establishment will do as it always does: it will appropriate – uncredited, where possible – water down, bend and fold into corrupted form, and present our ideas as its own 'solution'. And somehow, even as we write collaborative books about the paradigm shift, the outcome will be excuses and maintenance of the status quo. So 'I told you so' has shit-all practical value. And it doesn't make friends, either: we all hate someone who was right, especially when she is right about something terrible, Cassandra-style.

We already know this, sitting around our open fires, enjoying our thrift; playing a homemade board-game, smug in the knowledge that we were better prepared for this experience than most of the poor buggers around us. We already lowered our expectations.

2012 has two directions that it could go: either the Establishment will succeed in taking back initiative with a transparently, defiantly graceless, assertive, violent methodology. Or, when it tries, it will come up against far tougher countercultural opposition than we have seen up to now. As I type this, I see from Twitter that Anonymous has taken down the US Government website, in protest at draconian changes to tighten up web controls for copyright reasons. A skirmish that they will win, for now.

We, the people, forced back to our pure physicality, as the only trustworthy iconography of who we are, not to mention the only way to obtain food, will perhaps look on wryly amused, with far less at stake. 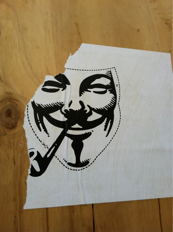 An icon you can trust

Iconography gets mixed up in the most creative, inspiring way, these days. I hadn't thought about Bob Dobbs for probably a decade. Then, late in 2011, I saw this fly-poster stuck up around Brighton. It is a simple mash-up of the Anonymous logo, itself taken from Alan Moore's revolution-themed comic book V For Vendetta, and the classic, smiling, pipe-smoking Dobbs face. Here, then, is a future brought into view by the fulcrum of 2011: the direct connection of movements fighting to break down Establishment walls with the individual's ability to unplug from those same Establishments. At which point, it doesn't matter so much when they fail, because each time they still woke more of us up.

In September 2001, in the burning World Trade Center, firefighters broke through internal walls to rescue people trapped in offices. They broke through just with their elbows, putting through cardboard-thin, illusory barriers that the office workers themselves could have broken through at any moment. The workers were fooled by the veneer: so used to presuming the walls were 'real' that, even in a moment of life-and-death emergency, they did not consider attempting to break out.