Natural Sequence Farming (NSF) is a technique used in rural areas landscape that help restore natural water cycles that allow the land to develop despite drought conditions. NSF offers a low-cost, widely used method of minimizing drought extremes and making productivity higher on Australia’s farms and landscapes. This technique is based on ecological principles, low input requirements and natural cycling of water and nutrients to make the land more nourished. Peter Andrews has devoted his life to the development of Natural Sequence Farming (NSF) techniques to restore the natural balance of water cycles prevalent before they were disturbed. His method has been in use in a number of locations and shows no sign of failure, but it does test the traditionalists who argue that Andrew's use of weeds and willows to trap water go against all agricultural advice. [1]

While many soils have lost their settlement profile, their functions that provide the nutrients for the ground can be restored. NSF systems can help improve the soil outlie and availability of organic material concluding in increased plant production without increased water usage.

The important elements of NSF in improving soils are[2]:

These NSF testings have resulted in increased bacterial productions helping to provide essential nutrients in a ready to use form. NSF can do what mineral fertilizers cannot do - produce a functional soil rather than just a hydroponic support medium. A diversity of plants is encouraged by NSF succession approaches using grazing, slashing and mulching to produce a resilient system with essential elements. As surface soils are often prone to leaching, NSF advocates deep-rooted plants to stabilize them while accessing and recycling trace elements to support later successions of palatable grasses. For soils and plants, the role of NSF structures in generating flow form patterns in streams can be as important as reducing the velocity of flows. Certain patterns can help produce new soils through the deposition of sands, clays and organic matter on the floodplain while protecting the lush vegetation already there.

In many regions of Australia, floodplains are disconnected from creeks and rivers and natural flow regimes. This leaves them unable to store water to support productive farming and the growth of riparian vegetation. Many of today’s floodplains are incised with deeply scoured gullies and gorges. These are channels that expedite the swift flowing removal of much of the land’s fertility and the carriage of increasing amounts of salt. The soil and its nutrients are highly susceptible to leaching and erosion owing to the application of inappropriate agricultural and pastoral practices creating depleted soils and vegetation cover.

Under NSF, cropping is best suited to methods complementary to retaining significant areas of season-specific perennial pastures. If needed, cultivation may be confined to soils on valley slopes rather than floodplains but it can be worth exploring direct-drill minimum-till broadcast methods first. Horticulture can be sited off flood plain areas, with careful transfer of valley floor fertility and water within the NSF system. NSF harmonises well with organic approaches to producing premium farm produce for a growing domestic and export market. Increasing numbers of consumers and vendors are demanding products produced with environmentally sustainable systems coupled with farm accreditation and certified produce before acceptance. The use of outside inputs or recycling farm produce on the property can be part of managed fertility transfer, both on the farm and in the sub-catchment. For instance, hay making of legume-rich pasture can be rotated around various areas of a property to work in with weed reduction needs and fertility management. Irrigation is best-sited on valley floors although most areas managed with NSF require minimum supplementation of water transfers already naturally occurring on and beneath the floodplain. 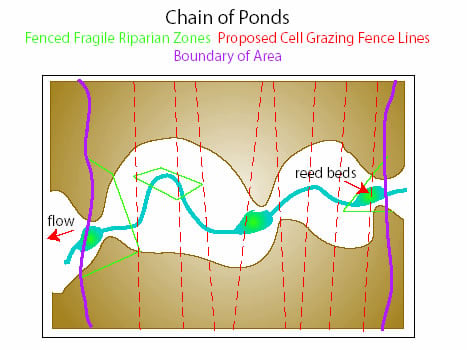 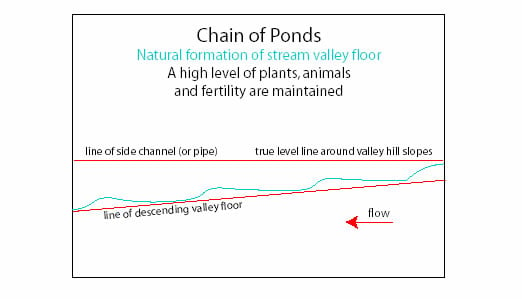 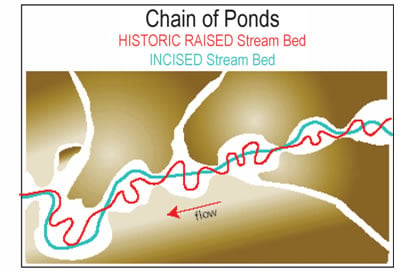 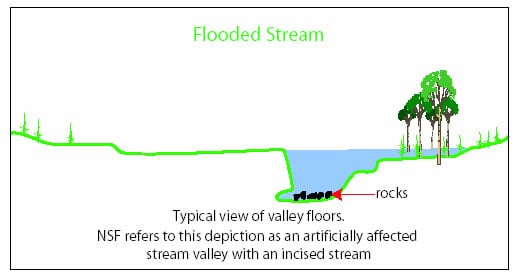 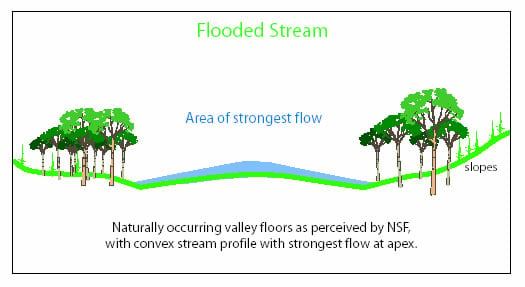 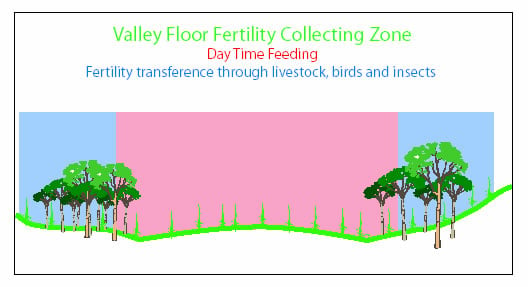 Owing to its base of natural processes, NSF is claimed to achieve more sustainable outcomes than traditional pipe and pump irrigation systems as it does not incur large financial costs or create long-term environmental degradation, loss of biodiversity and increasing salinity, as often occurs catchments with highly regulated stream regimes. NSF employs few imported or manufactured inputs such as pesticides, herbicides and artificial fertilisers. In terms of financial capital and operating inputs, it is not an expensive system to introduce and it brings Greenhouse gas benefits through increasing carbon levels in the landscape. The investment required is in training for the landholder to interpret the natural processes of the landscape and time spent by the farmer in ‘reading the country’ and applying the NSF principles to the particular property and landscape features of their region. It is no surprise to find that Peter Andrews grew up on a property near Broken Hill area and spent much time with his stockman father and members of the Aboriginal community learning to read country.

Local flooding of the floodplain of water catchments was more common. This resulted in water and nutrient-rich sediments being spread over surrounding soil, hydrating the soil and supplying plant nutrients. The freshwater “lens” around the waterway was re-hydrated. These in turn refills the aquifers connected to the waterway. This freshwater lens has the effect of sitting above any saline groundwater. [3]

In most catchments we have unwittingly depleted the ability of the Australian environment to conserve water and resist drought. Many of our land uses are reversing natural processes and increasing salinity. The loss of wetlands has been especially critical in this loss of resilience. Most of these natural filters and fertility distributors have disappeared through clearing, filling and draining. Extensive clearing of natural vegetation and the erosion of soils have accelerated the destruction of the fertile chain-of-ponds system that dominated many landscapes. [4]

Australian Peter Andrews has developed a method of farming dry and exhausted land, and has promoted it for the last 30 years.

Answer: Mr Andrews in a Sworn Testimony to the Standing Committee on Natural Resource Management.(Government of NSW.) said, "Yes, it is a bureaucratic battle because, you see, you have a whole series of people making a hell of a lot of money out of the problems." Full Report of Procedings

Page data
Retrieved from "https://www.appropedia.org/w/index.php?title=Natural_Sequence_Farming&oldid=600990"
Cookies help us deliver our services. By using our services, you agree to our use of cookies.
Categories:
Maintenance categories:
Comments
Privacy policy · About Appropedia · Disclaimers · Mobile view · Content is available under CC-BY-SA-4.0 unless otherwise noted.
</html