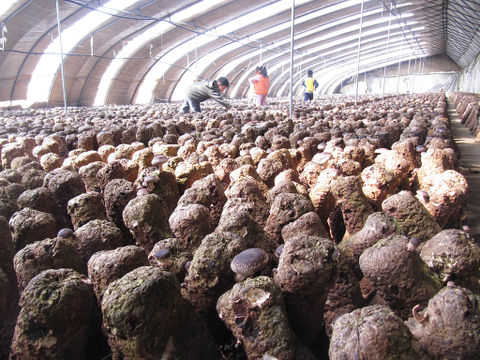 Mushroom Farm in China in a solar greenhouse, "curtains" down.

Several types of edible mushroom species are available. Unlike what you may assume, all have rather similar environmental needs, namely:

When using wooden logs, make sure you take wooden logs of about 5-15cm, the logs need to come from recently chopped trees (chopped in winter/resting period), about 5 to 15 cm in diameter. The best results are attained with Betula, Fagus and Quercus. You'll need to drill holes and then introduce brood plugs (inoculated wooden plugs).[1][2]

As mentioned above, typically any type of mushroom can be grown anywhere on the planet using method 2 (not when growing outdoors, ie on logs !), as long as the temperature and humidity is controlled. Still, using native species in your location might have its benefits, as some species might favor a slightly higher/lower temperature, are better able to cope with temperature fluctuations, ...

Species that should be grown on wooden logs or sawdust:

Species that should be grown on manure, compost, straw, or combination of any of these:

Inoculation refers to the process of introducing either spores or mycelium culture to a spawn substrate. When using manure, compost or straw, it is advisable to sterilise the substrate before inoculation to ensure that no other (inedible) species of mushroom take root. When using wooden logs, sterilization is off course not possible. ZERI at Namibia University is studying ways to do this with firewood and drums. [3]

Incubation is the time after inoculation and before the mycelium has fully colonized the substrate. Since mushroom has not yet consolidated its hold on the substrate and is, therefor, more susceptible to contamination. It should be noted that the method using logs takes considerable more time to incubate (6 to 12 months), the other method uses but a few weeks.

After a substrate is fully colonized it can be fruited. Though the fruit bodies of the mushroom are commonly considered to be mushroom itself, they are only the reproductive organ of the greater organism. In most climates, it is common to build a fruiting chamber in order to provide the correct fruiting conditions for the colonized substrate mycelium to bear fruit bodies. These fruiting conditions often include light, fresh air, proper humidity, and space for mushrooms to grow.

A project in Ghana working with mushroom farmers from the USA is using Shiitake mushrooms (Lentinus edodes)[4]. They claim that these are suitable because:

Any of the mushrooms will have converted the woody waste into a material that can be digested in a biodigester or fed to livestock. Conversion of this type is important to sustainable agriculture. Waste wood, tough crop stalks and rice hulls and other lignified materials are not easy to place back in the natural energy and nutrient cycles. However, by cultivating edible oyster mushrooms, a valuable food is produced. Any that are not wanted or not suitable for human food can feed livestock or produce biogas in biodigesters.

Mushroom compost (sometimes also called 'spent mushroom compost') is a by-product of mushroom cultivation and is often considered to have beneficial properties when added to soil[5].