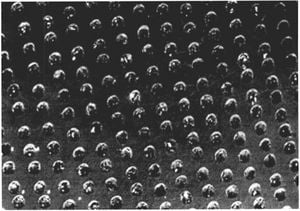 Laser surface texturing (LST) is a surface engineering process used to improve tribologicalW characteristics of materials. Using a laserW to create patterned microstructuresW on the surface of the materials can improve load capacity, wear rates, lubrication lifetime, and reduce friction coefficients. The use of surface irregularities to improve tribological properties was first discussed in the 1960's and is implemented in several manufacturing techniques.[1] While surface texture engineering has been studied for many years, the use of laser patterned surface microstructures for tribological improvements emerged in the 1990's and continues to undergo significant technological advancements. Lasers offer unparallel control of the surface microstructure and a low environmental impact compared to other surface etching processes.[2] Given that frictionW creates unavoidable losses and wear in countless processes and devices, the opportunities for improving efficiency and lifespan with LST technologies are extensive. As well, LST offers possibilities to overcome stictionW, for example in microelectromechanical systemsW.[3] 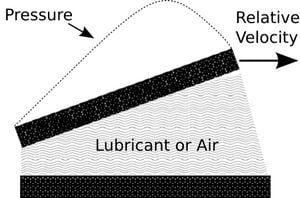 Each microcavity, whether it is a groove or dimple, acts as a miniature hydrodynamicW bearing during relative motion between the two contact surfaces.[1]This hydrodynamic effect is a result of the pressure gradient that forms in each pore, which can be modelled using the Reynold's averaged Navier-Stokes equationW.[5]With the relative motion between the two contact surfaces and the shear forces acting on the lubricant at the surfaces, a pressure profile is created due to the wedge effect (Figure 2). Microhydrodynamic bearings reduce the friction and wear between sliding surfaces. Lubrication is necessary for the microhydrodynamic bearing effect to become influential, as air has a very low viscosity relative to liquid lubricants. Non-lubricated surfaces required high relative speeds for this bearing effect to become relevant.

If an area of surface contact loses lubrication, the microcavities can provide additional lubricant that is drawn to the starved area through capillary actionW.[4]The patterned geometry allows for countless miniature lubricant reservoirs, providing direct and immediate lubricant relief for starved areas. In order for these reservoirs to exist, the geometries of the pattern microstructure must be closed to prevent lubricant from being forced out through channels.[6]

The creation of specific patterned surface microstructures can be achieved in many ways, for example abrasive blasting, reactive-ion etchingW, and ultrasonicW machining. However, laser technology offers the most control and precision over the produced geometry. Also, laser ablation does not use chemical reagents or produce significant waste. See the section below for alternative surface texturing methods.

To implement laser surface texturing, several technological decisions regarding the equipment and application need to be considered. These include the laser characteristics, the use of scanning or interference patterns, pore geometry and frequency, and full versus partial LST.

In order to manufacture pattern surface microstructures, the laser used needs to be suitable for the workpiece material and capable of either melting or ablating the material. In practice, some of the main types of lasers utilized in LST are Nd: YAG laserW, carbon dioxide laserW, and excimerW lasers. The lasers are usually pulsed, often using a Q-switching setupW, to produce one dimple per pulse. With high repetition rates (pulse durations of μs to fs), thousands of dimples can be created in very short processing times. With possible speeds of well over 1000 microcavities produced per second, LST can be scaled to large areas.[6]

Nd: YAG and CO2 are more common than excimer lasers, as excimer lasers have comparatively low ablation rates and take excessive time for LST. On the other hand, due to the low abolition of excimer lasers, they can be used to create microstructures within micrometer precision. As well, excimer lasers are often used with lithography methods and etching procedures to create surface textures.

In laser machining, the material is removed either through ablation, melting, or a combination of both. Often, a high-pressure gas is introduced next to the laser focal point, which blasts away molten and sublimated material. Cutting and removal rates depend on the laser power, wavelength, pulse duration, and on the material properties of the workpiece; characteristics such as absorption, thermal conductivity, and thermal capacity. The hardness of the material does not affect its laser cutting rate, making LST effective on typically difficult substances like carbides and ceramics.

In order to produce the patterned microstructures on the material's surface, the laser beam position relative to the surface has to be manipulated. There are three main techniques for controlling the laser ablation to create the desired patterns: Direct beam movement, scanning, and the use of interference patterns. The technique to be used depends on the workpiece geometry, the scale of production, and the budget.

Another method of controlling the laser patterning is to utilize a scanning system. By reflecting the laser beam with a series of motorized mirrors, the laser beam can be quickly moved to the desired position for each microcavity to be created. These motorized mirrors, usually referred to as a mirror galvanometerW, can precisely and rapidly direct the laser beam to the desired contact point. To ensure the beam does not strike the surface on an angle, a flat field lens is utilized to ensure the beam and surface are perpendicular at the contact point.[6]

To create patterned grooves and crossed grooves, optical interferenceW patterns can also be used.[2]The interference pattern covers the size of the beam diameter and creates many microcavities at once. When two beams interfere with each other, constructive and destructive interference occur, creating parallel linear lines of light. If this pattern of laser light is directed at a material's surface for a given time, ablation and melting will occur, creating parallel linear grooves. The period of the linear grooves is given by the formula:

Where: λ is the laser wavelength, α is the angle between the laser beams.[2]

To create a crossed groove microstructure, a sample can be exposed in one orientation to create linear grooves, and then rotated 90° and exposed again to the light to create crossed grooves.

The optimum patterning and geometry of micropores for the best tribological characteristics depend on several application factors and is not an exact science. With dimple-like depressions, it is found that the exact geometry is not significant compared to the ratio between pore diameter and depth, and the area fraction covered by pores.[1]The application factors that influence the optimum pore ratio and area fraction include: 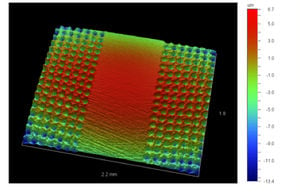 Figure 3. A 3D optical profilometer scan of the face of a piston ring treated with partial laser surface texturing.

In general, the current studies report optimum pore area coverage of between 10% and 15%.[7], [8] As well, the optimum pore diameter in the general case is around 10 μm.[8]At larger pore diameters, the lubrication film clearance drops and a sharp rise in friction is found.

In certain high pressure applications, LST is found to be most effective when only partial areas ofthe contact surface are textured.[9] By only texturing a partial area, the load capacity between the surfaces can be much higher.[9]An image of an engine piston ring with partial LST is shown in Figure 3.

Laser surface texturing relies on the target material being melted, ablated, and blown away by high pressured gas. After LST has been applied to a surface, excess melt rims and slag are present on the surface as an artifact from the laser processing.[4]These melt rims and excess resolidified material need to be removed through polishing in order for the intended surface geometry to function as expected. This polishing can be done with gentle abrasives and standard mechanical polishing techniques.

Page data
Retrieved from "https://www.appropedia.org/w/index.php?title=Laser_surface_texturing/zh&oldid=670691"
Cookies help us deliver our services. By using our services, you agree to our use of cookies.
Category:
About Appropedia · Policies · Contact · Content is available under CC-BY-SA-4.0 unless otherwise noted.