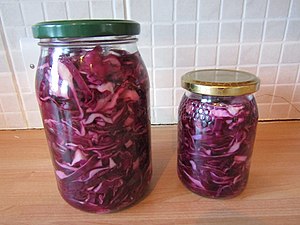 Jars of pickled red cabbage prepared in a household within the town of Cromer, Norfolk, England.

Lacto-fermentation, or Lactic Acid Fermentation, is a method of food preservation using lactic-acid-producing bacteria. The bacteria feed on the starches and sugars in food and produce lactic acid, which naturally inhibits putrefying bacteria.

Lacto-fermented foods have been used by civilizations around the world for thousands of years. Not only does the process preserve foods, it also supplies "friendly" Lactobacillus bacteria to the digestive system, and is claimed to improve digestibility and increase vitamin content of the foods that are preserved. While lacto-fermentation is a popular method among health-conscious cooks, its practicality for food preservation applications is being widely recognized again after years of neglect. The process does not produce the same uniform results as commercially-prepared "pickling," so many foods that once were widely lacto-fermented in the home have been abandoned in favor of their industrially-produced counterparts (e.g. pickles, sauerkraut). 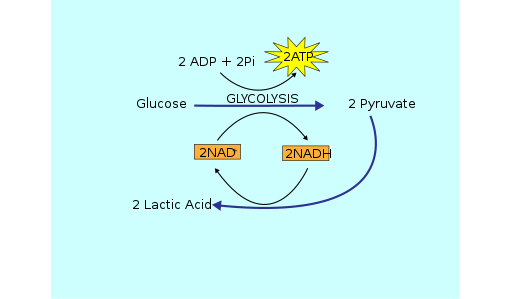 The average home kitchen can use lacto-fermentation to preserve fruits, vegetables, or dairy products without specialized equipment or freezing. Most lacto-fermentation recipes require mashing or pounding of the fruit or vegetable to release the juices. Then, salt or whey are added to prevent spoilage while the lactic acid producing bacteria become established. The mixture is kept in an air-tight container, first at room temperature while the fermentation occurs, and later in a cool dark place for longer-term storage.