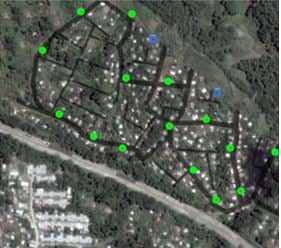 Engineers Without Borders USA (EWB-USA) is a non-profit organization seeking to "build a better world through engineering projects that empower communities to meet their basic human needs and equip leaders to solve the world's most pressing challenges." Since it´s initiation in 2004, the Michigan Tech Chapter (EWB-MTU) of EWB-USA has held projects in Honduras, Bolivia, Guatemala, and Panama, and has received multiple chapter awards from EWB-USA for it´s work in those countries. EWB-MTU has current teams working in Guatemala and Panama with work developing for an additional domestic project team.

The Panama team of EWB-MTU is working with the community of La Esperanza to design an adequate water distribution system that will supply potable water to households of the recently formed community. The team has been working closely with community leaders, Footprint Possibilities (NGO), IDAAN (the Panama district municipal water supplier), and government officials to complete a design and secure necessary supplies.

In August of 2016 a group of six traveled to Panama for the first project assessment trip. The purpose of this trip was to gain a better understanding of the problems within La Esperanza and view the current partially functioning distribution system in order to assess the need for a project. The EWB-MTU team met with community leaders as well as all available residents. A large goal of the first assessment was to collect census data about the community and establish a working relationship with the community members. The census data was largely used to estimate population. It should be noted that the census data was incomplete because many residents weren't home, so for further calculations the average household size (4.02 people) was used for all unknown values. Panama national population growth data was used to estimate the 10-year growth rate to be approximately 13%. The census data collected can be seen in Table 1.

Using the geografic software ArcGIS along with compatible cell phones, the travel team recorded the census data, each home location, and a photo of every home within the community. Multiple community meetings were held in order to boost awareness of the project and form the relationship between the MTU team and the members of La Esperanza. Meetings were also held with the City Planner assigned to La Esperanza and the Vice Governor of the Provence of Panamá which includes Panama City and it´s surroundings. Seeing that La Esperanza is located just outside of Panama City and in a Panama Canal no-build zone, the MTU team realized after this first trip that government involvement and coordination would be crucial for project success. From these meetings a relationship was formed with the Governor´s Office, City Planning maps for La Esperanza were secured, and an understanding of the current land title situation between the governement and the members of La Esperanza was gained.

In early January 2017 a second assessment trip was held following up on the first by gathering additional important data for the design process and continuing with community/government relations. The Vice Governor visited the community during this trip to see the situation and show his support. The two main purposes for this trip were to collect elevation data for the community and to formalize an agreement between IDAAN, Footprint Possibilities, La Esparanza, and EWB-MTU. A meeting was held with IDAAN to discuss the project scope and needs including the need for an additional main water line to be run to the community entrance. The elevation data collected was used to model flow in the water distribution system. The team also used this trip to decide on final main tank locations at high points within the community. The tank locations needed to be at a high point while also being accessible for IDAAN water trucks to fill during dry seasons and/or before the new main water line is finished. 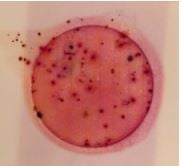 A community meeting was held in order to update the community on project progress as well as inform the members of La Esperanza of the future need of construction hands during the design implementation period. A water committee made up of community members was also formed to manage the coming distribution system. Petrifilm tests seen in Figure 1 were taken at the current distribution system leak points and tap points as well as at community wells used for cleaning by residents. The existing wells within the community tested positive for coliforms thus making the option of wells as a water source even less desirable. No tests were done for heavy metals, but it is suspected that the ground water is further contaminated by the dump across the highway from La Esparanza.

After the first assessment trip the EWB-MTU Panama team used the ArcGIS data collected to create a general map of the community of La Esperanza which can be seen in Figure 2. The map shows the home locations (pink), points of interest including possible tank locations (green), and the main roadways of the community (red).

Using the data from the census, population density maps were also generated. Two versions of the maps were made. One version was based on the number of occupants in each house, and the other was simply based on the house locations. Both versions yielded similar results for areas of peak population density which are mapped in red in Figure 3. The scattered peak locations were used as a basis for selecting tap stand locations throughout La Esparanza. Once these points had been selected, approximate tap stand usage for each tap was estimated based on the population distribution.

As can be seen in Figure 4, the proposed water distribution system has tap stands scattered throughout the community along the roadsides (in green). The locations mapped are not set, and exact locations will be selected on site. The system will have large storage tanks (in blue) at the two marked locations. These locations were selected based on accessibility, distance from population centers, and elevation. The roads on this map are proposed roads from the government planning office.

Lastly, after collecting topographical data during the second assessment trip, a 3-dimensional map of the community was made. To facilitate easier analysis for the network design all the coordinates collected were converted to feet from an arbitrary point in the southeast corner of La Esparanza. Using this data set a mesh function was fitted to the data to generate a 3-dimensional map of the community. The accuracy of this model is best near the roads where the data points were taken, and since the network will primarily run along the sides of the roads the elevations of all points within the network can be estimated using this model. This terrain map can be seen in Figure 5.

One major consideration in the design process has been what type of storage tanks to use. Some of the options have included plastic and steel tanks that could simply be purchased and installed. Another option was to construct a block and concrete tank. The concrete options demand significant labor and time but at a fraction of the cost of the plastic tanks. A government representative has offered to sponsor the tanks, but the final decision will depend on cost.

Because of the current status of the land titles, pipes cannot be run directly to the houses. Alternatively, tap stands will be used as method of distribution. These stands will be installed strategically throughout the community to best serve the population.

Much of the design work has been dedicated to modeling the water flow in the proposed system to make sure the system will work. The team used EPANET software to simulate water usage across the system and to estimate and regulate pressures based on usage time patterns given by Footprint Possibilities. A functional system has been modeled, and an objective of the third assessment trip is to present this design to IDAAN, Footprint Possibilities, and the La Esperanza community members.

Engineers Without Borders as a worldwide organization holds the sustainability of its projects at a high level of importance. In order to ensure that the new distribution system being implemented with La Esperanza is maintained and benefits the community for future generations, the EWB-MTU chapter will continue to support the community in this specific project for a minimum of five years. This includes encouraging the presence of a continued Water Committee made up of community members, education on the new system and it's upkeep, and investigation into future projects based on community need. The ultimate goal of the project is to leave the community of La Esperanza as the owners and knowledgeable caretakers of the new water distribution system.

A third assessment trip is currently scheduled for August of 2017. A small team of two will present IDAAN with the current design developed by the EBW-MTU Panama Team during the Spring 2017 semester. A working approved design will encourage IDAAN in completing the needed main water line installation and will move the EWB-MTU Panama team toward final design approval and construction. A tentative first implimentation trip for the construction of the finalized design is set for the Summer of 2018.

EWB-MTU will continue to work with the community of La Esperanza over the course of the coming years to finish the construction of the water distribution system design and educate the residents on it's maintenance. Future projects with La Esperanza may include bridge design for safer access to La Esperanza from a neighboring community, as well as the hook up of individual homes to the water distribution system once land titles are secured and the government plans for development are underway.

Page data
Retrieved from "https://www.appropedia.org/w/index.php?title=La_Esperanza,_Panamá_-_Water_Distribution_System&oldid=619681"
Cookies help us deliver our services. By using our services, you agree to our use of cookies.
Categories:
About Appropedia · Policies · Contact · Content is available under CC-BY-SA-4.0 unless otherwise noted.