From Appropedia
Redirected from LED FAQ 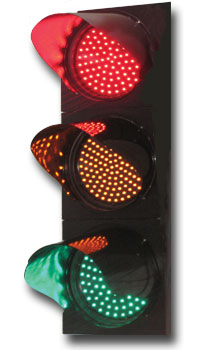 What does an LED traffic light look like?[edit | edit source]

An LED traffic light looks very similar to a regular traffic light. It still gets the job done and is actually brighter. An LED is actually very small and therefore the traffic light is made up of a bunch of smaller lights, this is apparent when you look closely. The color of the light depends on the exact composition inside the bulb. A link to pictures is posted below. [1]

Who Invented the LED?[edit | edit source]

It all began when Oleg Vladimirovich created the first LED in 1927. There was no practical use for it until 1962 when it was discovered that the infrared LED could be changed into a visible red LED. [2]

How does an LED work?[edit | edit source]

What is a diode?[edit | edit source]

A diode is a component that restricts the directional flow of charge carriers. Also a diode allows an electric current to flow in one direction, but blocks it in the opposite direction. [5] Here is a link to view a picture of a few types of Diodes.[6]

What is a p/n junction?[edit | edit source]

A p/n junction is the connection between two semiconductor types, p-type and n-type. The p/n junctions are said to have fixed characteristics. [7]

In a LED light, the term "solid state" refers to the route of conduction through the bulb. There are no gases, filaments, or moving parts in a LED. Instead, the electricity is passed between metal or alloy gaps ("solid state"). This solid state conduction of electricity requires less energy to create the desired light and in turn produces less lost energy via emitted heat.

What are the common elements that make up an LED?[edit | edit source]

The common elements that make up an LED is gallium arsenide which is used in making the substrates. Gallium arsenide is a compund made of arsenic and gallium. Silicon and germanium are also used to make the diodes. Some commercial LED manufacturers use substrates made out of sapphire as well. This is a mineral made of the elements, Aluminum and Oxygen. [8]

How are LEDs made?[edit | edit source]

Producing an LED starts with a substrate. The substrate is sapphire for InGaN LEDs or gallium arsenide for AlInGaP LEDs. Layers of various materials are then grown on the substrate. These layers are applied under precise pressure and temperature control, and make up the "N layer" or active region and the "P layer". This process is called epitaxial or epi-growth. The brightness, color and intensity of the resulting LED are determined by the quality and consistency of this epigrowth process. After the epigrowth process individual LED chips are defined on the wafer. The wafer is then sawn up in to separate individual LEDs whose exact color and electrical characteristics are then recorded. Finally, the LED is installed in the LED package where wire bonds create the electrical connections. To complete the package, a lens is attached to direct light and silicon is added to protect the chip and fill the air gap between the chip and lens. Each LED is then tested and organized according to color, brightness, and other characteristics. [9]

How efficient is an LED compared to a CFL or an incandescent bulb?[edit | edit source]

What are the wattages of a normal incandescent light compared to an LED?[edit | edit source]

Current generation 3W Led's have the light output of a 20W Halogen spot. It is expected that at the end of 2007 there are LED's are on the market with a brightness comparable to a 50W Halogen spot.

How long do LED bulbs last? (e.g. what is the estimated lifetime of an LED?)[edit | edit source]

How many incandescent bulbs (and light bulb changes) do you need to last as long as a single LED?[edit | edit source]

How do you replace a normal incandescent street light with LEDs?[edit | edit source]

It is all in the design when it comes to replacing the normal incandescent with LED's. Even though LED lights are small as individuals, they shine brightly and work very efficiently. LED's come in "bulbs" which have the same compatible base as an incandescent bulb. When they replace them, they go up, take off the colored panel, pull the old incandescent light bulb out and replace it with the array of LEDs. The new street lights will last for years and save money by lower maintenance. [10]

What colors are LEDs available in commercially?[edit | edit source]

Who manufacturers LEDs for use in traffic lights?[edit | edit source]

About half the cities in PA have done it -- in addition:

Do LEDs save money?[edit | edit source]

What are the major variables in determining savings?[edit | edit source]

The true savings from LEDs are found not only in the amount of money saved on electricity, but also money saved on labor and the cost of replacement over time. Labor and replacement cost is substantial when you are looking at a large building with many lights. If you use LEDs, maintenance costs will be much less than if you used traditional incandescent bulbs. The other major variable in savings is the amount of power used compared to the power used for an incandescent bulb. LEDs use only 10-20% of the electricity used by incandescent bulbs. As you can see, LEDs save much more money and energy in the long run. [17]

How much money is saved over the lifetime for switching out a red light with an LED?[edit | edit source]

Denver switched 20,500 traffic signals to LEDs which saves them $430,000 annually. This also saved criteria pollutant emission and 1440MTCE in annual emissions savings. 'The LED signals have a payback period of less than four years and the total cost savings of over the lifetime of the fixtures is estimated to be over $6.1 million. [18]

What is the payback time and return on investment for red LEDs?[edit | edit source]

The payback time for the red led is 3 years. The return on the investment is $290 over the red LEDS life time.[20]

How much money is saved over the lifetime for switching out a yellow light with an LED?[edit | edit source]

Yellow Color Traffic Lamp LEDs, each individual light replaced will save between $31 and $62 over its lifetime — which will be three to four years for ordinary use.[21]

What is the payback time and return on investment for yellow LEDs?[edit | edit source]

I read that for a three light traffic signal to be converted to LED it costs about $250. Whereas, the traditional incandescents cost only $150. Your initial investment is almost double per light, and remember that most intersections have four of the three light fixtures. The article also stated that traditional bulbs cost about $73 per signal, per year. Adding up the four signals this is almost $300! Saw that you use a 20watt LED. That draws one fifth of the power, which means it should be about $60 each year. Now granted only 1/12 of the lights at the given intersection are yellow so you divide the $60 by the 12 lights you get $5 for LEDs as opposed to $25 for traditional bulbs. Finally take into consideration that the yellow light is the shortest light, which should give it the longest life span, thereby, saving you money by not replacing it as often. The difference in initial cost for the two type is about $40, for just the yellows, and at $5 per year, they should return their investment cost in just two years. Which is right about the time you would replace the traditional bulbs. After two years, let the savings begin.

How much money is saved over the lifetime for switching out a green light with an LED?[edit | edit source]

There is about $40,000 dollars saved per year when green traffic lights are switched to LED lights. That is for the total of 762 lights so that would make it about $53 [22]

What is the payback time and return on investment green LEDs?[edit | edit source]

How much money is saved over the lifetime for switching out a walk/do not walk sign with an LED?[edit | edit source]

What is the payback time and return on investment for white man LEDs?[edit | edit source]

The payback time or return on investments for white LEDs is given at several different levels. "As usage increases further reaching benefits build and accelerate payback in the savings associated with bulb replacement, infrastructure and safety." At home level payback energy savings consumes 20%-50% the power of incandescent depending on the deployment and light levels. [23]

What is the payback time and return on investment for red hand LEDs?[edit | edit source]

How much money does it cost to make the switch (labor + materials)?[edit | edit source]

LEDs and the Environment[edit | edit source]

If the street lights are running on coal-fired electricity - how much carbon dioxide emissions are prevented by switching to LEDs?[edit | edit source]

In the case of a number of small communities in Arkansas -- 1,329 LED traffic signals and 706 LED arrow signals to be installed in 40 to 45 communities that have one to five traffic signals. For the net life cycle of LED lights, air pollution is reduced by 41 million pounds of carbon dioxide, which is the equivalent of removing 3,599 cars from the road per year. [25]

How much pollution is prevented switching an average intersection to LEDs?[edit | edit source]

Any other questions[edit | edit source]

Are there any problems with not melting snow?[edit | edit source]

Some (cold) states are stating that the LED lights do not burn hot enough to melt snow, which can create a hazardous situation as the lights become obscured by the snow. A smart heater might need to be implemented to prevent this. [26]

Is there any other reason not to switch to LEDs?[edit | edit source]

A few reasons why people may not want to change to LED's may be because LED's are currently more expensive per bulb right now, even though people will save money in the long run, the initial price to start seeing the savings may turn people away. LED's must be supplied with correct current, this can most often require a person to buying regulated power supplies, which they may decide against. LED's are not able to be used in an object that requires a sharp direct beam of light. LED lights may not be the best options in every circumstance or situation. For example, LED lights are not suitable in very high temperature areas because the light will overheat the bulb, and result in light failure.

Cheap plastic lenses are available that can produce a sharp direct beam of light from a standard high power LED. This brings the half intensity angle from about 120° to 10° or less.