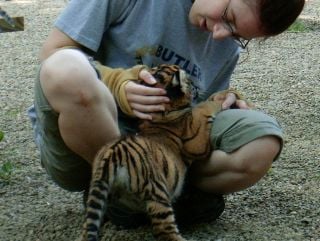 Who I Am[edit | edit source]

Hey hey! My name is Kelly and I'm a junior at Clarion University. I'm majoring in Enviornmental Biology and I hope to work and research animals with my degree. I'm from Butler, PA and am a generally pleasent person to get along with. I enjoy music, surfing, going to concerts, hiking, climbing, swimming, traveling, reading, and a bunch of other things. I'm a pretty easy going person and enjoy life as much as I can.

My Dad is a well traveled man being a pilot. The one thing I've learned most from him is to be a traveler and not a tourist. I've seen a lot of North America and my favorite place of all time is Canada. When I was younger, I went to a boyscout camp and got the opportunity to learn new things, but most importantly, learn alot of about the environment. The biggest lesson I learned there was LNT or Leave No Trace. If everyone who has ever camped followed LNT, our forests would be alot cleaner. The most amazing experience of my life so far was my travels to Belize, one of the more unknown countries of Central America. As an eco-tourist, we camped on the beaches of half moon caye while also helping the island by removing rooted coconuts from the ground to stop overpopulation of the trees. My all time favorite place that we visited and helped out at was Cockscomb Wildlife Sanctuary and Jaguar Preserve. For anyone that appreciates the life of the rainforest, this place was a paradise of sorts. We stayed in wooden dorm-like houses and used composting toilets. The cold showers were a bit much, but it was all worth it! Our project was to then rebuild the wooden bridges around the trails because they had rotten away from the rainfall. It was a ton of hard work, but it helped save the society money to spend on equiptment for tracking jaguars and keeping them safe. I would recommend travelling out of the country at least once in your lifetime. You wont regret it!

The one and most important reason that brings me here is the understanding and appreciation for the enviornment. I'm here to learn how physics plays a major role in how the enviornment functions and how it may eventually lead to its saving. The one interest that I've always had about the enviornment was the power of solar energy. Not only is it the basis of life among plants and animals, but also how its role in today's society has grown and how technology has brought it to a new and innovating level. What better way to make the best of what we got?

I'm a good listener but this I'm quiet. On campus, I'm vice president of FMLA (Feminist Majority Leadership Alliance), Involved in the BIOs club, and the Wildlife Society. I really like organizing things like bakesales, and fundraisers. I was involved with the Relay for Life as a committee chair for donations and advertising.

Who Killed The Electrical Car?