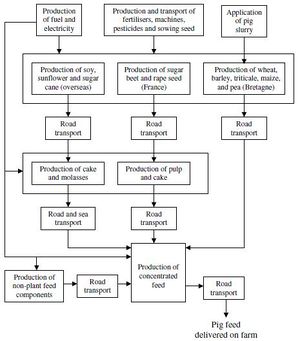 Life Cycle Assessment (LCA) in agriculture can identify areas of current practices that require improvement, such as water resource management, energy use, land use, or greenhouse gas emission. These factors contribute to global warming potential (GWP), soil acidification, and eutrophication. The various environmental impacts related to large-scale livestock production are dependent on the types of farming practices. The types of feed, housing, equipment, and waste management are all factors that contribute to the overall impact associated with livestock production. This page is a review of LCA literature on the subject of livestock production, more specifically, the impacts associated with raising and harvesting pigs.

Feed ingredients are often grown and imported from outside the farmlands used for pig production, which means that the transportation of certain ingredients also may have potentially significant impacts as well. This section focuses on the contents of pig feed, the required energy for production, and the potential impacts associated with production.

Pig feed was composed of both animal and crop based ingredients prior to the 2000 banning of animal meal and fat in pig feed. Current pig feed is now composed mostly of crop-based proteins and fats. These crop based ingredients include: wheat, barley, corn, beets, cassava, soy, and sunflower. According to a 1998 study of global cereal, oilseed and tuber production, 40% of these products were used for animal feed production.[2] Figure 1 is a flowchart that describes the process of pig feed production. Table 1 contains information on the amounts of some materials used for feeding pigs at different stages of production.

There are numerous ingredients used in pig feed, and each of these ingredients has its own energy and resource requirements. The crop based ingredients require fertilizers, pesticides, farm equipment, and fuel. Fertilizing agents include: ammonium nitrate, potassium chloride, and calcium oxide. Waste produced by pig production can be used as fertilizer for production of crops for pig feed. Pesticides and diesel are other inputs required for crop production. Pesticides protect crops from harmful insects, while farm machinery requires fuel for operation. Table 2 compares the inputs, yields, and nitrate emissions of several crops: three that use pig waste as fertilizer and three that do not. Certain ingredients, such as amino acids, are chemically synthesized, rather than produced naturally. The energy requirements for these ingredients are much higher than those grown naturally. Table 3 compares the impacts associated with producing some of the ingredients named in Tables 1 and 2. Energy use in Table 3 refers to energy generated via crude oil, natural gas, uranium, coal, or any other sources.

Quantities are in units of kg/harvest, defined as the mass of an input used for one planting and harvesting cycle of the specified crop.

Quantities are in units used to describe the potential environmental effects.
Production of synthetic amino acids takes 17 to nearly 80 times the amount of energy required for production of natural ingredients.

Transportation and Other Impacts[edit | edit source] 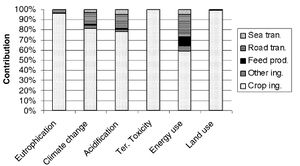 Figure 2: Graph of how each step of the feed production process contributes to impacts (H.M.G. van der Werf et al. 2004[1])

As mentioned in the Feed Composition section above, transportation of imported goods causes environmental impacts due to energy use and emissions. This section will describe the impacts associated with transportation, as well as impacts not mentioned in previous sections: land use and terrestrial toxicity. Figure 2 describes how each part of the feed production process contributes to certain impacts. Terrestrial toxicity refers to the effects of harmful metals added to the soil due to trace amounts in manure, food, and water. These metals include zinc, copper, nickel, lead, and cadmium. Land use refers to the amount of land used by a certain process. Most of the impacts associated with the feed production process are due to crop ingredients. Transportation impacts have the largest contribution to energy use, acidification and climate change.

Waste management can be a major issue in pig farming. Major issues include meeting the governmental regulations and illnesses from contamination of ground water. Waste management is any wastes associated with pig farming, including excrete and scraps from slaughter. This section looks at different alternatives of disposing of pig wastes. The section will then look at three methods currently in use for recycling pig waste. The three methods are; bio gas, fertilizer production and fish and livestock feed. The section will then briefly explain the non environmental methods currently in use which can reduce costs associated with waste management but increase the impact to the land and the environment.

The three recycling alternatives very greatly in initial cost, a cost summary is presented below in Table 4. The operation and maintenance costs of each alternative very greatly as well as vary per alternative depending on the use of by products.

The bio gas method uses anaerobic bacteria mixed with the waste in a contained digester to break down the waste in biogas digesters. The off gases from this method are collected for energy production use. The off gases are made up of mostly methane depending on the feed used for the pigs. The methane can be burned for heat or cooking. In most case studies the methane is used locally on site to offset energy use and reduce energy costs. Bio gas digesters are a closed container therefore reducing odors and pollution from the waste.  Bio gas digesters are the most expensive recycling alternative at $13.93 per square meter and $40.32 per square meter for plastic and concrete bio digesters respectively.

Fertilizer methods involve spreading out the waste to evaporate off the liquid content. In a humid area evaporation can require an evaporator which would increase the initial cost estimate. This alternative can have serious impacts in the event of rains or flooding. This method can also have strong odor.

Pig wastes can be used as feed with many applications. The waste can be used to feed livestock or on smaller scale farms fish ponds. Most pig farms use high protein diets for the pigs and much of the nutrients is passed to the waste. This method uses the high nutrient waste to feed fish for harvest.

This section outlines two non environmental waste alternatives commonly used in pig farming. These methods are generally used because they reduce costs associated with waste management however these methods generally have increased environmental impacts. Some waste material associated with pig farming cannot be deposed of using the above mentioned methods and must be deposed of using a non environmental method such as bones as well as any materials suspected to be contaminated.

Landfills are a method used for waste products. Landfills are a concentrated waste site susceptible to leak and ground contamination. Landfills commonly fill faster than the waste degrades and therefore build up. For this reason landfills are not a preferred waste disposal alternative.

Deep ponds are a method used on small rural farms where a pond is dug out with a deep center and waste is dumped into the pond. Deep ponds have a high potential for ground water contamination, deep ponds are also odorous. Deep ponds are not a preferred alternative for these reasons.