This project is currently undertaken by Dirk McLaughlin, a member of the Queen's Applied Sustainability Research Group. 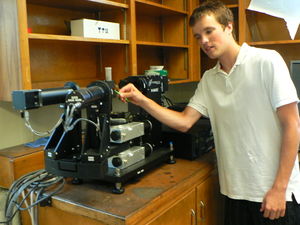 The unrestrained use of fossil fuels such as oil, natural gas and coal has contributed to global warming at a rate that seriously threatens the future of the world’s climate systems. Solar energy converted by photovoltaics is an ideal solution as an emission-free, infinitely renewable energy. However, due to low efficiencies, the cost of electricity from current commercially available solar cells is still greater than electricity from conventional sources. This research intends to help eliminate that cost difference by developing an ultra-high efficiency indium gallium nitride (InGaN) solar cell. The primary reason InGaN shows such incredible promise as a photovoltaic material is the ability to modify its band gap by adjusting the ratio of indium and gallium in the film. A multi-layered cell of InGaN can be made with band gaps ranging from 0.7eV (InN) to 3.4eV (GaN) which covers the entire range of the solar spectrum. Thus, a well-designed InGaN solar cell can absorb and convert a much higher fraction of the sun’s light energy into electricity. The first stage of research focuses on the characterization and understanding of InGaN as a semiconductor material. The final stage of research will use the accumulated data and knowledge to determine the number of stacked layers and the relative concentrations of indium and gallium within each that maximizes light absorption and, more importantly, electricity generation.

A wide variety of characterizing equipment is used for this reasearch. The Queen's Applied Sustainability (QAS) lab houses:

Additionally, equipment is used from other research groups at Queen's:

Equipment used at other universities:

Optical, microstructural and compositional characterizations have been performed to date.

An analytical model has been developed to accurately fit measured ellipsometric parameters for InGaN films (planar and nanocolumnar) covering the entire indium content from x=0 to x=1. The model was used to obtain film, oxide and surface roughness thicknesses, dielectric constants (ε1 and ε2), indexes of refraction (n), extinction coefficients (k), and absorption coefficients (α). An example of the data modelling for a planar InGaN film on a silicon substrate is shown below. 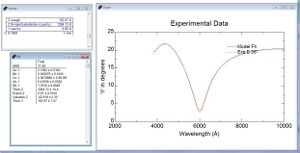 Absorption coefficients extracted from the ellipsometric models were used in the construction of Tauc plots to determine optical band gaps of the InGaN films. A Tauc plot consists of (αE)1/2 plotted as a function of photon energy (E). By extending the straight portion of the curve to the x-axis the optical band gaps of the InGaN films were determined (x-axis energy value). An example of the Tauc plot is shown below. 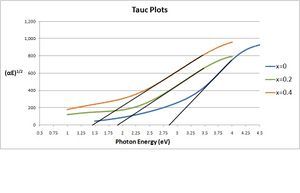 A scanning electron microscope (SEM) has been used to obtain high resolution images of the InGaN films. Top-down images were obtained for each film as well as tilted and cross-sectional images for select films. For nanocolumnar InGaN films, contrast distribution analyses were performed using top-down SEM images (example below) to determine the density or fill factor of the nanocolumns. Cross-sectional images were used to view film microstructure as well as confirm film thicknesses determined by the ellipsometry model. 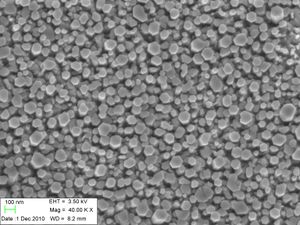