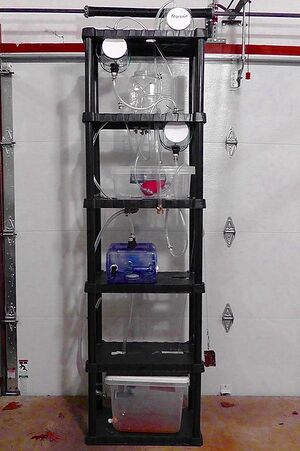 The Hydrautomat is a self-powered water pump that uses both air and water pressure to lift water up a series of open and closed tanks by means of both vacuum and pressure. The Hydrautomat was invented by Thomas Gaskell Allen in the 1920's, and was hailed as 'One of the world's greatest engineering devices',[1] and even garnering praise from the famous physicist Sir Oliver Lodge, who said of the device "I can only express my admiration of the simplicity and beauty of the invention, and my wonder that humanity has had to wait so long for the construction of an arrangement which must prove of the greatest service."[2] The Hydrautomat was about 7.5 feet high and could lift water 20 feet,[3] and could pump as much as 70,000 gallons of water per day.[4]

I am Michael Sipos (aka BlueJersey112/Blue112) and I approve of the redistribution of any of my Hydrautomat photos on this page. April 26, 2014. 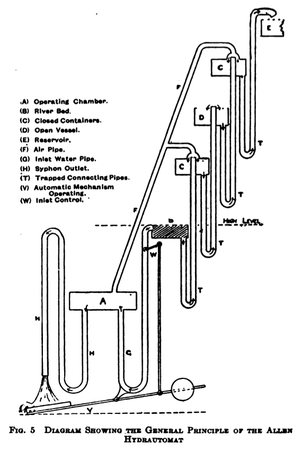 This device was successfully replicated by Michael Sipos in October of 2013.[6][7] The current replica of the Hydrautomat is a smaller modified version of the original 1921 Hydrautomat, with plastic tubing and containers in place of metal pipes and containers. The lever-type switching apparatus that T.G. Allen used was replaced with a pulley-type switching apparatus. The whole switching apparatus is housed within a plastic container (known as a Drain Tank), which increases the modularity of the device, as it can easily be taken out and repaired. The Feed Tank also has an automatic waterer attached to it, so the flow of water going into the Feed Tank will automatically shut off when the water reaches a certain level in the Feed Tank.

This version of the Hydrautomat is essentially the same as the original. And is light-weight, easy to maintain, and inexpensive to build. The device features Flexible PVC tubing (which is much easier to handle than the vinyl tubing), plastic bulkhead fittings , and a 3/4" tube with an adapter to allow the device to directly connect to a garden hose.

A closed-circuit version has also been created to allow the Hydrauomat to be demonstrated indoors. It is called a 'Mini-Mat' (or miniature Hydrautomat).[8] This device was demonstrated at the 2014 Poster Session at Raritan Valley Community College on April 29th, 2014.[9]