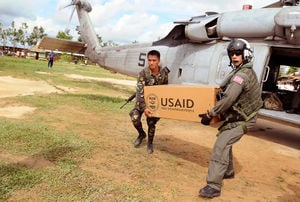 Humanitarian neutrality never existed; it's a figment of our imagination that we've finally abandoned. The provision of humanitarian aid changes the dynamics of a conflict situation. It is therefore inherently not neutral, and it was naive to ever believe it could be.

Mary Anderson started talking about do no harm in 1994 (see Do no harm), and recognized that aid has an impact on the conflict, and is therefore never neutral. It was naive of us to ever pretend it was. Here's what she had to say: "All aid programmes involve the transfer of resources (food, shelter, water, health care, training, etc.) into a resource-scarce environment. Where people are in conflict, these resources represent power and wealth and they become an element of the conflict."

Neutrality on the ground[edit | edit source]

The targeting of NGO workers in places like Iraq, Afghanistan, and Somalia is appalling, and brutally dangerous. But what protected Medecins sans Frontieres and the International Rescue Committee in Afghanistan in the 90s was not some airy-fairy belief in neutrality. It was the Taliban's belief that the NGOs were not keeping the Taliban from achieving its goals. Combatants in Afghanistan no longer believe that, or are not organized enough to enforce rules. Mourning the end of neutrality is a dangerous sidetrack that keeps the real issue from being addressed.

All of that being said, I think that a particular NGO or project can nonetheless be known as honest and fair and therefore have a humanitarian space to operate in. But that's not based on an abstract concept of neutrality or humanitarian space. It's based on earning the trust and respect of local populations, and on convincing all sides of the conflict that your provision of aid will not turn the tables against them. That's not an easy game to play, but it's the only one we have. And, despite histrionics to the contrary, it's the only game we've ever had.

The International Red Cross has been seen as relatively neutral, and has achieved much because of this; however it has often had to tread a difficult path, and refrain from responding to known atrocities, because it would have angered the offending party and led to its loss of recognition as a neutral party.[verification needed]