This article will review whats new and exciting where the worlds of cardiology and materials science meet. I hope to look at ways to improve energy efficiency in manufacturing, bio-compatibility and function.

What are Heart Stents? When are they Necessary?[edit | edit source]

It can be argued that the heart is the most important muscle in the human body. It is responsible for pumping roughly 7192 litres of blood around the body each and every day.[1] Like all muscle tissue, the heart requires a blood supply to bring in oxygen and remove waste. The coronary arteries supply blood to the heart, but they can become narrowed or even blocked by plaque (cholesterol and other fatty deposits);[2] when this happens the heart muscle doesn't receive the required amount of oxygen to function properly and may eventually lead to a heart attack.

In order to open up the blocked coronary artery, doctors will carefully guide a deflated balloon to the blockage, where it is then inflated, pushing the plaque back up against the artery walls. This process is known as an angioplastyW. When the balloon is removed the vessel is supposed to remain open, this however, isn't always the case as the walls of the vessel can be weakened by the stretch of the balloon. According to the American Heart Association 40% of arteries opened with balloon angioplasty alone close again within six months [3] by placing a stent in the artery, the amount of restenosis (or closing of the artery following an angioplasty) is reduced to 25%.[4]

A heart stent is a wire mesh tube that is placed in the artery during an angioplasty after the balloon is inflated. It remains in place and acts as a scaffold pushing the plaque back against the coronary artery walls. In 1986 the first metal stent was successfully implanted into a human heart in Toulouse, France by Jacques Puel and Ulrich Sigwart, but it wasn't until 1994 that they were approved for use in the United States.[5] Research into why arteries continued to close 25% of the time even when a stent was present revealed that smooth muscle cells were growing in response to the "controlled injury" caused by the angioplasty, much in the same way scar tissue forms in response to injury elsewhere.[6] To prevent this from happening scientists and researchers began coating the metal stents in medication that interfered with the body's tendency to develop smooth muscle cells around the stent. In 2003 the first study was published showing that these drug eluting stents decreased the chances of restenosis to 5%-7%.

The rest of this article will examine how bare metal and drug eluting stents are manufactured and what the future holds for this product.

To be effective, a heart stent must be both strong enough to resist the recoil from the vessel after it has been opened, and flexible enough to be threaded through to the blockage without causing damage to the vessels it passes through on its way. In the case of a drug eluting stent, the drug must be fused with the stent in such a way as to ensure its flexibility, and controlled drug release. It is especially important in the case of drug eluting stents that the stent conform to the walls of the vessel to ensure even drug distribution. A heart stent can be broken down into two components: the metal that forms it's base and provides the required strength, and the polymer coating that carries and releases the drug.

This is the traditional choice for bare metal and drug eluting stents.[7] 316L is a low carbon steel that is resistant to corrosion and is bio-compatible. Its chemical makeup is below:[8]

The optimal hot working temperature for this metal is between 1150-1260°C. 316L is subject to work hardening if processing is done too quickly. The increase in brittleness that results is not a desirable characteristic in heart stents which are required to be flexible, as a consequence A to Z Materials recommends processing 316L at low speeds and constant feed rates.[9]

This is a new alloy choice for the manufacturing of heart stents.

L605 is available in tubes with appropriate diameters to fill the affected vessel (from 0.8mm to 2mm). These tubes are machined into the desired geometries using high precision lasers. Laser cutting is followed by extensive chemical and mechanical cleaning.[10]

MP35 Cobalt Nickel is composed of:

Besides being used in the manufacturing of heart stents this alloy is often used in marine environments because of its resistance to corrosion in harsh environments.

In early experiments the drugs designed to prevent restenosis were fused directly with the stents. The drastic shape change that resulted when the stent was expanded to fill the blocked vessel caused the drug coating to crack and flake off. Consequently, the drug was not delivered evenly over the entire surface of the stent. Scientists realized that by impregnating a polymer with the anti-restenosis drugs and fusing this polymer to the metal stent they not only avoided cracking and uneven drug delivery, but that they were also able to control the rate and timing of drug release. As with the selection of metal used, the polymer selected must also be bio-compatible. The drugs are embedded in a polymer matrix. Factors that control the release of drug from the matrix include the concentration of drug loaded into the matrix, and the permeability of the polymer. Selection of polymer characteristics and drug concentration is determined based on the method of action and properties of the anti-restenotic drug selected[12] Different approaches for controlling the release of the drug are described below.

The Taxus stent is an example of a coronary artery stent coated in a single polymer layer (chemical name: poly(styrene-b-isobutylene-b-styrene). Initially higher levels of drug are released from the polymers surface, after a few days this rate is decreased and a low level of drug release is sustained.

A drug-free layer of polybutyl methacrylate forms a barrier between the drug containing polyethylene vinyl acetate layer (PEVA) and the vessel wall in the Cypher drug eluting stent. The outer layer serves as a barrier to drug diffusion slowing the release of the drug to the surrounding tissue, and protects the vessel tissue from the non-biocompatible PEVA. Even with this barrier present, the two layer polymer stent releases more anti-restenonic drug into the surrounding tissues than does the single polymer layer.

Although initial results showed drug eluting stents to be more effective in reducing restenosis, further research has revealed that the polymer coating is linked to stent thrombosisW that occurs anywhere from a few days to three years after implantation of the stent.[13] This phenomenon is reduced to the same level as with bare metal stents as long as patients continue to take anti platelet therapy.[14]

Scanning electron microscopes have been used to examine the polymer coating following balloon expansion, scientist believe that these defects in the polymer layer may contribute to the increased level of thrombosis.

From a Tube[edit | edit source]

American Patent No. 2008/0114449 A1 describes a method for manufacturing stents that allows different grain sizes to be achieved in different areas of the stent, to provide different values of yield strength.[15] Grain size is inversely proportional to yield strength. Areas of the stent with different widths to optimize drug delivery are subjected to the same amount of force during deployment. By changing the yield strength of these areas some of the defects described above by Ge Junbo regarding defects in the polymer from expansion could be avoided. The following image is taken from the patent application and details where the different sized grains are located. The area with the smaller grain size has the larger yield strength. The connector areas (Wc) can sustain the strain of expanding the stent, the high yield strength in this area also allows the connectors to conform to the vessel walls more easily. By employing multiple microstructures the stent can have both radial strength (from the large grains) and flexibility (from the high yield strength of the smaller grains) 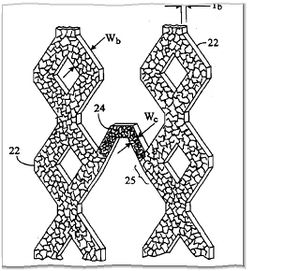 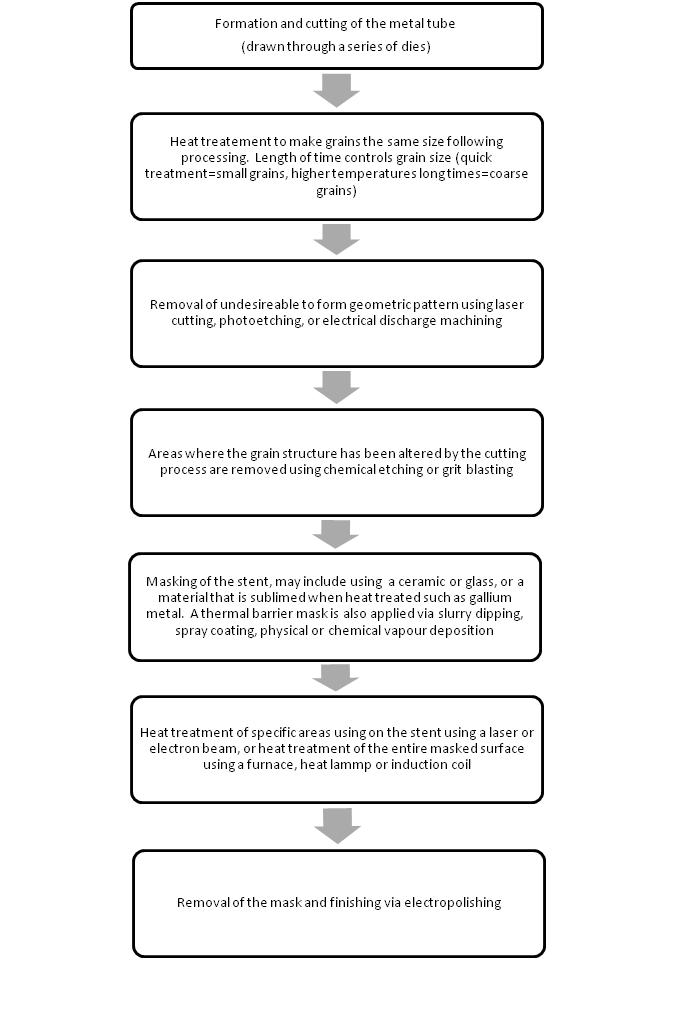 Another method of stent manufacturing includes bending coiled wires into the desired pattern then weldingW or brazingW them together so that they hold their shape and to create different composites. This process is labour and energy intensive.[16] 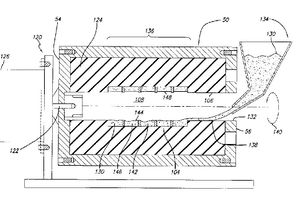 Figure 2. Set up for rotational molding. 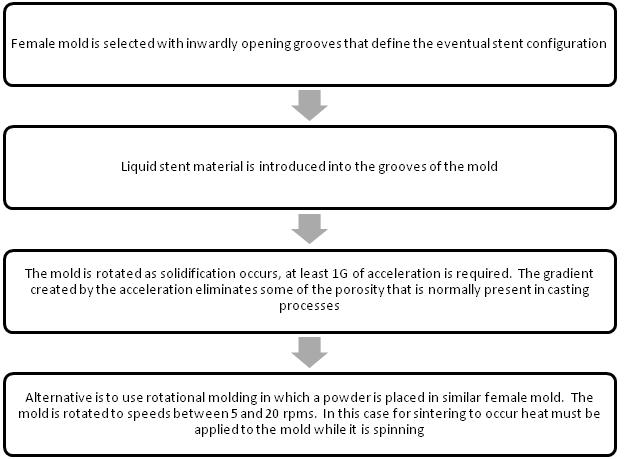 Figure 2 on the right shows the set up for the centrifugal or rotational molding process. The mold would be rotated along its horizontal axis in this case, and material would be introduced into it via a reservoir (134 on the diagram).

An adhesion layer is deposited on the surface of a bare metal stent using electrochemical deposition or ion beam assisted deposition. In the later process, atoms having relatively high amounts of energy (0.8-1.5keV) are bombarded at the substrate and condense on the surface. Suggested materials for this process include gold and palladium because they are biocompatible and capable of bonding with a capping layer (another metal – usually platinum) or a biocompatible polymer [17] The stent is then dip coated, or solution cast onto the prepared metal stent. Extrusion blow molding or injection molding of the polymer around the stent can also be used to cover the surface. Examples of appropriate polymers include: polyolefins, polyamides, polyesters, fluoropolymers, and acrylics [18]

The Genous stent by OrbusNeich in the Netherlands is being developed to go beyond simply preventing cells from sticking to the stent as in the case of those that elude drugs, but instead promotes healing of the vascular injury created during stent placement by capturing the cells circulating in the blood that will eventually develop into endothelial cells. Endothelium are the cells that naturally line the vessel walls, by trapping the progenerator cells the stent is lined with the cells and essentially camouflaged from the body, this process occurs within 72 hours. These stents begin as bare metal stents (316L Stainless steel) which are then primed to accept a biocompatible intermediate coating. Anti-hCD34 antibodies are covalently bonded to the intermediate coating, these antibodies are responsible for trapping the progenerator cells.[19] Experiments completed in porcine models suggest that binding of the progenitor cells to the stent surface can happen as quickly as 15 minutes after introduction to the body.[20] Within 48 the entire stents were covered with a monolayer of endothelial cells. Orbus Neich anticipates that similar if not improved results will be seen when implanted in humans because the Anti-hCD34 antibodies are specific to humans and 65% more effective. Tests have been completed in human subjects in Europe, with promising results. Blood clots were experienced by 1% of patients, 5.4% required an additional procedure and 2.1% died of cardiovascular conditions.[21]

Abbott has developed and successfully implanted a stent that is fully absorbed by the body after two years. The clinical test was completed using 26 patients, none of whom experienced any stent thrombosis (blood clots) or myocardial infarctions [22] Further tests have shown that not only is the stent reabsorbed by the body, but that the vessels show structural improvement; a 12.7% decrease in plaque area is observed as well as a 10.8% increase in the size of the vessels.[23] Limited information is available on the exact make up of this stent as it is still in development. It is manufactured from a magnesium alloy[24] that when broken down releases lactic acid, carbon dioxide and water.[25]

A number of factors should be considered when examining the energy efficiency of heart stents. These include the energy that goes into harvesting the raw materials, and processing them to a point where they are ready to be turned into stents. For the materials considered above the energy demands are as follows [verification needed]:

Some of the biggest energy savings will result from eliminating the need for stenting procedures altogether, by avoiding coronary artery disease.[expansion needed] When that is not possible, ensuring single operations with low restenotic rates, and decrease dependence on prescription medication; there is potential for this to be achieved with some of the new technology using antibodies to trap progenitor cells, or with the bioabsorable stents.