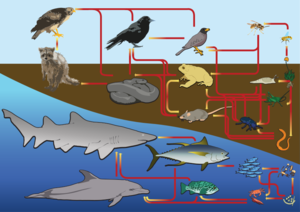 Example of a food web

A food web refers to the linkages of different and overlapping food chains in a community (a community being the populations of different species living together in the same area) within an ecosystem. Different food webs can be found within one community. Within the same community, some species from one food web may feed off species from another food web. A network of food webs then forms more extensive and complex food webs and eventually the most complex food web composed of all life on Earth.

Originally termed a "food cycle" when Charles Elton first discerned the concepts of it in "Animal Ecology" (1927), along with food chains and food size, the term was later changed to the term food web, as is used now.[1]

Another term for the food web is "consumer-resource system".[1]

Feeding is the manner by which animals obtain the energy to survive. The passing of energy through a community by feeding or "trophic" links creates the interconnections that form the food web.

Species are divided according to type of food groupings, or "trophic levels". These are as follows:

Within a food web, trophic levels are limited to five or six at most.

Removal of part of a food web tends to have major consequences for the rest of the food web. For example, remover of a predator can cause an explosion in a herbivore species that then decimates the local plant life, which cannot produce sufficient seeds to recover in time.