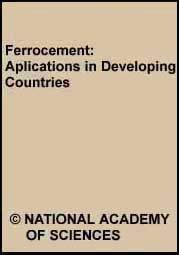 The problem of food storage in the developing countries is emerging as a major subject of attention from technical assistance organizations. Increasing supplies of food grains, such as rice, wheat, and maize, resulting from the Green Revolution have caused an unprecedented need for grain storage in developing countries, yet most production areas are still unprepared to store this new abundance adequately. Figures in the order of 25 percent indicate how much grain is lost to inadequate harvest and inadequate storage facilities and practices. In addition to grain storage, facilities are urgently needed to protect all products sensitive to temperature, humidity, rain, wind, pest animals, bacteria, or fungi. Other typical products requiring storage are peas and beans; oil crops such as peanuts and soybeans; salt; drinking water; and related nonfood items such as fertilizers, pesticides, and cement. Major needs are small-scale silos, particularly for on-farm storage.

A particular advantage of ferrocement in building food-storage facilities in developing countries is its adaptability to an almost unlimited range of curved shapes and local conditions. Ferrocement silos require little maintenance, and they offer protection against rodents, birds, insects, water, and weather. Ferrocement is watertight, and, with appropriate sealants, it can also become airtight (see Appendices B and C). In an airtight ferrocement bin, respiration of grain, or similar products, quickly removes oxygen from the atmosphere inside and replaces it with carbon dioxide.* Any insects (adults, larvae, pupae, or eggs) or aerobic microorganisms present cannot survive to damage the stored product. No fumigation is needed. Hermetic storage of this kind is "particularly suitable in the tropics for the storage of dry grain."

Methods developed for ferrocement boatbuilding can be applied to storage facilities to yield a structure of high quality. Ferrocement silos could be built in a factory, but they are particularly adaptable to on-site construction, an important consideration in remote areas without even vehicular access. As with other applications, silos require only simple artisan skills, performed by local labor with minimal supervision. In Thailand, workmen with experience acquired in the construction of a single silo have been able to supervise unskilled laborers. In many developing areas, building a food-storage facility with ferrocement is not very different from building a traditional one. In principle, the wire mesh is a substitute for bamboo or wattle mesh, and the cement mortar is a substitute for mud. Indeed, bamboo, instead of wire mesh, reinforcement might be technologically feasible if care is taken to avoid delamination caused by expansion of bamboo when it absorbs moisture.

Ferrocement can be considered for silos with curved walls, in sizes to hold 1-30 tons of grain or more. The base can be continuous with the walls, making a strong, monolithic construction (as in ferrocement boats) to prevent foundation failures and moisture damage from floods or a high watertable in the soil. Silos can be easily sealed against air or water vapor with a rubber- or bitumen-based paint.

Appendix B contains photographs of ferrocement silos developed and tested by a government research institute in Thailand for the special needs of a humid, tropical country. Bins with capacities of 4-10 tons all have sloped walls of the same height, with base and top diameters that vary in size. For larger capacity, the Thais built clusters of bins, though larger bins and connected side-by-side modifications are under consideration. Clusters have the advantage that only one bin at a time need be opened to withdraw the product while the low-oxygen atmosphere is maintained in the others. (See also Figure 1 1.)

In contrast to the above-ground Thai silo, an underground ferrocement storage unit has been developed in Ethiopia to replace the traditional unlined storage pits (see Appendix C). Also, it is reported that a similar underground storage system "has gained wide acceptance in Latin America where several millions of tons of produce are stored in these hermetic underground pits.

Where grain and similar food crops can be stored with confidence, banks can lend money for construction of silos, using the crop as mortgage collateral. Traditionally, farmers borrow money (often at high interest rates) to plant their crops, then sell the product at harvest time-when its price is lowest-to pay their debts. A silo that enables a farmer to store his harvest gives him the opportunity to sell in the off-season, usually 4-6 months after harvest, when prices may increase 40-100 percent. The farmer can also store bulk food and seed for his family's needs without the loss he faces by using traditional methods.