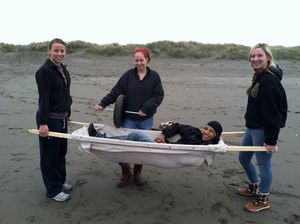 Human testing of the stetchbarrow!

The Stretchbarrow is a device designed to carry beach grass. It was created for the Friends of the Dunes organization as a method of hauling invasive beach grass after it has been removed. The stretcher-wheelbarrow design was created by a group of students from Humboldt State University's Engr215 Introduction to Design class.

The goal of the Friends of the Dunes is to conserve the natural diversity of coastal environments. In order to effectively do this, volunteers systematically remove the invasive beach grass from the dunes in Arcata, CA. The Stretchbarrow was designed to transport the removed beach grass from the Humboldt Coastal Nature Center to awaiting vehicles for offsite disposal. The stretcher can be used by two or more people, or can be added to the separate wheel and axel to be used by one person.

The objective was to supply a means of transporting beach grass from the dunes to loading vehicles at the Humboldt County Nature Center. The volunteers using the device need a way of carrying large amounts of grass a short distance, and also a device that can be used by one person, if the need arose.

The criteria were distinguished by our group in co ordinance with the client in order to weigh different aspects of our alternative solutions to come up with the best solution possible.

The stretchbarow design consists of a stretcher with long, wooden handles that can be carried by two or four people. These handles can also be attached to a separate axle with two wheels so that it can be used as a wheelbarrow as well for more convenient use by a single person.

The stretcher is made of four pieces of oak 2 x 2's, making a rectangle. A drop cloth is attached to the center of the rectangle to create an area for the beach grass. The dowels are held together by screws, and the drop cloth is attached to the wooden frame by screws as well. The cloth drops down in the middle by about a foot to maximize the volume.

Two wheelbarrow wheels are attached to a metal axle to be added to the stretcher for use as a wheelbarrow. The wheels are six inches apart to spread out the load of the weight so that it will be easier to use on sand.

On one end of the stretcher, both handles have curved brackets on the bottom side for the ends of the metal axle to slide into. These are placed six inches in from the ends of the handles.

To remove the wheels and axle, remove the pins from the axle and push it all the way to one side. Take out one end, and then pull it the opposite way to completely remove it.

The design cost accounts for the total time the group spent on the project outside of class. The combined times sum up to about 200 hours, most of which can be attributed to Phase 5 of the design process. The figure below shows the distribution of hours allocated to each phase. 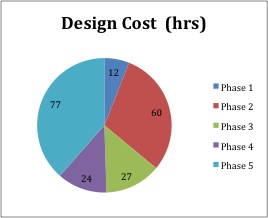 The stretcher is able to hold about 1.5 cubic yards of beach grass, and approximately 150 pounds. The materials are so durable and the design is so strong, that can steadily support an average size human being. When attached to the wheel and axle, the device does experience some inevitable resistance with the sand, but it ultimately functions well.

Instructions how to build the design and keys on replicating it.

How to Construct the Stretchbarrow: 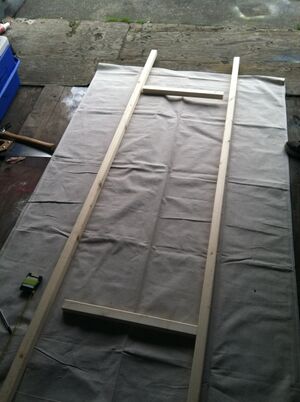 Frame of Stretcher
Build the frame using two 8' members and two 19 members. Measure out and mark drill holes. Drill holes for the screws.
2 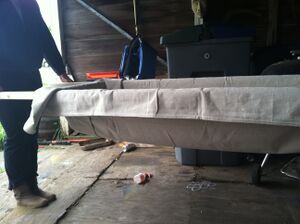 Draping Cloth
Drape cloth and fold slack in on the corners.
3 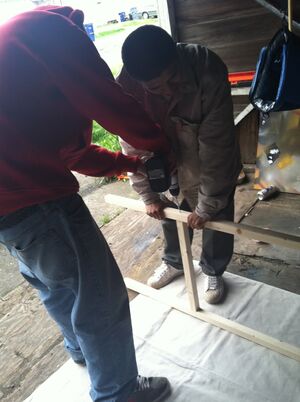 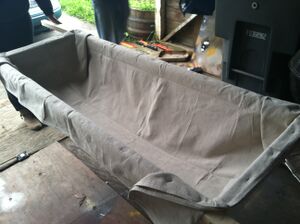 Staple edges
Staple loose edges on under side of wood.
5 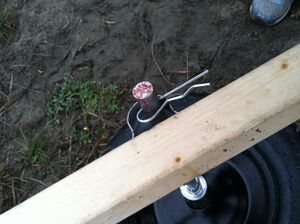 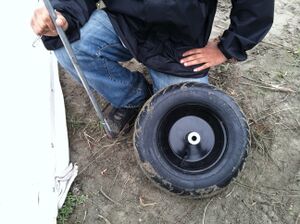 holes in axle
Cut and Drill Holes in axel.
7 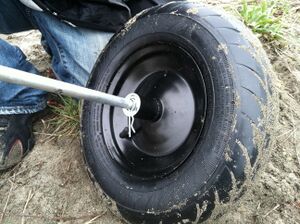 Pinning in Wheel
Pin down wheel.

The next steps for the Stretchbarrow could be using round wooden dowels instead of square ones so that the user has a more comfortable handles. Another next step could be to make the piece of canvas detachable so it can be replaced if it rips.

Stretch Barrow is still being used by volunteers on restoration days. It was last used during the sand sculpture contest last July. In the picture to the left there is a large pile of grass that was removed and then moved using the stretch-barrow.