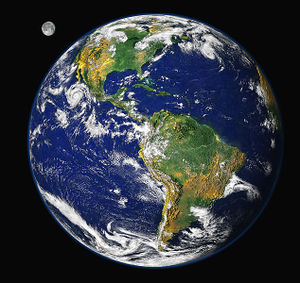 The scope of the biophysical environment is all that contained in the biosphere, which is that part of the Earth in which all life occurs. A biophysical environment is the complex of biotic, climatic, and edaphic factors that act upon an organism and determine its form and survival, and morphs itself in the process. Ecosystems, of which there are numerous types and are a defined part of the biosphere, collectively make up the whole of the biosphere. Within an ecosystem there are habitats in which an organism (including human beings) exists. At its most natural state, an environment would lack any effects of human activity, although the scale of this activity is such that all areas of the Earth have had at least some influence by humans. At the other end of the scale is the built environment and in some cases it has the biotic component that is virtually absent.

The biophysical environment can vary in scale from microscopic to global in extent. They can also be subdivided according to their attributes. Some examples may be the marine environment, the atmospheric environment and the terrestrial environment.[1]

Environmentalism is a broad social and philosophical movement that, in a large part, seeks to minimise or eliminate the effect of human activity on the biophysical environment. The issues of concern for environmentalists usually relate to the natural environment with the more important ones being climate change, species extinction, pollution and old growth forest loss.

Page data
Retrieved from "https://www.appropedia.org/w/index.php?title=Environment_(biophysical)&oldid=633461"
Cookies help us deliver our services. By using our services, you agree to our use of cookies.
Categories:
About Appropedia · Policies · Contact · Content is available under CC-BY-SA-4.0 unless otherwise noted.