Electric cars are cars powered by an electric motor, one or more controllers, and a large stockpile of batteries[1]. These vehicles plug into a source of electricity like a special recharging station (or -in the case of plug-in cars- in wall sockets) to recharge the battery. The main defining feature of an electric vehicle is that they have no gas engine. Unlike traditional plug-in electric vehicles (PEV’s), which rely only on batteries, hybrids have an additional source of power. Hybrid vehicles are “vehicles with internal combustion (IC) engines, also containing an electric motor and a small bank of batteries that assist the IC engine.[2] They can’t be plugged in for charging the battery, but instead rely on the conventional gasoline engine motor for charging the battery and/or a regenerative braking system. There are three types of electric vehicles that exist: battery-electric vehicles, conventional hybrid-electric vehicles, and plug-in hybrid vehicles.[3] 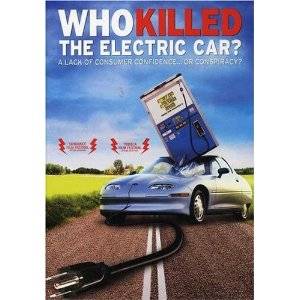 Fig:1 Who killed the electric car?

Electric propulsion was not first used in other vehicles than cars. The locomotive was the first fully electrical vehicle and was created by Werner Von Siemens.[9] The first fully electric type of transport in US America was a rail operation in 1888 created by General Electric. By the year 1891 a man named William Morrison put an electric motor in a car. Electric cars were supposed to be the car of the future and got a lot of attention in the 1890’s and early 1900’s.[10] However due to a breakthrough in internal combustion engines, cars that used gasoline ruled the 1900’s. Now in the 21st century, hybrids and electric cars are making a comeback due to the push for green modes of transport and current high prices of petrofuels (gasoline, Diesel, LPG, ...).

Battery-electric cars are in a class of their own when it comes to saving gas. Due to the fact that it’s uses only a battery to power the electric motor[12], it uses no gas. The distance you can travel with it greatly depends on the load, and speed. You will need to use more energy on heating (but much less on cooling), which reduces the miles range. Depending on how much it has to carry, the load will affect how hard the battery has to work. If you like to go fast, don’t expect to go far. Like most cars, BEV’s can travel further at a controlled comfortable speed. That range depends on the model. The definitive guide is, what is the KWhr battery:curb weight (Kg) ratio. A good ratio is 0.020; a bad one is .036. A bad one tells you that the car has not been designed originally as an electric. Currently, advice from manufacturers is that extension leads cannot be used for charging at a normal household outlet. This is not true. Normal extension leads use twisted copper for flexibility. However household wiring cable can be used for charging. A 30 Metre cable for an 12 Amp 240V load is possible, however, household wiring cable is not designed to be handled regularly, as it is stiff, so use large loops of it and handle it carefully to avoid any kinks in the cable. Alternatively, use a heavy duty extension cable. A very useful amount of charge can be gained in just 2 hours. Use the BEV user manual to estimate how much extra range you will get. BEV's (Plug-in cars or Electric cars). They are simple in construction (one Californian company uses 10K parts [25-30K parts in a conventional car]) and like a DVD drive or laptop battery, need little maintenance; brakes are not used as much as in a gas car as there is considerable braking effect when the vehicle re-generates while slowing down. Servicing costs are much lower than gas cars (which typically have 20-30,000 parts), especially as the vehicle ages. Various battery leasing schemes are available that typically guarantee a 80-90% performance. My car has 85k miles and has not needed any parts (apart from tyres & windscreen wipers & a12v lead acid battery [$70]). Its RANGE is the approximately 15% less. Range can be improved by gentle (not slow) cornering & taking a warm coat instead of using the heater and the tyre pressures MUST be correct, not low. All BEV cars (2020) have fast charging (7-22kW) capability which provides 20-30 miles per hour of charging. Vehicles are the simplest of all cars to drive & every passenger says how silent and trouble-free the experience is. Many drivers say BEV's have put the fun back into motoring. Approximate costs. Purchase costs are higher than a gas car but this is offset by very low running costs (approximately 1/6th that of the most efficient gas car). A typical UK micro hatchback Electric car in the UK (if the decision is to throw the car away after 10 years) is likely to save £6500 over a similar gas car (on a 10,000 mile per year basis). After the decade, the range will very gradually reduce, but the servicing savings will be even more beneficial. Various local schemes exist for free parking in cities, and over 185,500,000 lock-able electric points are listed (2020) on [1]. There are 37,500 public charge points -more than gas stations-in the UK (Jan 2021). Slow rate charging (3kW) is often supplied in unlimited amounts in the UK for a monthly payment (usually approximately £20 -2020). Fast rate charging (7-22kW) & rapid (25-99kW) charging is costed at a kWhr rate by the supplier & provides 50+ miles extra range per hour of charging. There are 7,850 UK rapid charging points (2020) allowing 'empty to full' for a mid-sized BEV in approximately one hour. Green issues. The CO2e for manufacture of a conventional mid-range petrol car is approximately 17 Tonnes; for a traditional car manufacturer converting an existing petrol model to electric, it is approximately 10-15 Tonnes; for the newest only-electric car manufacturer from the USA, it is 5.1 Tonnes (most of the manufacturing is with renewable energy). To have guilt-free motoring it is possible to buy renewable power, marginally more expensive but those costs have already been factored in above.

Hybrid-electric cars[13] use both gas and electricity to propell the car. Cars running on a IC engine ('ICE') typically use a lot of gas at times when they come to a stop or pick up speed after a stop[14]. The electric motor is used to eliminate the siphoning of gas at these particular moments. In a (series-)parallel hybrid-electric car, the electric motor is used when a car is idle until a speed of 30- 40 mph. Past 40 miles, the other half of the hybrid system - known as the internal combustion engine - takes over. This is a switchable function. The hybrid gets its name from being able to use both the electrical motor and the combustion engine. It may also charge the battery by using the kinetic energy from braking and redirecting that energy back to the engine. An example of a hybrid would be the Toyota Prius[15]. In terms of CO2e for manufacture and use ('well to wheel'), all hybrid cars have little environmental benefit, most of the benefit is in fuel saving and reduced pollution in cities. They are complicated to service, so a reliable brand is recommended.

Plug-in hybrid-electric cars are a subdivision of the hybrid-electric car. PE-cars (Plug-in hybrid cars) have a slightly larger battery than hybrid cars. MOST HAVE AN ELECTRIC RANGE OF 20-30 MILES. A longer charge making it possible to avoid using the internal combustion engine for a few miles more.[16] As long as the car isn’t used passed the point of its all-electric range, the Plug-in hybrid is able to avoid using any petrol at all. Large hybrid cars are less environmentally friendly than a very small gas car in terms of fuel consumption and a number of studies show that the electric motor is used between 5 and 20% of the travelling time. One criticism of this class of vehicle concerns the charging time. THE MAXIMUM CHARGE RATE OF ALL HYBRID CARS IS ONLY 3KW. (That is 1/75th the rate of the fastest CCS or Cha de Mo charging stations. The hybrid-electric car is designed to be charged at night, not at public points because a plug-in hybrid can occupy a slot for 4 times as long as a fully electric car needs on a MEDIUM speed (7-25 KW) point. Additionally, a fully electric car will benefit from 5times the range in the same period of time. A number of manufacturers who are entering the market with VERY HEAVY conventional cars with a small added battery and small electric motor seem to pay 'lip-service' to green principles. Servicing for an old hybrid car will be very expensive because of the unnecessary complexity.

Electric cars are just one way to “go green.” There a many benefits to electric cars including lower maintenance and maintenance cost, not having to go to the pump and most importantly its overall impact on the environment. Electric cars (and vehicles) are classified as zero-emissions vehicles (ZEVs) meaning they produce zero emissions from the actually vehicle. The minor emissions that are released happening during the generation of electricity, but even these emissions can be eliminated depending on how the electricity is generated—if its generated from a renewable energy source such as wind, solar, or hydrogen. According to the [17] “electric vehicles create only 1 percent of the pollution generated from the cleanest gasoline vehicles.”

Page data
Retrieved from "https://www.appropedia.org/w/index.php?title=Electric_cars&oldid=625031"
Cookies help us deliver our services. By using our services, you agree to our use of cookies.
Categories:
Maintenance categories:
Comments
Privacy policy · About Appropedia · Disclaimers · Mobile view · Content is available under CC-BY-SA-4.0 unless otherwise noted.
</html