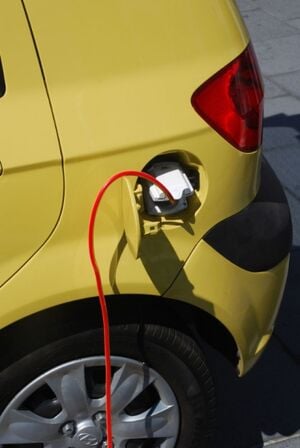 Electric vehicles are vehicles powered by an electric motor. They include:

There are different types of electric cars. Some have only one engine, which is (of course) electric. The problem is, that the range of such a car is still quite short.
In the future, when battery-technology is better and batteries' capacity will be higher and the costs will be lower, pure electric cars will be more popular.

1. The combustion engine produces energy to run the electric engine. In these technology the fuel-driven engine is used as a generator.
2. The combustion engine is only used, when the car accelerates strongly. So the car needs no fuel when you drive slowly or break. This system is called "Series Drivetrain"
3. The electric engine is only used when the car accelerates. When the car drives slowly or you cruise, energy from the engine gets stored in the battery. You call this system "Parallel Drivetrain".
4. When you drive slowly, only the electric engine is used. When you accelerate, the fuel-driven engine engages, but not all its power is transferred to the gear: A power drives the gear and a generator that produces electric energy, which is stored in the battery. This technology is called "Series-Parallel Drivetrain".

These different technologys also have some similarities: They use the energy of the breakes. So the engines are used as generators when the car slows down. The produced energy can be stored in the batterie and the range of the car increases a bit.

The electric motor was after the steam engine , the second mechanical drive for vehicles. Later came as a drive yet added the internal combustion engine. In the 1830s, Robert Anderson is said to have built a "electro barrow" . First electric vehicles for rail transport were tested and operated in 1842 by Robert Davidson on the route Edinburgh - Glasgow, 1851 by Charles Grafton Page in Washington DC and in 1879 by Werner Siemens in Berlin.

The first three-wheeled electric vehicle for the road , the Trouvé tricycle was built by Gustave Trouvé in Paris in 1881 . It is often confused with the later built Ayrton and Perry Electric Tricycle . While the Trouvé Tricycle still had the pedal drive (and thus in the narrow sense represents a moped) , the Ayrton and Perry Electric Tricycle could only be operated by purely electrically .

The first four-wheeled electric vehicle is the Flocken electric car, which was developed in 1888 by the Coburger fabricant Andreas Flocken . This first " real" electric car developed by integration of an electric drive in a horse-carriage . The carriage wheels were about a decade later replaced by wheels with rubber tires, which up to today in electric cars the usual tires has remained.

In the 1930s, National City Lines , which was a partnership of General Motors,Firestone , and Standard Oil of California purchased many electric tram networks across the country to dismantle them and replace them with GM buses.

In the 21th century the industry developed more and more vehicle which is able to use green Energy form the socket. The car industry knows that this step is important, because when they miss this step other companies or manufactures came and do this. Furthermore green energy is the further of our world. If you looked at the big company like BMW for example, you can see that they create tow new cars for the customers. In the year 2014 they present the i8 and the i3. This two cars have the best and the highest technology in there.

The BMW i8, first introduced as the BMW Concept Vision Efficient Dynamics, is a plug-in hybrid sports car developed by BMW. The 2015 model year BMW i8 has a 7.1 kWh lithium-ion battery pack that delivers an all-electric range of 37 km under the New European Driving Cycle. Under the United States Environmental Protection Agency cycle, the range in EV mode is 24 km with a small amount of gasoline consumption.

The BMW i3, previously Mega City Vehicle, is a five-door urban electric car developed by the German manufacturer BMW. The i3 is part of BMW's "Project i" and was launched as a new brand, BMW i. The i3 is BMW's first zero emissions mass-produced vehicle due to its electric power train, and BMW is the first company to launch a volume production vehicle on the market featuring carbon-fiber reinforced plastic to improve the vehicle's energy consumption.