This article deals about the differences between electric motors and the most appropriate forms for particular tasks.

One of the main differentiation we can make between the engines is on whether they use AC or DC power. Surprisingly however, in practice, this doesn't really matter that much since the engines are so different on regards to weight, efficiency, durability, ... There for example isn't a "AC" version of the Brushed or Brushless DC engine, ... Instead, each engine is different, and is most suitable to a specific type of application.

Another differentiation can be made on regards to 1, 2 and 3-phase engines. In general, most engines can be made in 1, 2, and 3-phases, so the phases refer to the subtype of engine, and not an engine category on its own.

The way on how the engine is different lies in how the electromagnets (poles) are made. With 1 phase engines, there is 1 wire making the poles (arranged in series). With 2 phase, there are 2 wires, and with 3-phase, there are 3.

The difference lies in that the rotation speed of the engine (and hence the power output) can be regulated to a greater extent (although this also depends on the type of electric engine used). With 3-phase engines, it may be possible to eliminate a gearbox in some situations. The same can however also be done with a controller (ie with Brushless DC engines), pulse width modulator (ie with Pancake DC, ...), or variable frequency source.

Another difference is that the more phases, the greater the total power output can be (more powerful engines are possible), the more power the engine has compared to its size/weight, and (possibly) the greater the efficiency. The tradeoff is however the increased complexity of building and increased cost (the latter depending again on the type of engine chosen).

Finally, a last benefit is reduced power loss over electricity lines (connected to the engine). The latter however is only of importance if the power source is very far away.

In general, we must see the required power output of the engine, the application where the engine is to be used for, and the type of engine used in the first place; only then can we assess whether it's useful to have 2/3-phases or not.

Some electric motors have, due to their design (windings, ...) no need for gears. Instead, they change their electrical output automatically, themselves. Other electric motors do benefit from gears, and thus require a more complex setup. The addition of gears also adds to the weight of the entire system.

Most useful of motor depending on the application[edit | edit source] 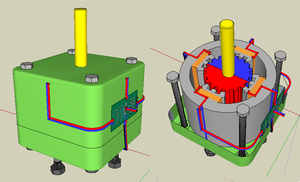 Why no brushless DC engine, or other types ? Because the brushless DC engine can be replaced by the AC induction motor. The fewer types of engines, the easier people can be trained the theory of the engines, as well as the skill of building them. Also, the AC induction motor can be built at lower cost, and is more durable. The only disadvantage is the AC power supply; given that most vehicles, ... use DC power (lead-acid battery), a inverter is needed.