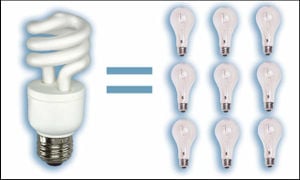 Compact Fluorescent Light bulbs (or CFLs) use less energy and last longer than conventional incandescent bulbs. They save you money in the long run and you do not have to change them as often. In addition, because they use less energy, they are better for the environment.

Will CFLs work in the home?[edit | edit source]

Will CFL bulbs really save me money?[edit | edit source]

YES! For typical electrical rates in Pennsylvania (some of the lowest rates in the world) for example each retrofit CFL will save over $30 over its lifetime.

How does a CFL bulb work?[edit | edit source]

Compact fluorescent lamps are arc discharge lamps that produce light by exciting mercury vapor. Electricity is applied to the electrode at the end of the lamp where it excites the mercury. Once the mercury is excited, it carries the electrical current via an arc across the lamp to the other end. The excited mercury produces most of its energy in the ultraviolet (UV) range. The UV energy stretching across the lamp activates a phosphor, the white coating on the inside of the bulb, which emits visible light.

Are CFLs really good for the environment?[edit | edit source]

Yes! Consider switching a single 100W incandescent bulb for a CFL bulb that produces as much light but uses only a ¼ of the energy. Every CFL bulb assists in reducing climate destabilization caused by greenhouse gas emissions. Here is a list of the pollution prevented by changing only one socket from an incandescent to a CFL bulb:

Can I use CFL bulbs if I will be turning the lights on and off frequently?[edit | edit source]

Compact fluorescent light bulbs work best if they are left on for over 15 minutes each time they are turned on. CFLs can take up to 3 minutes to warm-up to reach the point of most efficient operation. Frequently switching them on and off can shorten the life of the bulb. If the life of the bulb is shortened significantly, you will not reap the full financial benefits (includes energy and life of bulb).

The old ones did but they do not anymore. Due to phosphors in the new bulbs, the quality of light can now be manipulated and three-way CFLs are now available. The greenish cast is gone and the light has the same softness of the conventional bulbs we are used to.

Do CFL bulbs flicker and buzz like the fluorescent lights in old buildings?[edit | edit source]

No. Modern CFL bulbs utilize harmonic technology to eliminate the old problem of flicker and buzzing. This is not true of all compact fluorescents as inferior brands still have that problem.

What should I do if I break a compact fluorescent light bulb?[edit | edit source]

When a bulb is broken, the best thing to do is to wear chemical resistant glove to clean it up. The gloves you buy in the supermarket for household cleaning are sufficient. The gloves protect your skin from absorbing the mercury and from getting cut by the glass. The remains of one lamp can be disposed as normal waste since the amount of mercury is extremely small.

Can I use CFLs with a dimmer?[edit | edit source]

Standard CFLs cannot be used with a dimmer switch. However, there are dimmable bulbs, although they are more expensive. There are also 3-way bulbs.

Assuming you have the lights on for 8 hours a day you will save ~$1.12/month for every 100W fixture you switch to CFLs. The CFL will pay for itself in less than 6 months – and then you reap over 2 years of pure profit while saving planet! CFLs also have a much longer life than conventional incandescents.

Note that the quality of fluorescents can vary enormously. In general to avoid this problem either i) buy from a manufacturer that you trust, ii) purchase from a vendor you can return bulbs to if there is problem, iii) get reliable 3rd party information such as from Consumer Reports or student projects, or iv) buy one bulb test it at home - if it works retrofit your entire home.

Page data
Retrieved from "https://www.appropedia.org/w/index.php?title=Compact_fluorescent_lights&oldid=631799"
Cookies help us deliver our services. By using our services, you agree to our use of cookies.
Categories:
Maintenance categories:
About Appropedia · Policies · Contact · Content is available under CC-BY-SA-4.0 unless otherwise noted.