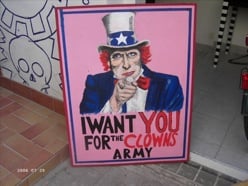 Recruiting for the Clownsarmy
Page data

Tired of boring demonstrations where you just tramp down the streets?

A new concept of creative protest evolved in the UK and was applied for the first time in the demonstrations against the War on Iraq in 2003 and against the G8 summit in 2005 in Scotland. It is the clownsarmy.

In more and more countries Clowns can no longer only be met in the circus or at chidren's birthday parties. The clowns gather and form armies to join protest movements.

Important is that they do not pretend to be clowns. They are not demonstrators that dressed up as clowns. Instead, they are true and full-fledged clowns that demonstrate. Similar to other armies, recruited soldiers have to be trained. That happens in boot camps also called "bigshoe camps". The curriculum covers lessons in spontaneity and improvisation. Furthermore civil disobedience and non-violent direct action. Flashmobs have to practice including marching and drilling. The more serious it is taken, the more fun it is.

In the nature of the clown lies a high potential for pointing out social injustice and other inconsistencies of today's society. They can easily disobey, criticize and name the truth, since they seem innocent and stupid while they are wise.

Clownsarmy means laughing and dancing between policemen and other authorities. The clowns wear the typical make-up with a white face and a red nose. Some clowns dress in camouflage, while in other armies all wear a complete clown's dress. The weapons of that special army might be water pistols, music instruments, street chalk, bonbons and confetti to throw, soap bubbles, juggling, unicycling...

With the help of paper-mâché and creativity a shopping cart can turn to be a tank. The army can also make use of the Demo Camp Units.