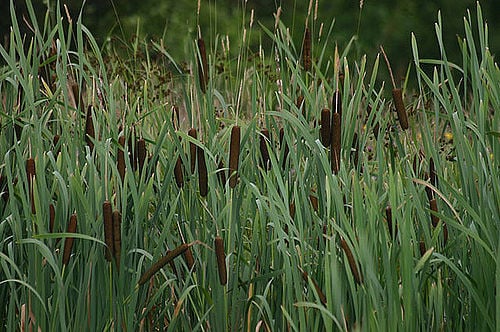 Cattails - a highly versatile plant that can grow on wastewater 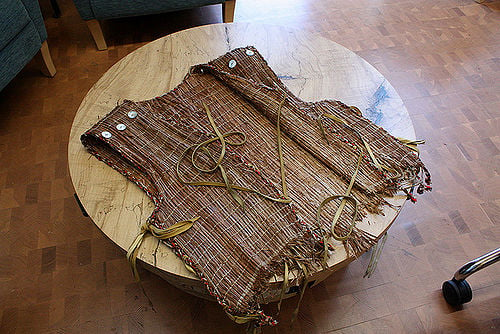 Cattail vest decorated with abalone shell. Abalone was traded up & down the coast.

CATTAIL CHEMURGY One of the remarkable things about the primitive American Indians was their use of innumerable plants for food, clothing, shelter, medicines and implements. The early settlers learned a lot from them but, as civilization progressed, much of that knowledge was abandoned and forgotten. Now a new science, called "chemurgy", is discovering that some of our abundant but neglected plants have undreamed-of possibilities. One of these is the common Cattail.

This is the familiar plant with erect strap-like leaves from 4 to 8 feet tall and, above them on a slender stalk, the cylindrical flower-head which is green and velvety in early summer when it resembles a cat's tail. The upper part contains the male flowers which drop off after they have bloomed and shed their pollen. The larger lower part contains the female flowers which develop into a brown plushy compact mass of as many as 300,000 very tiny seeds, each with a tuft of fine white hairs, that are spread by winds when the head opens in autumn.

It grows in marshes and wet places. In the Chicago region, near Wolf Lake and Lake Calumet for example, there are thousands of acres covered with dense stands of cattails. A war-time survey showed that there are at least 140 thousand square miles of cattail swamps in the United States.

One Indian name for the cattail meant "fruit for papoose's bed" because the fluffy masses of seeds are very soft and do not mat. During World War II, several million pounds of them were used to stuff life jackets, mattresses, pillows and baseballs. Compressed into wallboard, they make excellent insulation against sound and heat. A drying oil similar to linseed, a cooking oil and a wax can be extracted from the seeds, leaving a by-product of meal which is used in cattle and chicken feeds.

For centuries, cattail leaves have been used to caulk barrels, and twisted or braided into cords for making rush-bottomed furniture. The Indians wove them into waterproof mats for the sides of their lodges, and sleeping mats on their travels. Soft fibers, extracted from the leaves and stems by treating them chemically, can be used like jute for stuffing furniture and making twine, burlap or webbing. A stickly substance extracted from the stems may have value as an adhesive for paper, as sizing, or in facial and shaving creams.

The core of the thick branching rootstock, which grows horizontally in the mud, is very starchy. It can be cooked and eaten like potatoes, or dried and ground into flour used in baking and also as a substitute for corn starch. This flour can be fermented to produce ethyl alcohol valuable as anti-freeze, as a cheap industrial solvent, and for medicinal purposes. It contains more fat but slightly less protein than potato or wheat flours, and only potato flour has more minerals .

Some Indians made jelly from the rootstocks and they can be used for marmalade. In spring the young shoots, which taste something like a cucumber and are called "Cossack asparagus", are peeled and eaten as a vegetable or in salads. The young green flower-heads are said to be delicious when boiled or roasted. The pollen, which is very abundant and rich in vitamins and minerals, was harvested and used in bread by our American Indians.

Cattail marshes furnish nesting places and ideal cover for red-winged and the yellow-headed blackbirds, marsh wrens, rails, bitterns, coots and some kinds of ducks. The rootstocks are important food for wild geese and our most valuable furbearer, the muskrat, which uses the leaves to build its lodges.

In late summer, the flower-head looks like a "hot dog" on a stick.

I can think of no other North American plant that is more useful than the cattail. This wonderful plant is a virtual gold mine of survival utility. It is a four-season food, medicinal, and utility plant. What other plant can boast eight food products, three medicinals, and at least 12 other functional uses?

The Common Cattail (Typha latifolia) and its brethren Narrowleaf Cattail (Typha angustifolia), Southern Cattail (Typha domingensis), and Blue Cattail (Typha Glauca), have representatives found throughout North America and most of the world. While living in Northern Japan, I spent many chilly mornings in snow storms among miles of cattails while duck hunting. Cattail is a member of the grass family, Gramineae, as are rice, corn, wheat, oats, barley, and rye, just to mention a few. Of the 15 most commonly consumed domesticated plant foods, 10 are grasses. However, of more than 1300 wild grasses, none holds a loftier position as a survival food than cattail. Just about any place you can find year-round standing water or wet soil, you can usually find cattails.

In Euell Gibbons’ Stalking the Wild Asparagus, his chapter on cattails is titled “Supermarket of the Swamp.” As you will see, this title aptly applies to the cattail. However, due to its medicinal and utilitarian uses, we may want to mentally modify the title to “Super Wal-Mart of the Swamp.”

Blue Flag (Iris versicolor) and Yellow Flag (Iris pseudoacorus) and other members of the iris family all possess the cattail-like leaves, but none possesses the brown seed head. All members of the Iris family are poisonous. Another look-alike which is not poisonous, but whose leaves look more like cattail than iris is the Sweet Flag (Acorus calumus). Sweet Flag has a very pleasant spicy, sweet aroma when the leaves are bruised. It also does not posses the brown seed head. Neither the irises nor cattail has the sweet, spicy aroma. I have seen large stands of cattails and sweet flag growing side by side. As with all wild edibles, positive identification is essential. If you are not sure, do not eat it.

Corms, shoots, and spikes - In just about any survival situation, whether self-imposed or not, one of the first plants I look for is the cattail. As a food plant, cattails are outstanding and offer a variety of food products according to the season. In early spring, dig up the roots to locate the small pointed shoots called corms. These can be removed, peeled, and eaten, added to other spring greens for a salad, or cooked in stews or alone as a pot herb. As the plant growth progresses to where the shoots reach a height of two to three feet above the water, peel and eat like the corms, or sauté. This food product is also known as “Cossack Asparagus” due to the Russians’ fondness for it.

In late spring to early summer, some of my favorite food products come into fruition on the cattail. Soon after these shoots become available, the green female bloom spikes and the male pollen spikes begin to emerge. These spikes can be found in the center of the plant and form a cylindrical projection that can only be detected when you’re close to the plant. Peel back the leaves in the same way you would shuck corn, and both the male portion above and the female below can be seen. The female portion will later develop into the familiar brown “cattail” seed head from which the plant’s name is derived. The male portion will atrophy into a small dried twig that may easily break off the top of the seed head. Both the male and female pollen spikes can be boiled and eaten like corn on the cob, and both are delicious. The male portion provides a bigger meal at this stage. They have a flavor that is corn-like, but distinct from corn. I cannot imagine anyone finding the flavor objectionable. Both may also be eaten raw.

Pollen and root starch - Later, the male pollen head will begin to develop an abundance of yellow pollen with a talcum powder consistency that can easily be shaken off into any container. Several pounds of this can be collected in less than an hour. The traditional use of this pollen is to substitute for some the flour in pancakes to make cattail pancakes. This also works well with cornbread. Other uses of the pollen include thickeners or flour extenders for breads, cakes, etc.

In late summer to early fall, the tender inner portions of the leaf stalk may still be collected, but the availability of this Cossack Asparagus begins to dwindle, due to the toughening up of the plant. During this period and all the way to spring, the most abundant food product, the root starch, may be harvested. It is so abundant, a study was conducted at the Cattail Research Center of Syracuse University’s Department of Plant Sciences. The chief investigator of the project was Leland Marsh. The reported results were as follows:

Yields are fantastic. Marsh discovered he could harvest 140 tons of rhizomes per acre near Wolcott, NY. That represents something more than 10 times the average yield per acre of potatoes. In terms of dry weight of cattail flour, the 140 tons of roots would yield approximately 32 tons.

To extract the flour or starch from the cattail root, simply collect the roots, wash, and peel them. Next, break up the roots under water. The flour will begin to separate from the fibers. Continue this process until the fibers are all separated and the sweet flour is removed. Remove the fiber and pour off the excess water.

Allow the remaining flour slurry to dry by placing near a fire or using the sun.

Cattail root flour also contains gluten. Gluten is the constituent in wheat flour that allows flour to rise in yeast breads. The Iroquois Indians macerated and boiled the roots to produce a fine syrup, which they used in a corn meal pudding and to sweeten other dishes. Some Indians burned the mature brown seed heads to extract the small seeds from the fluff, which was used to make gruels and added to soups. Medicinal and other uses

The medicinal uses of cattails include poultices made from the split and bruised roots that can be applied to cuts, wounds, burns, stings, and bruises. The ash of the burned cattail leaves can be used as an antiseptic or styptic for wounds. A small drop of a honey-like excretion, often found near the base of the plant, can be used as an antiseptic for small wounds and toothaches.

They can be woven into baskets, hats, mats, and beds. The dried seed heads attached to their stalks can be dipped into melted animal fat or oil and used as torches.

The next time you see “The Super Wal-Mart of the Swamp,” why don’t you do some shopping?