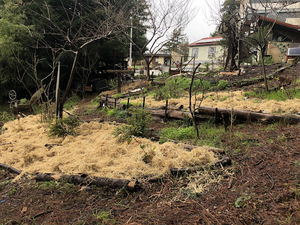 Food Forest setup as of March 2021

This project seeks to install a low-impact irrigation system for a budding food forest and to provide clear information on the full process so that it can be replicated elsewhere. This irrigation system uses collected rainwater, a water pump powered by a photovoltaic panel, two 1000 liters collection tanks, and gravity to irrigate on-demand. The system uses drip irrigation for water distribution and is triggered by a programable automatic water timer. Planning and installation of the irrigation system was achieved within one semester at Cal Poly Humboldt. To approach the project we began by getting ourselves acclimated with what goes into a solar irrigation system and learning how to work closely with our clients. We conducted a detailed literature review on the different components of a solar-powered irrigation system. Once we gained a base-level amount of knowledge, we created a detailed plan of approach and had weekly contact with our clients at CCAT. We created a budget for the required components. A series of prototypes were made using the information we gathered from our clients to ensure our final system would be successful and met their desired criteria. Construction and testing were completed over a period of several weeks on site. As of May 2021, the completed irrigation system meets the client's criteria and is fully functional.

The Campus Center for Appropriate Technology (CCAT) at Cal Poly Humboldt has established the grounds for a small food forest that is currently planted with a few saplings and covered in a layer of mulch. The vision is to provide a space for students and community members to harvest food throughout the years and to share knowledge about integrating landscapes that provide food security as an alternative to the lawns that currently dominate urban areas. This project was conceptualized in previous years by students and users of CCAT. Spring 2021 students have been assigned to create a solar powered irrigation system for the space provided for the food forest.

This project was an option of the Spring 2021 Engineering 305 class with instructor Lonny Grafman. The students undertaking this project are Luisa Close, Tineke Iris, Kyle Spears, and Samuel Killpatrick.

The following criteria will be used to determine what are the most important aspects of the project. The ranking system is 1-5, with 5 being the highest. The rankings will help to focus efforts and budget of the solar irrigation build.

The prototypes were created to represent the system to end users on paper or digital versions. Our prototyping was predominantly about having a way to visualize what the system looks like for visitors and the end-users.

One of the biggest issues was trying to decide on what we could use to indicate where irrigation lines were marked. There were many options that we went through before we finally decided on using large rocks. This can be seen in the farthest right image. The other two images present more developed versions of the eventual final poster set up for the poster.

Finally, we created a video with a 5 year old star actor (Max) to walk us through the current setup and indicate the changes that need to be implemented. The linked video provides a perspective what our prototype looked like as of April 2021.

It is important to note that much of the irrigation was already in place (see CCAT rainwater catchment drip irrigation system/OM) upon beginning construction and multiple improvements were required to make the system functional to the specification previously listed.

The current proposed timeline for this project can be seen on the google sheet. The Rolling Thunder team intends to have the setup completed by mid-May 2021.

The following depicts the proposed budget for the supplies needed to fulfill this project at CCAT. The majority of the supplies, such as the solar panel and irrigation pipes, are already in place or available on site. The major expenses were the pump and the corrugated plastic information sign depicting the setup for visitors and future end-users. Funding for this projects is provided by CCAT and HSU.

The amount of maintenance required aims to be as low as possible.

Clearing out the gutters which capture the rainwater periodically is important as these can become filled by leaves and pine needles over time. The system runs automatically due to the automatic timer, the setting on this can be modified according to the instructions on the automatic timer's user manual. The battery will need to be replaced annually in order to keep the automatic timer functioning (the timers screen shows battery health). The water tank should be cleaned periodically and the lid should be tightly secured to ensure there are no mosquitos breeding in the tank.

The rainwater catchment system needs to be cleaned periodically as well as the tanks. The system should be reviewed every semester to make sure all is functioning. The tanks obviously need water in them in order for the system to function. The pump will only function if the sun is shining directly on the solar panel. Pump maintenance can be found under the solar pump's user manual.

Beginning and end of drought months

Testing and operation instructions can be found in the video below

Power to pump from PV panel

The solar panel and pump were tested for flow rate and power provided to the pump from the panel. When the solar panel was in full sun the pump was drawing an average of 4.42A at 17V which is 75.14 Watts(W=A*V). At the power, the water was flowing from the bottom tank to the top tank at a rate of 31.5L per minute. To test the amps the negative line was broken from the pump to the solar panel. Testing the voltage was done simultaneously with a second multi-meter. The negative lead from the multimeter was touched to the same break in line where the multimeter testing the amps was and the positive lead was touched to the positive connection from the solar panel to the pump.

The flow rate was measured using a stopwatch. The stopwatch was running when the pump was in full power pumping water from the bottom tank to the top. The clock watch started at 200 liters and was timed until the tank reached 300 liters. This took roughly 9 minutes and 30 seconds, which is where the 31.5L per minute flow rate was measured.

After testing we have concluded that the system will work sufficiently to the requirements we wanted the system to meet. The testing results show that the panel provides more than sufficient power to move the water from the lower tank to the top tank. It should take approximately 95 minutes to transfer 1000 liters from the bottom tank to the top tank based on the flow rate with full power from the panel to the pump.

There are currently no leaks in the system. Our only major concern is that the water line breaks due to visitor's carelessness. Finding the leak may be a challenge for future users.

We recommend that the irrigation is set to water for 10 minutes every 3 days. This would release ~50 liters of water from the top tank per disbursement. That would allow for approximately 20 days total of releasing water. If spaced out every 3 days, this would allow one full tank to operate the irrigation system for ~6 weeks. This is subject to change depending on the clients' needs.

Throughout this project, there were many lessons learned around issues we didn't anticipate being issues at the start of the project. These lessons will help us be better prepared for future projects of this nature.

One lesson learned was learning how to meet the needs of clients and how to professionally interact with them. Trying to balance what the needs of the end-users and clients are with what can feasibly be accomplished in one semester challenging. An example of this was figuring out how we can mark where irrigation lines underground. We had to go through many different possibilities that were inspired by nature, not fully permanent, but still easily visible. The option that we were most excited about did not meet the client's needs, thus requiring a complete rework. Making sure we communicated with the clients about proposals and prototypes was a vital part of the project. We also had to learn how to communicate the system with end-users, especially since CCAT has new staff every year. We needed to figure out a way to provide information and a variety of tools to the end-users in a way that was useful and does not lead to an overload of information.

We also needed to deal with the issue of sunlight given Humboldt county's fluctuating weather patterns. If we planned a day to test the solar panel, and it was forecasted to be sunny, there was always the possibility that it would be cloudy. Having to be flexible and prepare some cushion time in case it became cloudy was necessary for this project to have successful testing.

Learning to start the project with a clear understanding of the initial layout of the site and its layout before beginning the project was a hard lesson. Had we gone to the site before starting our brainstorming process and prototyping, we could have saved lots of energy and time. We would have known that much of the system was already in place, and the main issue we need to accomplish was fixing the system and figuring out ways to improve it.

Testing the voltage, current (Amps), and power (Watts) generated from a solar panel using a multimeter was a useful skill learned. Being able to measure the power (Watts= Amp x Volts) draw of the pump from a solar panel was also a useful lesson. There were also parts of the project that seemed like they would be simple or would not require much research, however, in practice these portions lead to some of the most thorough work. An example of this was during the research and purchasing of the pump. Initially, we had not thought it would take much work or research to find a pump that would fit our needs. However, there were many factors to consider (head, flow rate, etc.), but research into this was crucial to get the longest life out of the system. We also had to take into account getting a size that works the best for our system to ensure the pump will have the longest life.

Beyond simply sticking to the maintenance schedule consistently to keep the system in working order, some possible next steps that could be taken in the future to improve the current design:

More information on the initial setup for this project prepared by previous ENGR 305 students can be found at: 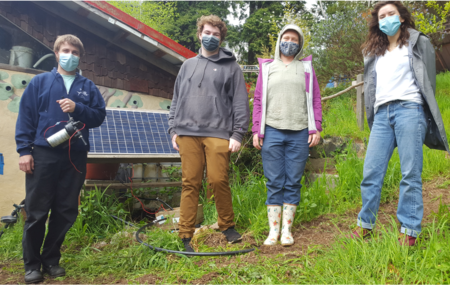 Page data
Retrieved from "https://www.appropedia.org/w/index.php?title=CCAT_solar_irrigation_for_food_forest&oldid=643325"
Cookies help us deliver our services. By using our services, you agree to our use of cookies.
Categories:
Maintenance categories:
Comments
Privacy policy · About Appropedia · Disclaimers · Mobile view · Content is available under CC-BY-SA-4.0 unless otherwise noted.
</html