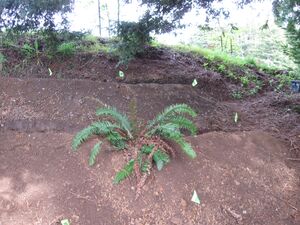 The Remediation Hillside is an Engineering 305 (Engr 305) project at Cal Poly Humboldt, created for the Campus Center for Appropriate Technology (CCAT) by Eric Haas. The aim of the project is to both demonstrate the usefulness and appropriateness of swale design in order to better utilize garden space, and also to turn the hillside into a space that can be utilized for years into the future by CCAT. The hillside will be reinforced against erosion caused by rainwater runoff and wind, and will become an aesthetically pleasing fixture for the CCAT grounds. In addition, from a remediation standpoint, the swales will sequester harmful pollutants that may run off from the parking lot located above the site.

This project is to be completed almost entirely with materials readily available at CCAT,and all of the labor required will be from CCAT volunteers. While most of the plants utilized will be transplanted from CCAT's gardens.

After the hillside was first cleared of major brush, the plot of land to be turned into the Remediation Hillside was given a very basic survey using an A-Frame to measure distances and angles. The hillside was divided by three lines running parallel with the hillside, and using basic trigonometry the distance at each point was determined. The result of this survey was a very basic dimension map of the hillside.

Each swale was dug such that large sections of decomposing wood could be fitted inside, which will both reinforce the hillside from erosion and provide nutrients for plants growing on the hillside. As they decompose, they also absorb water that trickles through the dirt, acting effectively as a large sponge that will provide the plants with a constant source of moisture through their roots. After some consideration of cost and efficiency, it was decided that both swales were to be planted with local Sword Ferns. Ferns are already present at the site and are profusely common in the area, making them ideal candidates for this site. Several already-existing ferns will also become part of the hillside.

The first step in shaping the hillside was to remove the layer of duff and forest litter that covered the hillside. This material was saved, so that it could later be replaced when the major digging for the project was done. Once the entire area was down to bare dirt, the two swales were dug horizontally across the slope, along the two top contour lines. This placed each swale roughly 5 feet apart. Each swale was roughly one and one-half of a shovel's blade in depth, and about a shovel blade's width across, though certain sections were made larger to accommodate larger logs. Large rocks and sticks were manually removed from the dirt as it was brought up, and was then shoveled into a long wall directly adjacent to the ditch on the downhill side. As it was created, the wall was periodically tamped with shovels to ensure that it did not fall apart or slide into the lower swale, and was gradually built up with dirt until it was roughly a foot above ground level.

After each swale was completed, decomposing logs were chosen and laid end-to-end in the trenches, then filled with dirt from the uphill slope above each swale, as well as dirt taken from various locations around CCAT. Each swale was filled with enough dirt to cover the logs to a depth of about 4 inches, creating the planting bed that the swales were made to house. At this time, the stored duff was raked back into place, covering the entire site except for the planting beds. The ground cover will keep the swale walls from eroding dur to wind and rain, and aid in decomposition as well as providing a habitat for helpful insects and organisms. Sword ferns were planted along each swale and the surrounding dirt covered in straw.

The hillside requires little in the way of maintenance, other than basic weeding and garden upkeep that is already performed at CCAT regularly. In the future, several long-term plans could be considered:

Overall, the project is open to whatever is needed by the staff at CCAT and its exact long-term plans are based on what it is to be utilized for.

The Remediation Hillside is always to be a work in progress, and it will serve as a probably launching-off point for future projects at CCAT. The scale and variety of the project had to be scaled back due to time and weather constraints, as a good deal of time was lost to poor weather conditions. In addition, a greater number of people working on the site would have sped up the process greatly, which would have made the impact of weather far less of a barrier.

The areas where plants are to be grown can be mulched in order to add nutrients to the soil, which is primarily clay throughout most of the hillside. Mulch can be created from shredded newspaper,[1] certain types of plastics, and other natural materials to cover the ground and prevent weeds from spreading.[2] For this project, mulch will be spread over the entire remediation zone to prevent incursion by weeds, with gaps left for the plants that will be planted at various places called 'Grow-through mulch'. This will not only allow plants to grow but will serve as a spot that organic materials can be disposed of and utilized as new mulch for the remediation area.

Along with the mulch for surface cover, the soil where plants are to be planted will be supplemented with organic compost made from local organic waste. This compost can be provided by both CCAT and the Cal Poly Humboldt campus. Organic wastes such as grass clippings, vegetable matter from kitchens, and old newspapers can all be mixed with the soil to provide nutrients for plants. Redwood logs provided by CCAT can also be buried beneath the plant beds before planting in order to provide nutrients and warmth from decomposition.[3]

The plants chosen for the remediation site will be nothing but native plants,[4] with a preference given to ones that can be transplanted from CCAT grounds instead of newly-purchased ones. As the area is heavily shaded, special consideration needs to be taken to choose the right plants for the amount of solar energy available. A Solar Pathfinder will be used to determine average sun for each area, and local plants such as Sword Ferns[5] and other forest plantlife will be planted around the beds.[6]

Page data
Retrieved from "https://www.appropedia.org/w/index.php?title=CCAT_remediation_hillside&oldid=643239"
Cookies help us deliver our services. By using our services, you agree to our use of cookies.
Categories:
About Appropedia · Policies · Contact · Content is available under CC-BY-SA-4.0 unless otherwise noted.