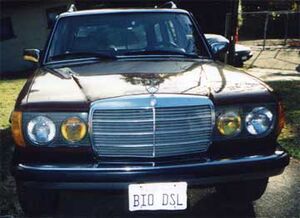 Biodiesel is an environmentally friendly alternative to petroleum diesel. The biodiesel produced at CCAT is made using used vegetable oil from Humboldt State University's cafeteria and local restaurants . Many different base oils can be used to make biodiesel, but the most common one is soy oil. The use of waste fryer oil turns an waste product that many restaurants pay to have trucked away into a biologically benign fuel that pays for itself.

One of the two vehicles we run on biodiesel. We are approaching 15,000 miles of road testing without a hitch.

According to Alan Weber, "biodiesel is as biodegradable as sugar and less toxic than salt" (quoted. in Joshua Biodiesel). Biodiesel burns cleaner than diesel #2 (standard diesel) and remains within the carbon cycle of the last three of four years, meaning that the soybeans grown a few years ago stored the same CO2 that is being re-emitted. This is distinct from fossil fuels, which re-emit CO2 from hundreds of millions of years ago and so increase the net amount of CO2 in today's atmosphere. Increases in the net amount of CO2 are the main cause of global warming. The main waste product of refining biodiesel is glycerin, which can be used as a soap, a nontoxic fertilizer, or for any of 1600 other products. 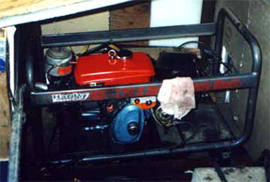 This is our Hardy 2.3 kW diesel generator. We use it as a back up for our solar panels and to "equalize" our battery bank periodically [at CCAT].

The Problem about biodisel is that you hardly get it in sufficient quantities from your local restaurant. In Germany it´s quite common that biodiesel is sold in petrol stations. It´s made out of canola/rape. Using excellent plant oil for wasting it in cars is ridiculous. Food prices rise (you drive with the plants instead of eating them) and a huge amount of rain forest will be cleared to produce even more soy beans (look at Brazil) if we all would switch to biodiesel.

By Sean Armstrong, Edmund Koontz and Celeste Peltier With special thanks to Andy Cooper and Panama Bartholomy (Fall 2001)