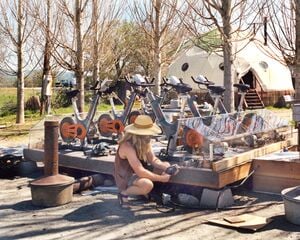 In 1995 Jon Schaffer, the president of Real Goods, approached Bart Orlando at the Hog Farm Pignic and asked if a pedal powered generator like the HEC could be built for display at the Solar Living Center in Hopland, California. When asked how much it would cost, Bart responded that he would build it in exchange for vegetables. Before work began on that project, Real Goods commissioned Bart to build a pedal powered tv/vcr. They paid Bart $1,000 in advance. This, Bart's first attempt at a pedal powered tv/vcr failed. To make up for that, Bart agreed to build the system (shown above) for just the cost of materials (~ $ 12,000.00). Bart worked on this project for close to a year. Bart would stop by when traveling to San Francisco on business trips and work on it for a few days at a time. The original design of the system was made by Bart. Steve Harmon, of the Solar Living Center built the wooden platform and rewired the system to meet legal safety codes. This system charged a 12V battery bank which powered a sine wave inverter that supplied electricity to the bass amplifiers for Merle Sauders and Doctor Loco at the 2001 Sol Fest. It is now on display next to the straw bale retail store building at the Solar Living Center. It is Bart's hope that one day each of the bikes will be connected up to a variety of electrical appliances in an interactive display which does more than simply charge a battery bank.