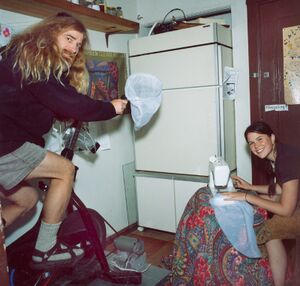 Bart Orlando and Kati McGuire first demonstrated the use of a pedal powered electric sewing machine at CCAT in 2003 while sewing the net for a prototype of an indoor home insect net ... a non-violent alternative to fly swatters. The same pedal powered electric generator that runs the electric blender was used in the experiment. The generator is a 1/3hp, PM motor which can be geared to produce 110v dc while pedaling at about 90 rpm. So, it seems that some sewing machines are built using universal motors which run on both ac or dc. However, as with the blender, none of the speed controls function on dc. Instead, the rpm at which one pedals determines the speed at which the blender or sewing machine operate. The faster one pedals, the higher the corresponding generator output voltage and the faster the appliance runs (and visa versa). To date, none of the ac appliances powered with the dc generator have shown any signs of damage. Some ac appliances do not use universal motors, and they will not run on dc.