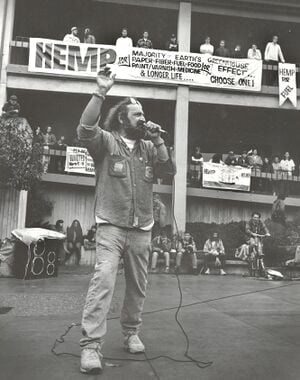 Bart Orlando built his first pedal powered electric generator in 1989 while traveling through New Mexico with the Global Walk For A Livable World. (PHOTO of the Global Walk arriving in New Mexico). It consisted of an exercise bike and a belt driven car alternator. While at the Santa Fe Renewable Energy Fair, Bart met Windy Dankoff who donated a permanent magnet dc generator and explained how it was more suited for pedal power application because it had a much lower rpm rating then the alternator. Windy further explained that alternators were less efficient than permanent magnet generators because a significant portion of the electricity generated by the alternator was used to power an electromagnetic coil within the alternator. The bike was used to power the PA system for the anti-Persian Gulf War protests on the Arcata plaza in 1991. The pedal powered generator is shown on the right side of the above photo suppling electricity to a PA system used for a HEMP RALLY featuring Jack Herer on the Quad at HSU in 1990.