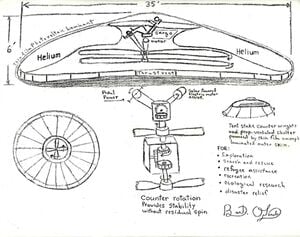 This is a diagram of a human powered airship. It is shaped like a disc and so can be considered a lifting body. The lenticular/parabolic shape of the airship is very aerodynamic and has a low cross-sectional surface area, reducing the effects of cross-winds. The weight of the vehicle, pilot, passenger and cargo is balanced by internal chambers filled with buoyant helium gas, rendering the vehicle almost lighter than air. The net weight of the vehicle is countered by lift provided by two counter rotating 10 ft diameter propellers. A mechanical transmission, shown in the diagram above, is used to reverse the direction of one of the propellers. Counter rotation cancels out residual spin and eliminates the need for a tail rotor, while providing angular momentum for stability. An alternative method would be to drive each propeller with its own electric permanent magnet motor, each motor being wired in reverse polarity with respect to the other. The pilot would pedal an electric generator to supply electricity to the motors rather than pedal powering a chain driven transmission. The counter rotating propellers are powered by a combination of human pedal power and an electric motor which is supplied with electricity by a thin film photovoltaic fabric laminated to the outer body of the inflated airship (made of the same material used in the fabrication of blimp envelopes). Within 25 years it may be possible to substitute a lighter/stronger material made of pure carbon Fullerene. It is 100 times stronger than steal, lite as foam and theorized to be so stable that it is capable of self sealing when punctured. The fact that the airship is inflated means that in effect, the pilot is surrounded by an exterior airbag, capable of cushioning collisions. The helium filled chambers are baffled in case of punctures. This vehicle would be capable of flying at an altitude of 3,000 meters ( ~ 10,000 ft ). However, most flying would be done at about 3 meters ( ~ 10 ft. ) above the ground to take full advantage of an energy saving phenomenon of aerodynamics known as the ground effect. The design of this vehicle would also enable it to hover at any altitude within its altitude range. Since this vehicle combines the low flying techniques of the Northern Harrier and the Hovering technique of the White Tailed Kite, It could called a KARRIER, ( kite + harrier = karrier ). Steering is accomplished through banking (using fluid hydraulics to shift weight from side to side or back and forth) and thrust vectoring (via air vents along the side of the airship which direct air from the propellers). The airship would be capable landing on water. If on land, counter weight tent stakes (driven into the ground) and attached to guide lines would render the vehicle lighter than air and capable of functioning as the roof of a buoyant shelter from rain or the sun on a hot day. While in "shelter mode" the guide lines could support a tent fly and the solar powered propellers could provide ventilation. One such airship could shelter almost a hundred people if used in a rescue mission. An armada of such vehicles could be used to assist refugees fleeing a disaster area, a war zone or genocide. Larger airships, known as cargo lifters, would be capable of airlifting relief supplies directly where needed without the need of roads, airports or even......permission... by flying low under the radar and using cloud cover to prevent detection during their initial approach. When traveling along established routes, the airship could be tethered to a steel cable via a frictionless permanent magnet collar so as not to be blown off course. It would be analogous to a buoyant gondola moving along a stationary cable. I propose that this airship be constructed as a collaborative effort by the Arcata Kinetic Sculpture Lab and the Wing Inflatable River Raft Company. It would be great if the project was funded by Discraft. A cool promotional slogan might be..... You're as free as a bird on a Wing! As its first public demonstration, it should be entered in the Arcata Kinetic Sculpture Race as ..................