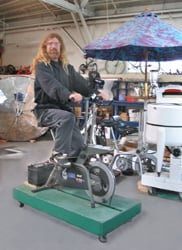 Designed and Built By Bart Orlando. With the Assistance of HSU Students At CCAT
Project data

The pedal powered battery charger was designed and built by Bart Orlando at CCAT in 1996. It can be used to charge a 12v battery. The system consists of an exercise bike placed upon a pedestal as shown in the photo below. A fanbelt raps around the outer circumference of a 40lb - 16" flywheel and passes through a slot in the top of the pedestal. It then raps around a 2.5" pulley on a 1800rpm permanent magnet 24dc generator, mounted on the underside of the pedestal. When the exercise bike is pedaled at ~ 80 rpm, the generator spins at about half its rated rpm (~900 rpm), producing about half its rated voltage output (~15 volts). The faster you pedal, the higher the generators voltage output and the faster the battery charges. A diode is placed between the generator and the battery to prevent electricity from flowing back from the battery to the generator. If the diode was not used, the generator would draw electricity from the battery and function as a motor. A volt meter and amp meter are substituted for the mph gauge and effort gauge that come with the original exercise bike. The system was used to match the load of a 200 audio watt alpine car stereo amplifier driving a 200 audio-watt JBL speaker cabinet. The pedal powered PA system was used during open mike sessions on the HSU Quad for crowds of up to 400 people. It requires very little effort to pedal when used to power that PA setup. This charger is best suited for charging batteries under 100 amp hours. However, in 1998 class credit was offered to HSU students enrolled in a physical education exercise class for helping to charge CCAT's 2,000ah battery bank by pedaling one of the five pedal powered generators at CCAT instead of the life cycles in the university's weight room.