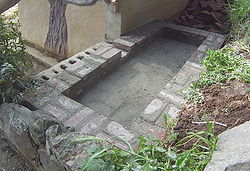 Why pay for water when it falls into our laps every year? We have barely begun to take advantage of the free resource potential of rainwater. Instead of wasting energy to distribute water after gravity has already brought it to its lowest elevation, we can capture the water before it falls too low to use and let gravity work for us instead of against us. The CCAT greenshed is in need of a working rainwater catchment system that can supply a hand washing station and food garden with sufficient water. CCAT had one installed in the spring of 2011, but due to a lack of head the system could not provide enough pressure to supply a sink and faucet with water. This project will improve the design and create a system that works and provides water for the Food Forest.

The objective of this project is to design and construct a rainwater catchment system for the CCAT greenshed which can be fed to a hand washing station as well as the Food Forest. The new design will solve the issue of insufficient head to supply a sink with water, and it will effectively recycle the water back into the garden or greywater marsh. Any excess water not used by the hand washing station will flow into the Food Forest.

CCAT already has many usable materials available, like pvc pipe and storage tanks. There are already gutters and a first flush system set up from the previously attempted handwashing station.

We're not re-inventing the wheel, let's find out what's out there first.

People throughout the world travel large distances to retrieve water for their daily needs. A functional rainwater harvesting system can liberate females across the globe from this daunting task. Before you go out and help the world there are some basics that you need to know. First, gravity is your friend not your enemy. Second, the roof should be adequate and be of the right surface materials. Third, does the quality of the water being contained satisfy the needs? In other words, don't triple purify your water if your going grow your plants with it.[1]=== Rainwater Harvesting Concerns ===

Some concerns over the project include its aesthetic value. Ideally, we would like to incorporate some more natural looking features into the final product. Another concern is where the water is going to be diverted to after it passes through the wash station and the drain. The system will be a simple design with hopes to eliminate a lot of unforeseen problems.

There are basically four different types of rainwater catchment.

These systems can vary between thatched type roofs to mud to galvanized iron. They usually involve a gutter system that channels the water to a centralized tank.

These systems use a sloped piece of land to funnel water down to an underground storage tank.

These systems are similar to ground catchment but use rocks to divert the water to a specified pool. In a sense you are creating a natural reservoir.

These systems utilize an aggressive planning strategy to make water flow about to its desired locations.[2]=== Designing interpretive materials ===

According to Pacey and Cullis interpretive materials for rainwater catchment should include a roof, a gutter, a downspout, and some form of storage tank.[3]== Design ==

Originally water collection tanks were going to be used, but we decided to build a brick trough instead, for its durability, aesthetics, and capacity. PVC pipe was lain down from the base of the retaining wall to the bath tub by the food forest. A bucket was put in place with a grate on top to catch the falling water. Gravel was spread around the area where the trough is as a base layer, then boards were placed over the gravel to help create a level surface for the bricks. The trough was built with two brick thick walls to withstand water pressure. A faucet was placed near the base of the tank, and the bottom of the tank was raised to the faucet's level with mortar to avoid standing water. The inside was lined with an old water bladder, which can be removed for maintenance or cleaning if necessary.

Page data
Retrieved from "https://www.appropedia.org/w/index.php?title=CCAT_greenshed_rainwater_catchment&oldid=640443"
Cookies help us deliver our services. By using our services, you agree to our use of cookies.
Categories:
About Appropedia · Policies · Contact · Content is available under CC-BY-SA-4.0 unless otherwise noted.