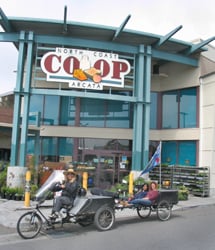 In 1990 Bart Orlando took the propane powered chevy 350 engine out of his motorhome, parked it in Arcata and purchased a 10 speed Motobecane ( Translation - motorized bicycle! ) from the Arcata recycling centers bike refurbishing shop staffed by Bob Orneles. The bike was being sold as part of a fund raiser for the 100th Monkey Project, organized by Rick Springer. The $100.00 used to purchase the bike went towards covering the expences for the organizations trip to a protest at a nuclear weapons testing range located in Nevada on Shoshone Native Land. While in Nevada, Rick decided to pay a visit to The American Broadcasters Award Ceremony taking place in Las Vegas. At the climax of the event, a large glass sculpture of an American Bald Eagle was presented to Ronald Reagan. It was at that moment that Rick walked on stage, brushed passed Ronnie exclaiming..... EXCUSE ME ... MR. PRESIDENT ! ..... picked up the glass eagle and threw it to the floor, smashing it to pieces. Rick reached the podium, took a deep breath, raised the index finger of his right hand as if to make a moral point. However, before he could utter a single syllable in protest of nuclear weapons testing , he was tackled by secret service agents. A photo of Rick Springer at the podium, index finger pointing high in the air, his first syllable just taking shape, appeared on the front page of every major U.S. newspaper. As for Bob Ornelas, he went on to become the mayor of Arcata. In 1993 Bart out fitted his bike with a pedal powered electric generator and used it to power the PA system for a speech by the late David Brower at HSU. The event was organized by CCAT. and marked the beginning of his "volun-ten-year" at that facility.

For 15 years Bart has gradually improved the design of his vehicle while using it for transportation on a daily basis. Bart Commutes 8 miles from McKinleyville to Arcata where he shops at the Arcata Co-op, volunteers at CCAT and the Library Bike Center. Commuting between adjacent cities demonstrates that this vehicle is more than adequate for running errands around town. His commute along the emergency lane of the 101 freeway requires crossing the Mad River Bridge. This four lane bridge only provides a very narrow bike lane less than one foot wide. Cars traveling at speeds exceeding 65 mph pass dangerously close to bicyclists, some of whom become panic stricken and freeze up, unable to continue. Bart critical masses the slow lane of the bridge, claiming the right of bicyclists to be there and focusing attention on the fact that the Mad River Bridge should be retrofitted with safer bike lanes! His current critical mass record is 35 cars, a big-rig truck, a logging truck, a dump truck and a U-HAUL van, all following behind him at 20mph for the length of the bridge. Bart's bike is a prototype. Properly founded, such a vehicle could be built out of light weight material, equipped with light wieght lithium-ion batteries and an onboard solar array. Ken Beidelman of the Arcata Kinetic Sculpture Lab and John Davis of Arcata Electric Car provided a great deal of assistance in the fabrication of this vehicle.