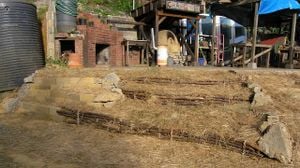 Slope erosion causes sediment transport in water runoffs that is drained to waterbodies through rainwater sewer. High sediment levels impair aquatic life and reduce water quality. In that context, it is then important to control soil erosion by different methods. Moving the CCAT building to a new location has caused new problems related the topography of the new location and should be addressed.

The big open space by the concrete slab near the orchard has a sloped section that could need some erosion control. It would be interesting to develop some plantable space there to maximize use of this area since it is not really feasible right now with the steepness of the terrain. Since there is another project this semester working on compressed earth bricks, it would be interesting to work together to maximized the use of resources and to complement our projects.

Slope erosion is caused mainly by the effect of wind, ice and rain. In the Pacific Northwest, rainfall is the most important factor.[1]

Erosion can be controlled by reducing the runoff water going over the slope and by modifying site conditions. Those properties can include the soil type, the steepness and the size of the slope and the vegetal cover.[1]

The soil type of the hill cannot be modified, except superficially, so we are planning to concentrate our efforts on the profile of the slope, adding some plant cover and using some of the following techniques. The benefits of having a densely planted slop are numerous, the plant with its leaves, reduce the amount of rain touching the ground by absorption and evaporation. The roots help consolidate the hillside and keep soil particles together.[1]

Slope protection will have to be designed in function of the time variable. Some protection is going to be needed from the beginning and up to, hopefully, a long time to come. Using mulch in the beginning is interesting because its effect is instantaneous and it provide a cover for grass, which is the second element to offer protection. After a longer period shrubs and trees will have to develop new roots and consolidate the earth.[2]

Seeding is the easiest method and should be used in conjunction with other methods. After the seeds have been put in place, mulch should be put over the ground to protect the future seedlings from wind and water erosion. This technique is good for mild erosion and grass is relatively fast to grow so a shallow root layer is created to combat soil erosion. A diverse mix of native plants ranging from grass to shrubs and trees should be used.[1]

This method is relatively fast, it is at leat faster than waiting for plants of an interesting size to grow from seed. It is considered good practice to group different plants together so the root system can be diverse. Also, if some species are less adapted to the conditions of the hill, the dominant ones will take over. This method is the most expensive.[1]

If hardy woody plants are available, cuttings from those plants can be used as live stakings. 2 to 3 feet long stakes are inserted in the soil and eventually roots will grow and help support the hill. Species should be carefully selected because the stakes need to be taken from a shrub that roots easily.[1]

This technique use live staking to support long wattle made of tree branches that are partially inserted in pre-excavated horizontal trenches following contour lines of the slope. This technique is efficient against high runoff water but is material and time consuming.[1]

Ground covers in the form of straw or mulch help to control erosion by reducing wind effects on soil particles the the ground. It also absorbs water during rainfall which helps reducing runoffs and their effects on the soil.

The criteria and their respective weight used for the following Delphi decision matrix are:

First, the site conditions should be carefully examined. It is located six feet from the CCAT house on the steepest side of the slope, and on the other side it is right beside the main pathway from the street and the house to the orchard. The back of the slope is level with the old concrete slab.

Next it is important to characterize the steepness of that slope. To do that, the easiest way I found was using a strait edge resting on the slab since it is at the same elevation than the soil on top of the slope and it is important to make sure the straight edge is leveled. Then, I measured the height from the ground in front of slope to the bottom of the straight edge. This is the vertical component (dy) of the slope and it is called the rise. For the horizontal component (dx), the run, I measured the length of the straight edge to the bottom of the hill.

The range of the slope is from 29% to 83%, which is relatively steep. A wide range like this means that it should not be dealt with a single approach but mix different mitigations methods over the work area.

The soil material in the work area is perfectly suited to be used in Compressed earth brick (CEB). Since CBE making is another project this semester, it made sense to work together. Eghan would use the soil that I would remove and use it to make bricks that would be used to make retaining walls to solidify the slope. From an Appropriate Technology standpoint it makes perfect sense to use this synergy to our advantage, both project will have the possibility to use materials literally feet away.

The different components of the system will be as follows:

Compressed Earth Bricks used on the steepest side to create a retaining wall to gain the maximum height in the lowest horizontal distance to reduce slope to a minimum, a flat surface would be ideal but will not be achievable everywhere because of stacking and stability limitations. To fulfill the multi-usage criteria, it would be a good idea to form terraces that could be use to grow a variety of plants depending on the needs of CCAT members.

As described earlier, contour wattling uses long wood branches or sticks tied together to form a barricade that will slow water down. On this project I plan to modify this design by using 3' pieces of rebar hammered into the ground (1' out and 2' in the ground, for stability) to support some vertical stacking of the sticks. This will help to reduce the slope of the hillside and to continue the terraces over to the gentler side of the hill. I will limit the height of the wattling to under a foot since CCAT had problems in the past with higher ones.

At the completion if this project in mid-May, the rain season will be finished and low precipitation will prevail for the next four months. Straw will then be used as a ground cover from the project end up until planting occurs. This will give choices to the resident on what they want from the planting spaces created.

The proposed design will try to follow as closely the natural contour lines to minimize dirt handling, to disturb as less soil as possible to keep the hill side at maximum strength and for aesthetics purposes.

Since the number of bricks available is not definitive, the contour wattling will have to start after the completion of the retaining wall. The preliminary carving of the hillside should start at the same time as the brick making process since the material dug up will be used by those bricks.

The first step was to remove the organic layer from the hillside so it would not mix with the material we were trying to harvest for the brick making process. All the soil was piled separately and was disposed.

After that we need the good soil and we started carving the slope following contour line. The goal was to create a flat surface 6" deep to sit the bricks on. The back wall was carved almost vertically to minimize the integrity of the slope.

For the reason stated earlier, I decided to start the installation of all the bricks first to see how far I could go and then switch methods to complete the work on the hillside. The bricks were used on the steep side of the hill, since it is there that they are more needed. Prior to installing the bricks I made sure the ground was leveled and compacted. Bricks need to be well seated to reduce sliding and to maximize strength. Bricks were stacked 2 high and an offset was included to increase the stability (see figure). Bricks were positioned half-way over the other one to reduce joint length between them. After the installation of each brick, I compacted soil behind it give some stability and to reduce soil movement when earth will settle.

To begin, I started by sorting ~6' wood sticks and trying to match their curve with the curve of the hillside. This will ensure that not to much bending force is put onto the wood. Then, I hammered two 36" rebar 6' apart into the ground. The first stick is then wedged between the slope and the rebar, all the other one are stacked one over the other to form a small wall around 10". I used hemp twine to tie the wood sticks together and to the rebar.

At both extremities of the hillside I used some urbanite fragments to close the area that will become terraces. I then graded the ground to create uniform surfaces and covered those with straw to reduce erosion.

I tried using as much as possible locally available and used materials to reduce the ecological footprint of this project. This project is more labor-intensive than material-intensive since the earthwork took times and so are the bricks. The compressed earth brick production is time consuming and is nearly-impossible to do single-handed.

All the free materials was given by CCAT.

The new slope of that hill is calculated by removing the height of the walls that were installed to the total height of the hill.

As you can see the slope on both sides of the hill was substantially reduced. This will slow down the water and diminish its effect on the soil. With the addition of a soil cover it will further control slope erosion.

Regarding the appropriateness of this project by using the stated criteria, I think some criteria were fulfilled, like: Cost, Use of Natural Materials, Aesthetics, Ease of Deconstruction. But, time will tell how well it fulfill other criteria like durability, security and multi-usage.